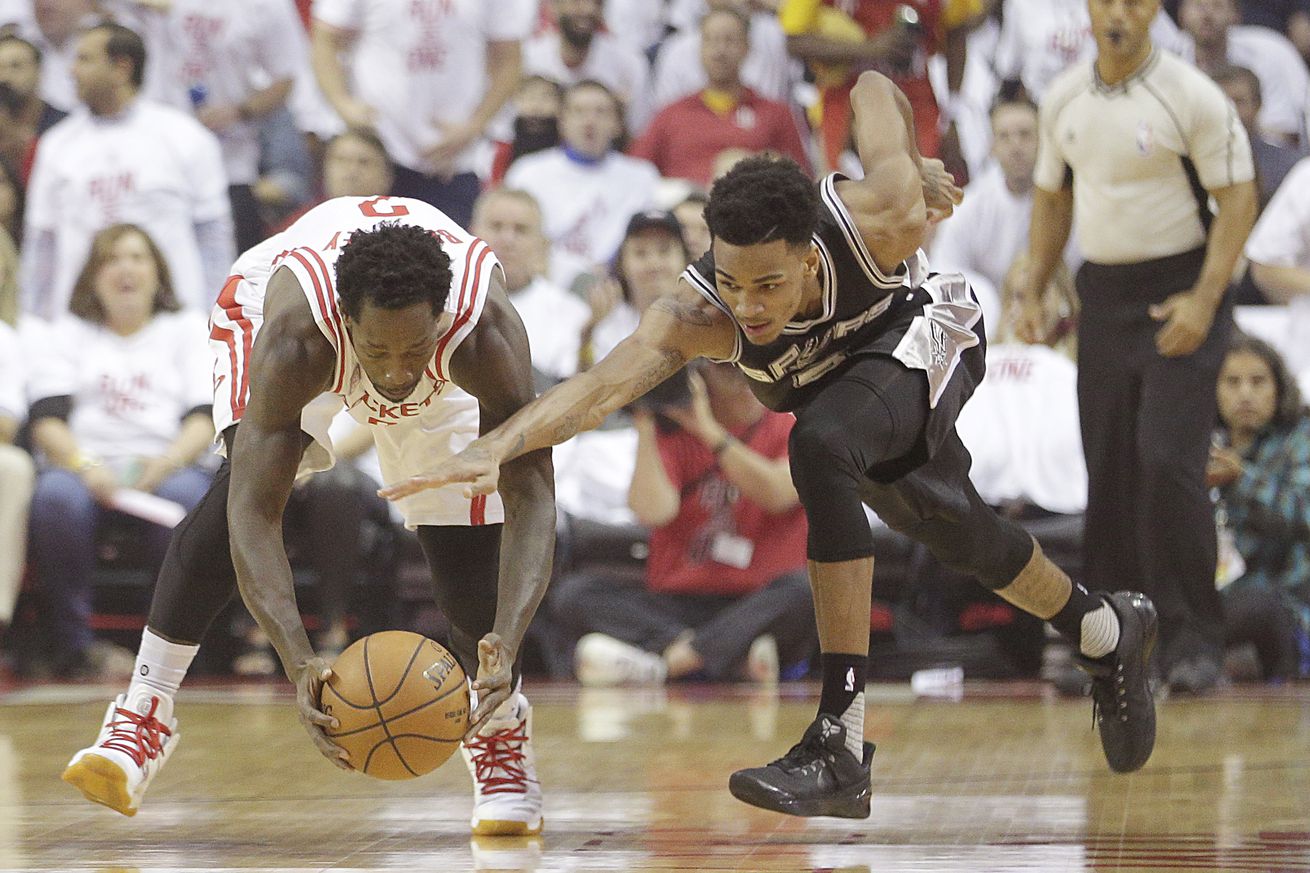 The Kid had a number of eye-popping plays in his first year, but this one stands out for a number of reasons.

In the interest of getting ready for the coming year when some of the San Antonio Spurs‘ youngsters will likely have a plenty of opportunities to show what they can do, I want to take a close look at a play that provides a glimpse of Dejounte Murray’s talent, and may be something we look back on years from now as evidence that showed the promise of the player he would become.

The steal occurred in the fourth quarter of Game 3 of the Western Conference Finals against the Golden State Warriors. Now, I have no recollection of who won this game — or the series for that matter — and I’m having a hard time trying to remember either of those things because I just can’t stop watching Murray’s exquisitely immaculate pickpocketing of Shaun Livingston.

This bit of brilliance is set up because Bryn Forbes is hounding Livingston while the Warrior brings the ball across the half-court line. In order to gain some space, Livingston works toward the middle of the court around a screen, which frees him from Forbes, but attracts the attention of Murray who is waiting for his own man to make it up the court.

Murray is fully locked onto Livingston, and as soon as he comes around the screen, he attacks. The first amazing thing I notice is that he’s able to make any kind of significant play on the ball with the bad angle he initially takes. But he’s quick enough to make up the distance lost, and long enough to get to the ball even from the less-than-perfect position his first step puts him in.

But enough quibbling, once Livingston turns up the court, seemingly unaware that he’s being hunted, Murray pounces. With two quick steps, he changes his momentum from going parallel to half-court line, to fully north-south, matching Livingston’s speed as he reaches with his left hand, past the Warrior’s body to tap the ball back to where Livingston just came from.

Which brings us to the part of the steal that separates it from your ordinary feat of athleticism. Having liberated the ball from Livingston’s control, Murray executes a move I don’t believe I’ve ever seen before. In a single motion, while facing his own basket, he pivots on his right foot away from the ball, takes possession of the ball with his right hand by dribbling behind his back while reversing his momentum, before sprinting back toward Golden State’s basket with a left-handed dribble.

The result is a left hand, right hand, left hand, right hand contacting of the ball: from steal, to control/dribble, to sprint dribble — all while doing a 360 degree turn. The coordination alone is off the charts, but the speed with which all of the above is carried out, and the agility demonstrated, blows my mind just a bit.

I have another of Murray play in mind to show the same kind of promise on offense, and can do that one soon if there enough interest in it.