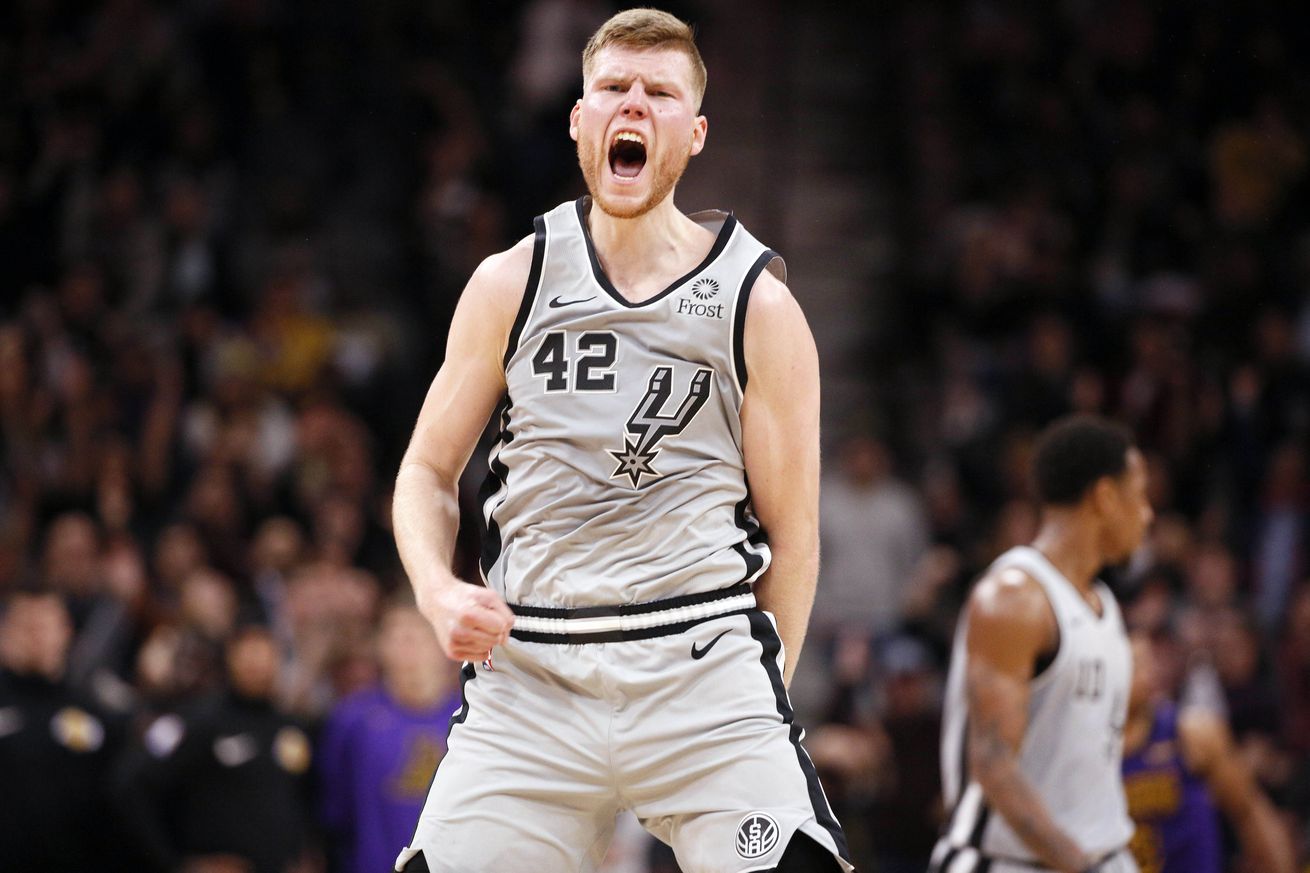 The Latvian Laser showed off his playmaking skills against the Pistons

The Spurs’ victory over the Pistons on Monday night was another total team effort. With 5 players scoring in double digits and 8 players contributing 24 assists, the Spurs egalitarian offense continued its tear through opposing defenses, scoring nearly 128 points per 100 possessions against the Pistons’ 12th ranked defense.

The twin pillars of the team’s attack, DeMar DeRozan and LaMarcus Aldridge, were their usual outstanding selves, combining for 51 points on a true shooting % of 68.2. But on a night where the team was without their 3rd leading scorer in Rudy Gay and their outside shots weren’t falling at quite the usual clip, the team got the extra boost it needed from an unlikely source.

Davis Bertans, who is currently 3rd in the league in three point accuracy, hit just 1 of his 4 attempts from distance, but still led the team with a plus/minus of +16 in his 24 minutes. That’s even more impressive considering he spent 21.5 of those minutes on the court with Blake Griffin as his primary defensive match-up.

Though Davis did a good job against Griffin, “holding” him to 50% shooting and 17 points on 14 shots isn’t exactly lock down defense. The Spurs defensive scheme sent a lot of help to whoever was guarding Griffin anyway, so even that isn’t necessarily attributable to any individual. The difference Davis made was on the offensive end.

The Spurs’ offensive rating with him on the court in this game was an astronomical 144.9. Single game numbers are typically very noisy, but for a team to score at such an efficient rate while a player on the floor is having an off shooting night indicates there’s something else going on. In this case, Davis’ gravity and here-to-fore rarely seen play-making ability took the Spurs’ offense to another level.

Davis finished the night with a career high 5 assists that generated 13 points. He also had 6 screen assists, generating 14 points. Though there’s some double counting there with Davis contributing both an assist and a screen assist on the same play, those are incredible numbers for just 24 minutes of play.

He did an excellent job of just being in the way at the right moment.

He showed the ability to find an open shooter on the opposite side of the floor and throw him open.

The Spurs must practice this. Both DeMar and Derrick White had very similar passes in this game.

And he hit LaMarcus and Jakob Poeltl on rolls with beautiful looks.

The jump pass was nice, but that Marco-special to Jakob was a revelation. Even when he didn’t have the ball, Davis’ impact on the defense was clearly visible.

The side pick-and-roll with an empty corner and a knock down shooter setting the screen is a nightmare to defend, and the Pistons aren’t ready for it here. They appear to be trying to play it straight up, without bringing help from the weak side, but Reggie Jackson clearly thinks he has help baseline. That can’t work, because there’s just no way Griffin can drop to help on a pick-and-roll with Davis popping to the three-point line. The result is an easy layup for Derrick.

While some of his passes were welcome surprises, Davis’ impact on the offense is nothing new. Per Cleaning the Glass, the Spurs score 7.5 points per 100 possession more with him on the court. Most of that is due to his incredible shooting. For the season, he’s averaging right around 1 assist and 1 screen assist per game. If he can continue to pass and create opportunities off the ball like he did in this game, the Spurs’ offense could still somehow get even better.