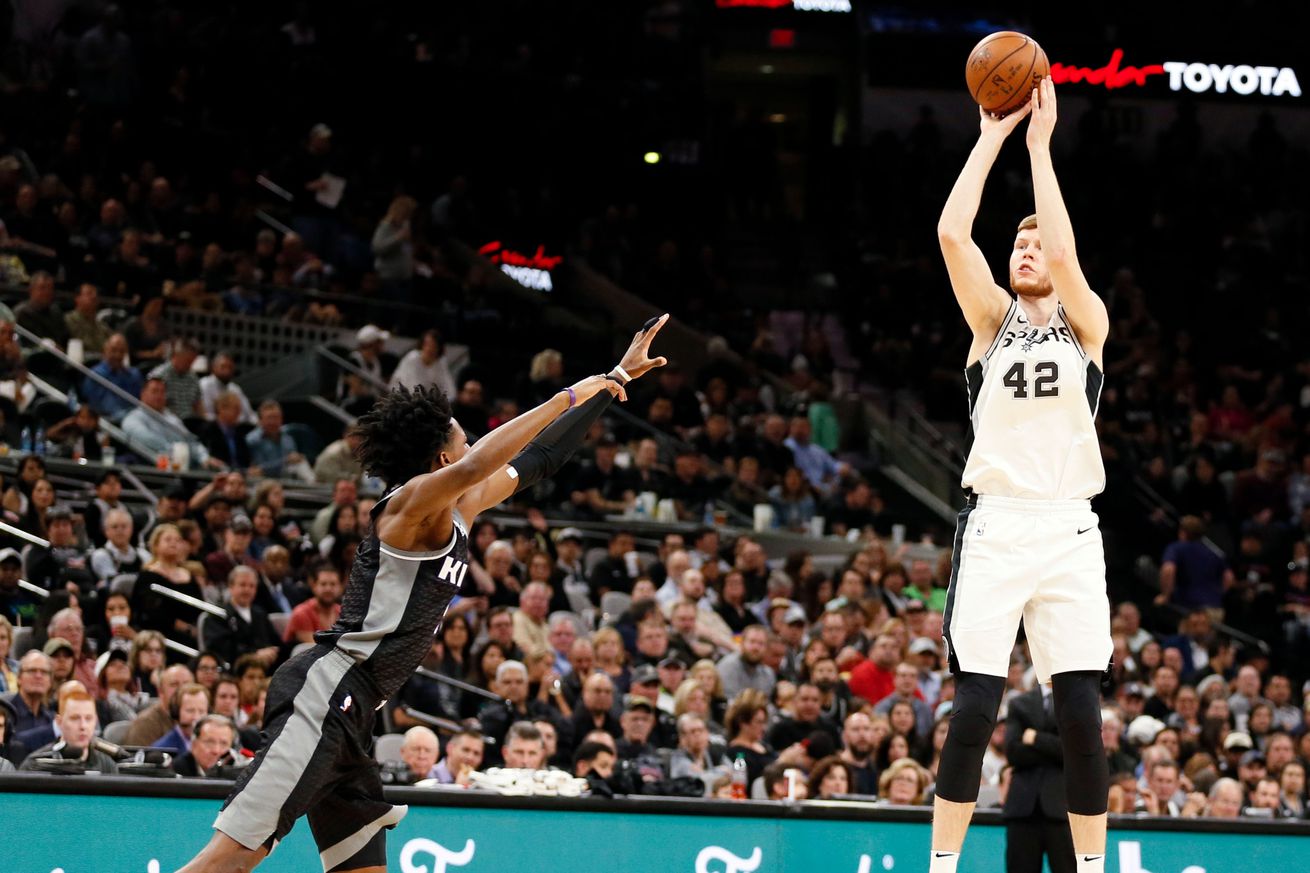 The Spurs re-signed Davis Bertans and the NBA yawned. There were no parades in downtown San Antonio either. I’m not calling for a parade, but Bertans is a good investment. He has plenty of upside, and this year, he’ll have ample opportunity to show just how valuable his particular skill set can be to a team that needs to find ways to score the ball. The 25 year old Latvian is a pure shooter with ridiculous range, supreme confidence, a high basketball IQ and the ability to stretch the floor like few big men in the NBA.

Bertans doesn’t think twice about taking shots 3-5 feet beyond the arc, and Pop doesn’t chew him out when he does (for the most part). Why? Because he has the ability to consistently knock down those shots from the parking lot if he gets regular minutes, and this year, I expect him to get those minutes.

Beyond his textbook shooting motion and exceptional range, Bertans has an ‘it’ factor that analytics and statistics can’t account for. Statistically, he shot 44% from the field last season and 37.3% from beyond the arc. Those aren’t the most eye-popping numbers, but numbers never tell the whole story of a player.

Question: If you’re a coach and you need a 3 point shot for the win, and you have one of four guys on your roster to choose from, which of the following do you want taking that shot:

But, what if you had more information, the kind that doesn’t show up in box scores? What if one player had a reputation for running through long stretches of being either white hot or ice cold? Nerves are not his problem. Consistency is. Does that impact your choice?

What if one player had a reputation for being consistent during regular season games but often disappearing in big games, or under pressure?

What if you knew that two of the players had a reputation for thriving under pressure?

You’ll take Horry and Elie, both of whom had much lower percentages than Bonner. And you’d do so because both had ice in their veins and thrived under pressure. Their legends were built in those moments.

Either could be having a horrible shooting night, but with the game on the line they could knock down the big shot and deliver the kiss of death because they embraced the moment. They didn’t get rattled. That’s a special ‘it’ factor.

Bertans has shown those intangibles. He doesn’t get rattled easily. This is not to say that Davis becomes the next Big Shot Rob, but it is to say he has potential to be a clutch shooter, and that’s a nice weapon for a team to have in its arsenal.

Confidence matters when the pressure is on. Like great cornerbacks, great shooters have a short memory. They don’t overthink. If the last five didn’t go in, the next one will, because they are shooters, and shooters shoot and make shots.

Bertans is not Matt Bonner.

In his first two years with the Spurs, Davis showed things most Spur fans didn’t think he could do. When he wants to, he can put the ball on the floor and throw down with authority at the rim. He ran down guys from behind and blocked shots. Turns out, he is more athletic than just about everyone thought. He can play (depending on opponent) short stretches at the 3 in a tall ball lineup as well.

All comparisons with Bonner end here. Red hair and long distance shooting? Yes. Everything else? No.

Popovich did a few things to and with Bertans that are often not advisable things to do to shooters, things that can shake confidence. Shooters thrive on consistency. Consistent minutes and consistent touches lead to the rhythm shooters need to consistently knock down shots. Bertans never knew when he’d play, or for how long. He was continually looking over his shoulder as Popovich tried anything and everything he could with lineups to compensate for Leonard’s absence.

When shooters are looking over their shoulder, they can’t relax. If they have a set spot in the rotation, that is another story. A relaxed shooter is a dangerous shooter. A very good shooter who has confidence and is relaxed and is consistently getting minutes? His game will elevate.

Bertans will get his minutes this year because the Spurs need what he brings to the table. If he plays to potential, the game will be easier for everyone. The 25 year old stretch four has the ability to spread the floor greatly and make it much easier for teammates to get off their shots.

And that’s why the Spurs decided to pay him.