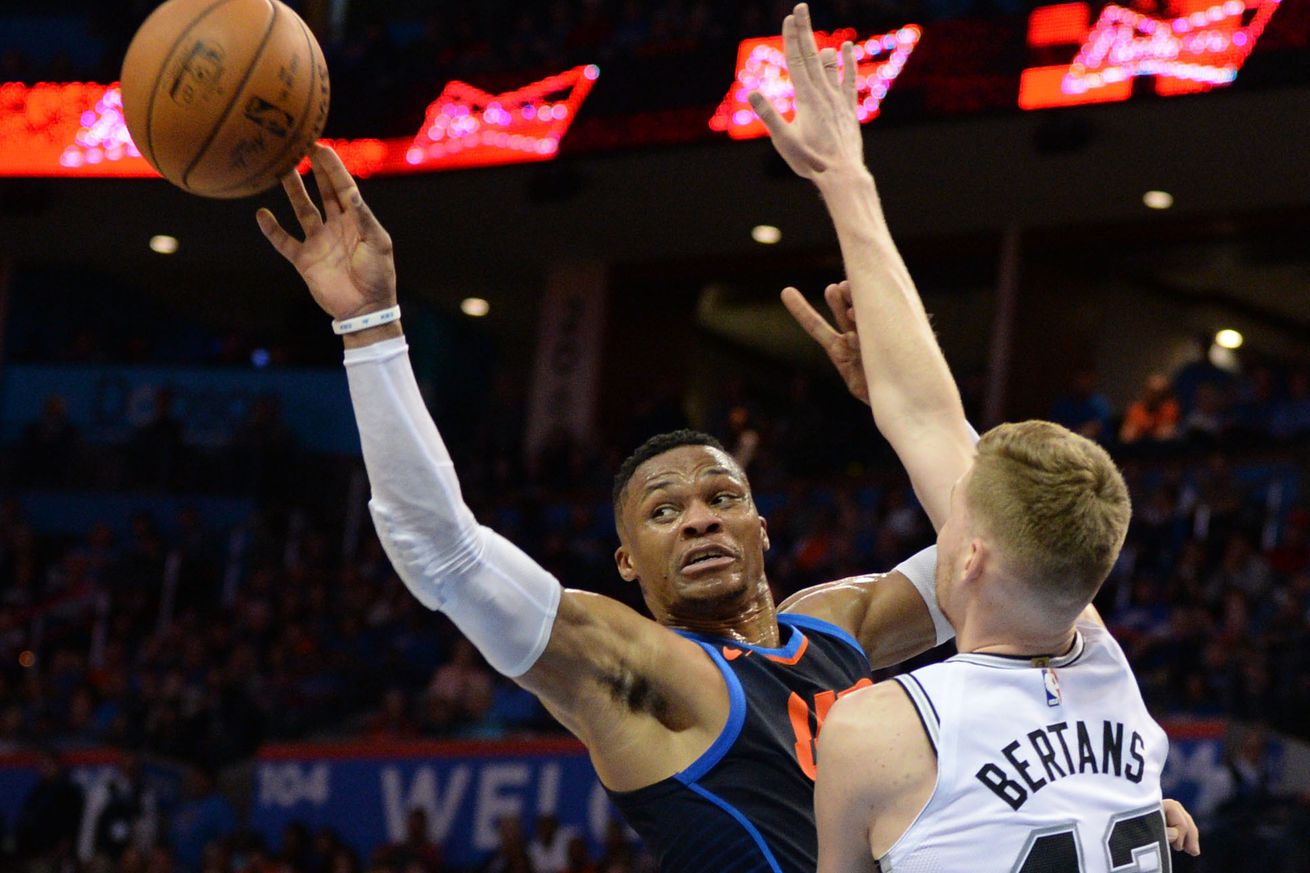 He’s still spending plenty of time on the sidelines, but the second-year pro is developing crucial skills to complement his shooting ability.

Following a short-handed, 39-point win over the Chicago Bulls last month, the Spurs had seemingly one more surprise in store for reporters, sending out second-year forward Davis Bertans to field the first round of player questions.

The unassuming Latvian, who’d scored 16 points in 19 minutes, seemed as astonished as anyone. And with good reason: in the first four weeks of the 2017-18 season, Bertans had averaged just 5.3 minutes of playing time while collecting four DNP-CDs, an odd turn for a guy who’d showed flashes of potential as a rookie.

Yet, the challenge from coach Gregg Popovich seemed clear: round out your game with the requisite skills of an NBA big or continue to ride the bench. The four may not be Bertans’ natural position in the NBA, but it’ll continue to be his role by default, as he’s too slight to anchor a defense and lacks the lateral quickness to hang with most small forwards. Offensively, he’s the perfect floor-stretcher, and a handful for basically any power forward due to his activity and quick release straight off the catch.

Easy to forget Davis Bertans is 6’10” when you watch him dart across the court, get his feet set in the corner while making the catch, and casually drill a three. pic.twitter.com/H34gZkkBC4

The problem is, many of his numbers hadn’t reflected those of a power forward. As a rookie, the 6’10’’ Bertans was a liability on the defensive glass (10.4% defensive rebound rate) and an inconsistent rim protector, more prone to fouling than altering a shot. Despite his offensive upside, those limitations were enough to temper expectations for what kind of an impact he could make in the NBA.

Bertans has been patient, and he’s continued to work on his game in the process. He was assigned to the Austin Spurs twice earlier this year, and has been spotted working with Coach Of Whatever He Wants: Tim Duncan during practice:

More from #Spurs practice… Bertans taking some lesson from Duncan and Monty… (Williams’ elbow on Tim looked like it hurt..lol) #Spurs pic.twitter.com/0nZDgA1V5F

Duncan, a master in the arcane arts of positioning and leveraging every ounce of his body weight, may already be rubbing off on Bertans. This season, the forward sports a much-improved 18.4% defensive rebound rate. It’s not elite, but it’s absolutely fine for a small-ball four. He’s been equally acceptable (0.85 points per possession) defending post-ups — and that’s exactly what the Spurs need: a guy who can help them tread water in his own end and light it up on the other. He was already a capable defender when switching onto ball-handlers, but his 2017-18 numbers in a small sample size have been terrific (allowing 0.25 PPP), and he’s currently in the 98th percentile as an iso defender.

How about this defense by Bertans on McCollum. pic.twitter.com/1PfinXw6DF

Lineups with Bertans are still worse on the glass collectively than those without, but there’s a lot going on there. Gregg Popovich is shuffling rotations to keep up with the team’s many injuries, and optimizing a fringe-rotation player’s skillset has, understandably, not been a top priority.

As with any specialist, Bertans’ deficiencies will need to be shored up by being inserted into the right lineups. One of the Spurs’ most interesting duos is Bertans paired with Dejounte Murray, who have a decent +22.2 net rating when sharing the floor. And it’s something Pop seems to have caught on to: 142 of Bertans’ 310 minutes have been alongside Murray, tied for second-most of any Bertans pairing. As with many net rating, there is a lot at play here, but it’s not all that shocking to see a super-long point guard with limited range complementing a big man who’s still honing his big-man skills.

Every reserve player has his own method of remaining engaged to battle against psychological inertia. Bertans is no different:

“Some nights it’s tough, not getting those minutes, to stay ready,” Bertans said after the win against the Bulls. “I try to come to every game assuming I’m going to play and prepare for every game the same. It’s a lot of work mentally. One thing is just being in the game no matter what, if I’m on the bench — trying to support the team like that.”

But even when he’s spending the majority of games on the sidelines, Bertans is improving, pushing out the margins of his game so that his core skills can shine the next time his number is called. That should bode well — both for San Antonio, and his long-term future as an NBA player.