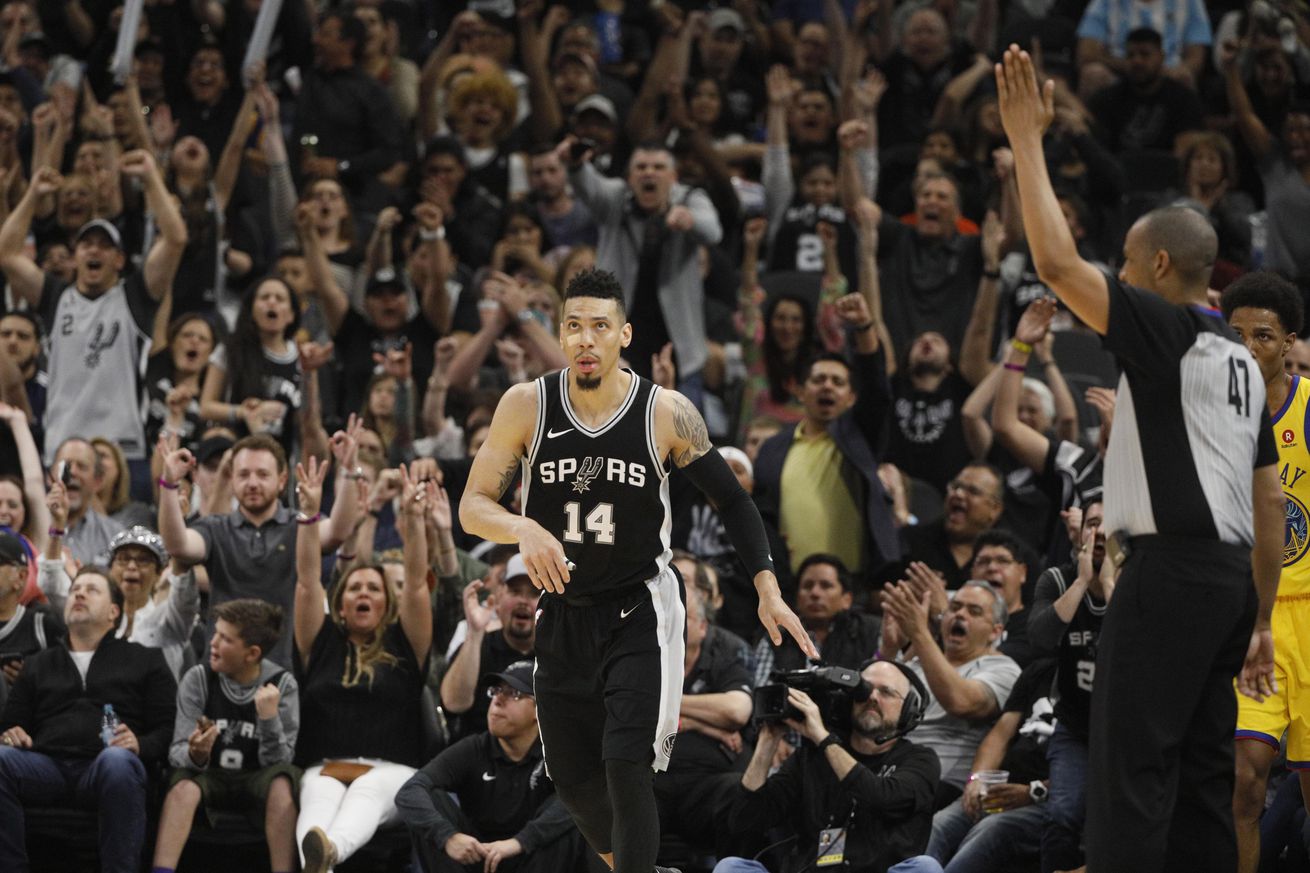 Green’s offensive decline could put the Spurs in a tough spot if he enters free agency.

Not long ago, Danny Green was one of the league’s elite 3-and-D wings. He combined with Kawhi Leonard to create a fearsome, versatile perimeter defensive duo while his dead eye three-point shooting nearly nabbed him a Finals MVP.

But over the past three years there has been a clear decline in Green’s impact on the offensive side. That, combined with a system change that demands more than just standstill shooting from wings, has sapped the value of one of the Spurs’ longest tenured players.

Green is still an above average defensive player, at worst. That makes him a rotation player in the league. The question now, as he could enter free agency, is whether he can be good enough on offense to remain a part of the Spurs’ core.

Green is not longer a plus on offense

The decline of Green’s impact on offense over the past three seasons cannot be denied. In his first four years as a rotation player, he was a definite plus despite never being a versatile piece. Green rarely crashed the offensive boards or set up his teammates with his passing. His drives were always wild and his pull-up from mid-range teased but never became consistent. What made him valuable was his elite three-point shooting. In that span, Green never shot under 40 percent from behind the arc despite firing, on average, close to seven threes a game. He didn’t just feast on corner threes, either. A big percentage of his outside looks came from above the break and the lowest he shot on those was 39 percent over that period.

Since then, his shooting has regressed enormously. In the past three years Green has shot a combined 36 percent from outside, just about the league average. He bottomed out in 2015/16 when he shot 33 percent before bouncing back the next year and shooting 38. Last season, that number dropped again, this time to 36 percent. The number of attempts per 100 possessions also dropped considerably. That wouldn’t have been a problem if he had developed other offensive skills, but he hasn‘t. His assists and offensive rebounding remain mediocre for a guard while his field goal percentage on two-pointers has steadily declined. Green is still not a reliable mid-range shooter. He’s a terrible inside finisher who failed to eclipse 51 percent on shots within five feet of the basket last season — a ghastly percentage.

Every composite advanced stat (be it Offensive Box Plus Minus, Offensive Real Plus Minus, Offensive Win Shares or Basketball-Reference’s Offensive Rating) suggest Green is at best close to neutral and more likely detrimental to the offense. Watching him play won’t do much to dispel that notion, as he either can’t get shots up or misses the ones he takes more than he should. Green is not involved enough or disastrous enough as a shooter to actually tank the offense on his own, but he doesn’t help it much anymore.

The system is not helping Green

The next question is whether the player got worse or the offense simply doesn’t fit him. It’s hard to move past the fact that Green’s struggles started with the revamping of the offense after the arrival of LaMarcus Aldrdige. After thriving on a perimeter-oriented, free-flowing pick and roll heavy system, adjusting to an inside-out, grind-it-out post one couldn’t have been easy. Green’s role seemingly remained the same — hit open shots your teammates set up for you — but the type of shots he’s getting are different.

Green shot a very good 44.8 percent on corner threes last season. The problem was that only 30 percent of his total looks came from there, the lowest percentage since he broke into the league. In his first four seasons with the Spurs, an average of 37.5 percent of his outside looks came from the pockets. In the past three, that number has dipped to 31.3 percent. It makes sense. A high pick and roll offense will result in open corner threes, as opponents send weakside defenders to tag roll men. A post oriented offense will require the strong side corner to be vacated completely and the pass to the weakside corner is extremely hard to make from the block. It’s telling that in the past three seasons combined, LaMarcus Aldridge has assisted Green on a grand total of nine corner threes. In 2014/15 alone, Tony Parker assisted him on 18.

No system can account for Green’s declining effectiveness from above the break. He‘s missed a lot of open looks he used to convert. That’s on him. Yet there has been a small change in his shot selection that has probably not helped. He’s taking more shots early in the shot clock lately. He seems to have a green light to pull up in transition, which is not inherently bad. But he often does it without rebounders in place, sometimes from straight away, the zone in which he struggles the most. There are times where he seems determined to take a shot as soon as he crosses halfcourt despite being guarded, resulting in some perplexing attempts.

It’s understandable for Green to try to get shots up when he can. He’s out there on offense almost exclusively to take and make threes. Especially when Leonard and Aldridge are off the court and open looks are harder to come by, it must be tempting to let shots fly. The results suggest patience would be a better option.

If he opts out, the Spurs face a tough decision

If Green opts in, the Spurs will be happy to have him back. On what would be a one-year deal at $10 million, he’d be a valuable player even if he doesn’t eclipse 40 percent from beyond the arc for a fourth straight year. His defense is still close to elite and while he never developed offensive versatility, his understanding of his role and the “corporate knowledge” he possesses could come in handy, especially if the team loses some of its veterans.

If Green opts out hoping to re-sign a long term deal, however, things get trickier. The Spurs seem committed to this system. Green clearly fits better on other type of offenses. Even the return of Kawhi Leonard won’t likely be enough to get him the looks he needs, since Kawhi is neither an elite passer nor a threat to penetrate that demands extra attention, as other isolation scorers like James Harden or LeBron James are. Those corner looks are likely not coming back.

Is Green worth, say, $36 million over three years if he’s going to be a 37 or 38 percent shooter? It’s something to ponder. The Spurs would have a hard time replacing him this offseason, but could find a cheaper, if lesser, short term alternative or a higher upside long term one. There’s no shortage of wings in this draft, for example.

Green has been an integral part of the Spurs team that returned to contention and won a championship just four years ago. In the Summertime era, he was one of the best role players in the league. Now, he’s just a good one.

The Spurs need to figure out what will it take to help him return to his former level, if it‘s at all possible, before making a new long term commitment to him. Losing Green would hurt enormously, but so could keeping him if he doesn’t fit the team’s plans.