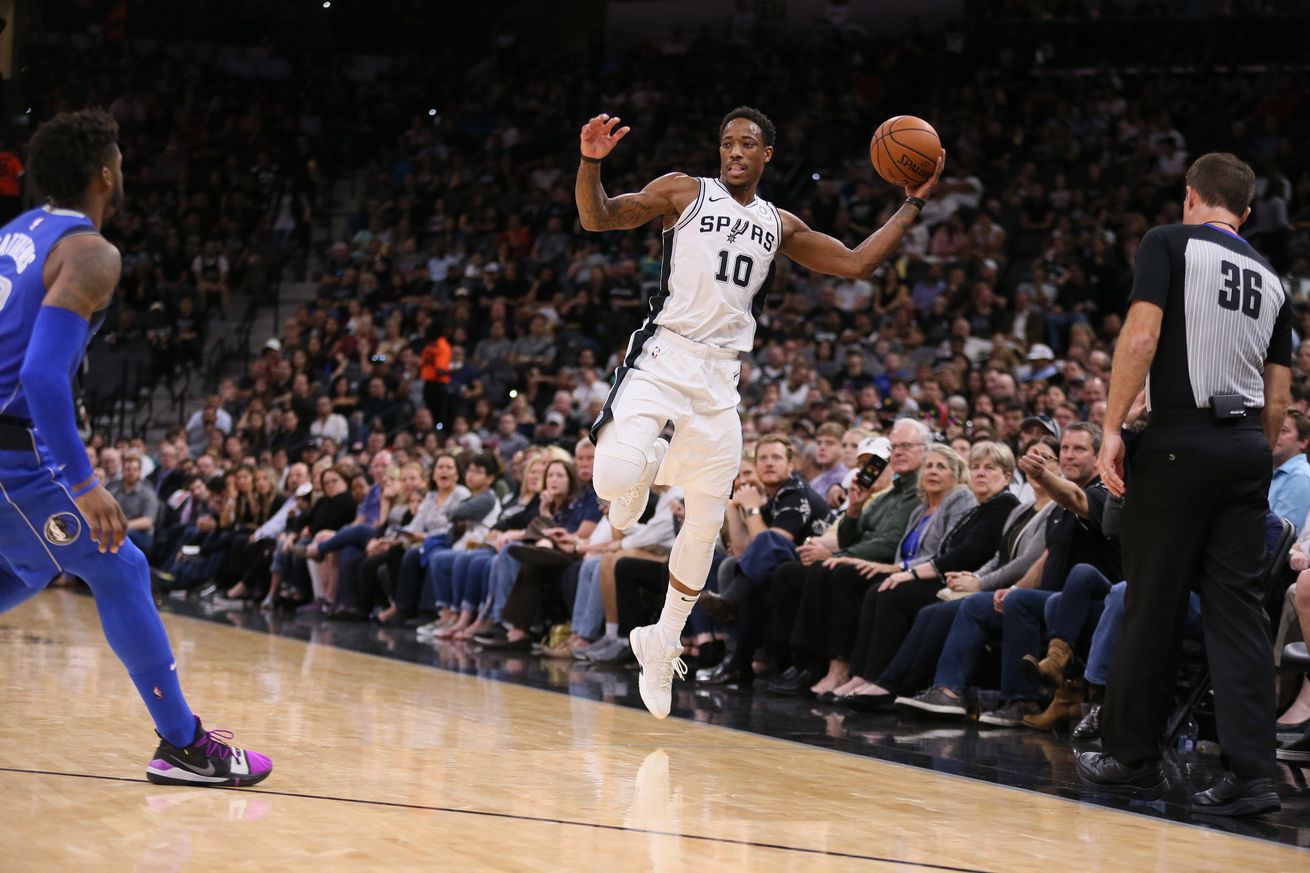 Familiar foes face each other with some unfamiliar faces on both teams.

Roundup: In another overtime thriller, the San Antonio Spurs eeked out a win over their interstate rival Dallas Mavericks. The game started slow, but the pace picked up to a furious finish with the good guys showing some composure and confidence down the stretch despite a sloppy game — the Mavs had 22 turnovers and the Spurs 17. DeMar DeRozan had another gem of a game with 34-9-6 and three steals.

Aimless Observations: The first quarter started at a stately pace by today’s NBA standards with both sides trading leads. DeRozan, getting very comfortable in his role as the leading scorer, led the way with combinations of mid-range jumpers and frequent trips to the free throw line. This game was also our first look at Luka Doncic, and he started slow out the gates with some visible frustrations on the offensive end. Seven Maverick TOs to 6 Spurs TOs closed the opening quarter with the Spurs leading 20-18.

Quarter two flowed along with several DeRozan pump fakes and more trips to the free throw line. The Spurs took advantage of a huge early FT disparity compared to their I-35 opponents and killed them softly from the line. The Mavs’ rookie was not very involved in the flow of their offense in the first half–much to Pop’s liking I’m sure as the pace remained steady. Halftime ended with an eight point lead for the Spurs. Dallas only took 11 three-pointers, which signaled good three-point defense by the Spurs.

In the second half, the Mavericks came out firing quick and cut the lead down to two, which forced Pop to call a timeout and end the sloppy start with a hockey-style line substitution. DeRozan was the only player Pop kept in, surrounding him with Pau Gasol, Patty Mills, Davis Bertans, and Marco Belinelli. The pace picked up as the Mavs continued to score and Doncic started to heat up with consecutive three pointers. But the Spurs came roaring back with the Foreign Legion (version 2018 led by Belinelli) to reclaim the lead late in the 3rd quarter. The Spurs ended the quarter on an 11-3 run to take a 2-point lead.

The Spurs spent the final quarter of regulation making numerous fouls as the two teams traded leads back and forth (10 total lead changes). The fourth quarter ended with Dennis Smith Jr. missing a crucial 2nd FT, and DeRozan’s missed shot with the clock winding down forced an extra period where San Antonio had a chance to redeem themselves in overtime.

Overtime saw the Spurs take a slow lead that they ultimately would not give up. DeRozan took charge with his scoring and basically allowed the Spurs to win tonight with some timely steals throughout the game. The Mavericks started overtime taking nothing but threes that thankfully did not fall for them while the Spurs survived another overtime contest.

The Spurs wrapped up a 3 game home stand in which they immediately trade in for a road trip Wednesday night at Phoenix against the Suns.