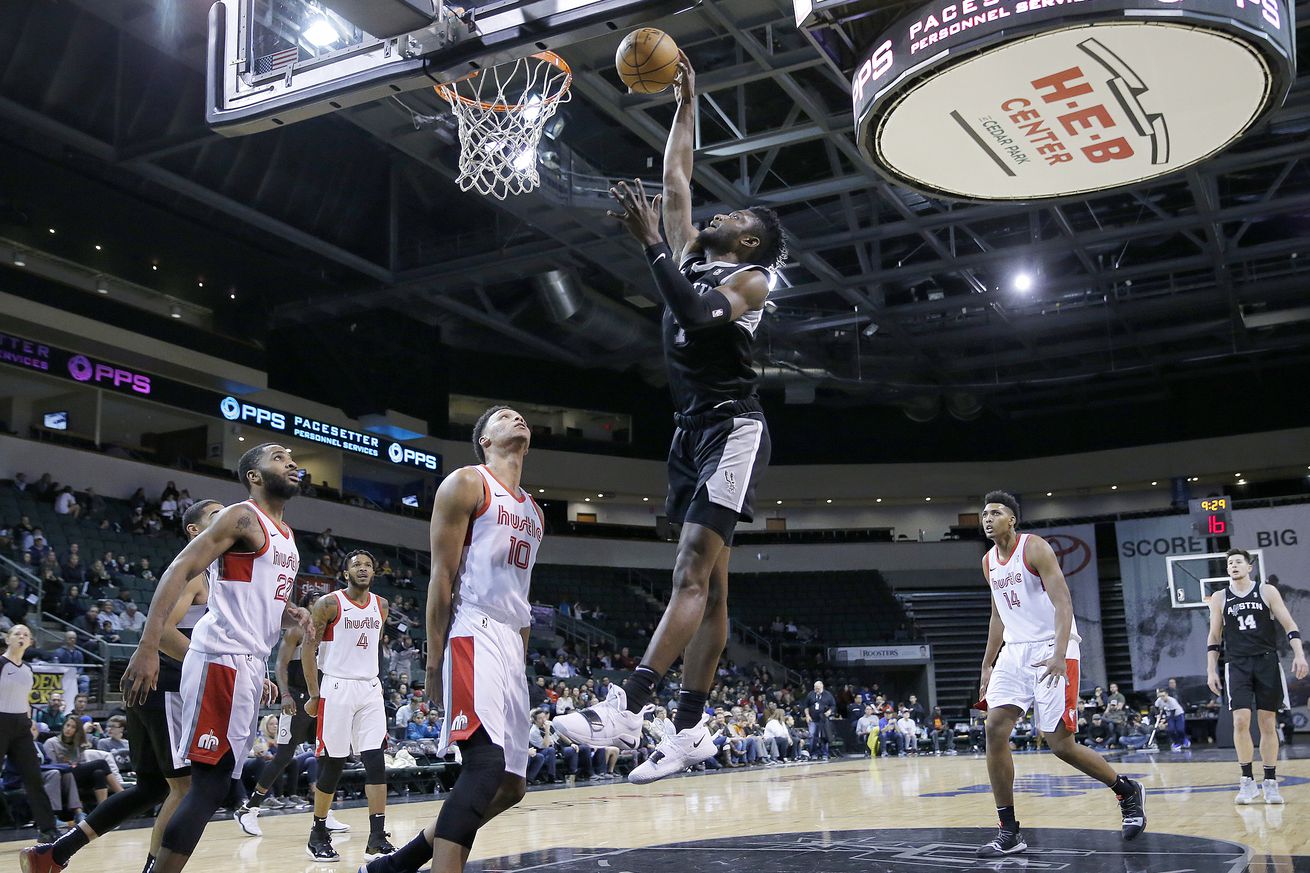 This season may very well be Metu’s only chance to show he belongs.

This series will look at each of the Spurs’ eleven under-30 players with an eye towards how they can improve in or expand their role on the team. Rather than focus on individual skills, for the most part, we’ll concentrate on what the team needs from each player on offense and defense to identify a key opportunity to have more impact.

For Chimezie Metu, the time is now. Thanks to the fallout from the Marcus Morris fiasco, he’ll have an opportunity this season to seize a role in the Spurs’ extended rotation. He may not be ready, but he also may not have any time to waste.

The problem for the second year forward out of USC is that the Spurs now have a couple of other young players on the roster who already appear better suited to do well much of what Chimezie has only shown the potential to develop.

In the wake of Morris’ change of heart, the Spurs signed 23-year-old Trey Lyles, the 12th pick in the 2015 draft. Just a year-and-a-half older than Chimezie, and essentially the same size, Trey already has 4 years of NBA experience, with all the attendant upside of a typical late lottery pick. He hasn’t been able to put it all together just yet, else he wouldn’t have been available so late in free agency nor for $5.5 million a year, but if Chip Engelland can help him recover the above average three-point accuracy he showed in 2017-18, he could easily take away the opportunities Chimezie might have gotten this season and next.

At that point, there’s a very real chance the Spurs’ first selection in this year’s draft, Luka Samanic, will be competing for starter minutes. Another 6’10” big with wing-like athleticism and ball-handling skills, Luka is almost 3 years younger than Chimezie but already has a more complete offensive game.

If Chimezie can’t break through this season, while Trey and Luka are still adapting to the Spurs’ system, he may barely get a chance next season. (Of note: the third year of his contract, worth $1.6, is only partially guaranteed.) That would be unfortunate, both for Chimezie and the Spurs, because he still has a ton of potential.

Defensively, he ought to be valuable for almost any team. His size and lateral agility alone should be enough to make him a good option for defending a wide range of offensive players, from large wings to most centers, and he has the balance, quickness and explosion necessary to track penetration and protect the rim. Unfortunately, those physical tools haven’t translated into game situations at this point. He just isn’t an engaged and disciplined defender on or off the ball.

His defensive potential should easily be the quickest path for him to get minutes considering that’s the one area where he should have a clear advantage over the Spurs’ other prospective young fours, but at this point, he’s still a liability on that end of the court.

He’s obviously only entering his 2nd season as a pro this year, so it’s possible he still has some dramatic improvement left. While it’s unlikely he’s going to turn into a plus defender in just one offseason, he’ll definitely have to put forth more effort and show better awareness on that end if he hopes to get minutes that matter under Gregg Popovich.

He’s shown much more progress on offense, but even then he still has gaping holes in his game. He has no outside shot to speak of, although he doesn’t hesitate to pull the trigger.

Chimezie took almost 60% of his shots in Austin between 4 feet and the three-point line and made around 39% of those attempts. On top of the poor shooting and poor decision making, he drifts towards the basket when he’s off the ball, ending up a step or two inside the three point line and compromising what little spacing he provides, often putting his defender directly into a potential driving or passing lane.

He also has a turnover problem. He nearly led both versions of the Spurs in turnovers per 100 possessions (and would have, too, if Donatas Motiejunas hadn’t swooped in at the last minute with 3 turnovers in just 28 possessions of regular season play). Chimezie turned the ball over on 18.6% of the possessions he used with both Austin and San Antonio, a number that would’ve placed him well within the bottom 10% of bigs in the NBA, per Cleaning the Glass.

But when he has the ball in his spots, he can look very impressive. He’s comfortable facing up at the elbow or on the block and can beat most defenders off the dribble. He’s too quick for most bigs and too strong for most wings, at least in the G League. He has solid footwork from either side, although his ability to finish when he can’t get to the rim is still a work in progress.

Chimezie isn’t a great screener, but that’s common with young bigs. Switching back and forth between Austin and San Antonio didn’t help much in that respect, as the lack of continuity surely hampered his ability to develop any kind of chemistry with the guards on either squad.

Once the ball handler is over the screen, though, Chimezie has a good feel for moving in space, and his hands aren’t bad. He really should be a dangerous roll man, able to consistently win the race to the rim and get higher, quicker than any defender, much like Clint Capela. But once again, his physical tools haven’t had the expected effect in game situations. In this instance, though, there’s good reason to expect he’ll get better with time and reps, as most young bigs do.

Improving as a screener and at reading the roll should have an even more pronounced impact on the offense in Chimezie’s case because he’s already shown sharp passing instincts. He’s very good at distributing out of the post and on the roll. He can catch on the move, read the floor and deliver a timely and accurate pass to open shooters before he even takes a dribble, a skill many bigs never develop.

Those passing chops combined with his ability to take defenders off the dribble make it easy to understand what the Spurs saw in Chimezie last summer. If his shot comes along at all and he discovers another gear on defense, three years’ worth of guaranteed money will start to make sense. It’s possible, of course, that he’s already put in the work this summer and is ready to show off some new or improved part of his game.

If he hadn’t been injured, we may even have seen a glimpse of it in Summer League. Chimezie, but with quicker and more decisive help defense, for one, sounds like an enticing package. If you just watch his highlights, it’s pretty convincing. He’s a strong, physical driver, and he’s light on his feet with the ability to exploit his defender’s mistakes. On the other end, he can get sky high for highlight reel blocks and will take a steal coast to coast for a thunderous dunk every now and again, both done with an ease that would make them feel perfunctory if he wasn’t such an impressive athlete.

As things currently stand, that version of Chimezie is just a what-if scenario. The Spurs appear much more likely to have burned a roster spot than to have found another diamond in the rough.

When you dig beneath the surface of those highlights, it becomes painfully clear that he’s not a good defender, he can’t shoot, and he turns the ball over far too often. In that respect, he’s something like the inverse of Davis Bertans. Replace the dead eye shooting with an elbow and post up game, switch out one of the lowest turnover rates on the team for one of the highest, add a little shot blocking and take away some overall defensive utility, and you’ve got Chimezie. A better comparison might be Drew Eubanks, who lacks Chimezie’s potential to attack from the perimeter, but has a softer touch at every level, provides better interior defense, and excels within his more limited role.

Perhaps it’s unfair to judge Chimezie on his rookie performance. New Spurs often show significant improvement in their sophomore season, and there’s certainly a chance he would’ve provided a glimpse of something different in Summer League if he could’ve played.

Even if he did, would the next step in Chimezie’s development provide the Spurs with something they don’t already have in their reclamation project or their Croatian prospect? The answer, at least at this point, appears very likely to be no.

Chimezie Metu is a project whose time may never come with the Spurs
Source: Pounding The Rock