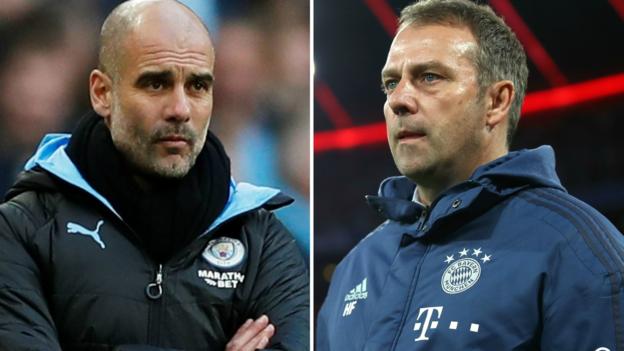 Who are the clubs well-placed to progress as crunch time arrives in the Champions League last 16? And who has it all to do?

Three of England’s four clubs head into the second leg with a deficit to turn around – with only Manchester City enjoying a lead.

To assess the percentage chance of each side reaching the quarter-finals, sports data analysts Gracenote have used their Euro Club Index. – feeding the results to us at BBC Sport.

Who are favourites to win it?

Last year’s Champions League winners Liverpool might be running away with the league, but their 1-0 loss at Atletico Madrid two weeks ago them leaves perilously close to going out.

“As Liverpool have a tough task on their hands to reach this season’s Champions League quarter-finals, Bayern Munich, Manchester City and Barcelona are the three big favourites to reach the final,” says Simon Gleave, head of sports analysis at Gracenote.

“Should Liverpool knock out Atletico, the Reds will again be one of the big favourites to reach the final and win the tournament as they are the Euro Club Index’s number one ranked team.”

But if you think it looks tough for Liverpool, then spare a thought for Chelsea, whose 3-0 first-leg loss to Bayern Munich gives them a 0.3% chance of winning the competition.

How has this score played out previously? Teams winning 1-0 away in the first leg have gone to progress 18 times and been eliminated three times.

European football journalist Raphael Honigstein: “That [first] Spurs game was almost a watershed moment for Leipzig because people weren’t sure if they could deal with the occasion. They had never been in the Champions League knockout stages before – [manager] Julian Nagelsmann had never been there. But they were so sure, they were balanced. Everything points towards Leipzig.”

Former Tottenham and Sevilla striker Freddie Kanoute: “Jose Mourinho has been a top manager and his record speaks for itself but the past few games from Tottenham have lacked passion. You saw Tottenham lose to Norwich [in the FA Cup] and it was like they were waiting for something to happen. Most of the time it is too late. I am not a big fan of the way their game plan goes right now.”

Any hope for Spurs? Lightning couldn’t strike twice, could it? Tottenham lost 1-0 at home to Ajax in the first leg of last year’s semi-final and conceded another two goals in the first half of the second leg before launching one of the competition’s great comebacks – winning 3-2 on the night and going through on the away goals rule. But the fact that the feat has only been managed two other times in 21 attempts suggests history is not on their side.

How has this score played out previously? Teams winning 4-1 at home in the first leg have progressed three times and been eliminated twice.

Any hope for Valencia? Remember Kostas Manolas? Barcelona still have nightmares about him. The Greek centre-back, then with Roma, completed one of the remarkable Champions League comebacks with a decisive header as the Italians, 4-1 down from their quarter-final first leg, won 3-0 in Rome to go through on the away goals rule. That was the second time in Champions League history that a team had gone through after losing the first leg 4-1 – Deportivo La Coruna did it in a 2003-04 quarter-final against AC Milan, winning the second leg 4-0.

How has this score played out previously? Teams winning 1-0 at home in the first leg have progressed 23 times and been eliminated 10 times.

European football journalist Kristof Terreur: “Atletico had a strong game plan when they beat Liverpool but they haven’t been that good. We saw the real Atletico against Liverpool – but don’t underestimate Liverpool at home. Usually they can go the extra mile.”

Spanish football journalist Guillem Balague: “Liverpool have struggled to break teams down. It needs to be a low-scoring game for Atletico to go through. Their hope again is to score early, but if it is about defending they are happy to do it, not scared at all.”

Any hope for Liverpool? Liverpool don’t need to look too far back for inspiration. The feat of overturning a 3-0 first-leg deficit against Barcelona in last season’s semi-final will be fresh in their minds.

How has this score played out previously? Teams winning 2-1 at home in the first leg have progressed 11 times and been eliminated 14 times.

Any hope for Paris St-Germain? PSG have suffered some particularly cruel blows at the last-16 stage. In 2017, they blew a 4-0 first-leg lead against Barcelona by losing 6-1 at the Nou Camp. Last season, having won 2-0 at Old Trafford, they conceded a late penalty to lose 3-1 at home to Manchester United and go out on away goals. Maybe having to come from behind, rather than hold on to an advantage, will suit them better? Porto were the last team to come back from a 2-1 away defeat in the first leg, winning 3-1 at home to Roma after extra time in last season’s last 16.

How has this score played out previously? Teams winning 1-0 at home in the first leg have progressed 23 times and been eliminated 10 times.

Any hope for Juventus? Lyon’s last foray into the last 16 did not go well a year ago. They held Barcelona 0-0 at home in the first leg but then suffered a humbling 5-1 defeat at the Nou Camp.

How has this score played out previously? Teams winning 2-1 away in the first leg have progressed eight times and been eliminated once.

Any hope for Real Madrid? Zinedine Zidane’s side will need to draw on their shock last-16 exit at Ajax’s hands last season. Real won 2-1 in Amsterdam – then got thumped 4-1 at the Bernabeu.

How has this score played out previously? Teams drawing 1-1 at home in the first leg – as Napoli did – have progressed 12 times and been eliminated 24 times.

Who has the advantage? The fact that Napoli have gone out in both of their previous appearances at this stage does not bode well. Barcelona also drew their last-16 first leg last season – 0-0 with Lyon – before winning the return 5-1.

How has this score played out previously? Teams winning 3-0 away in the first leg have progressed five times and have never been eliminated.

Any hope for Chelsea? If we go by history alone, no. No team has overturned a 3-0 deficit when travelling away for the second leg. Saying that, Tottenham were 3-0 down on aggregate with 35 minutes to play in Amsterdam last season, so miracles do happen.