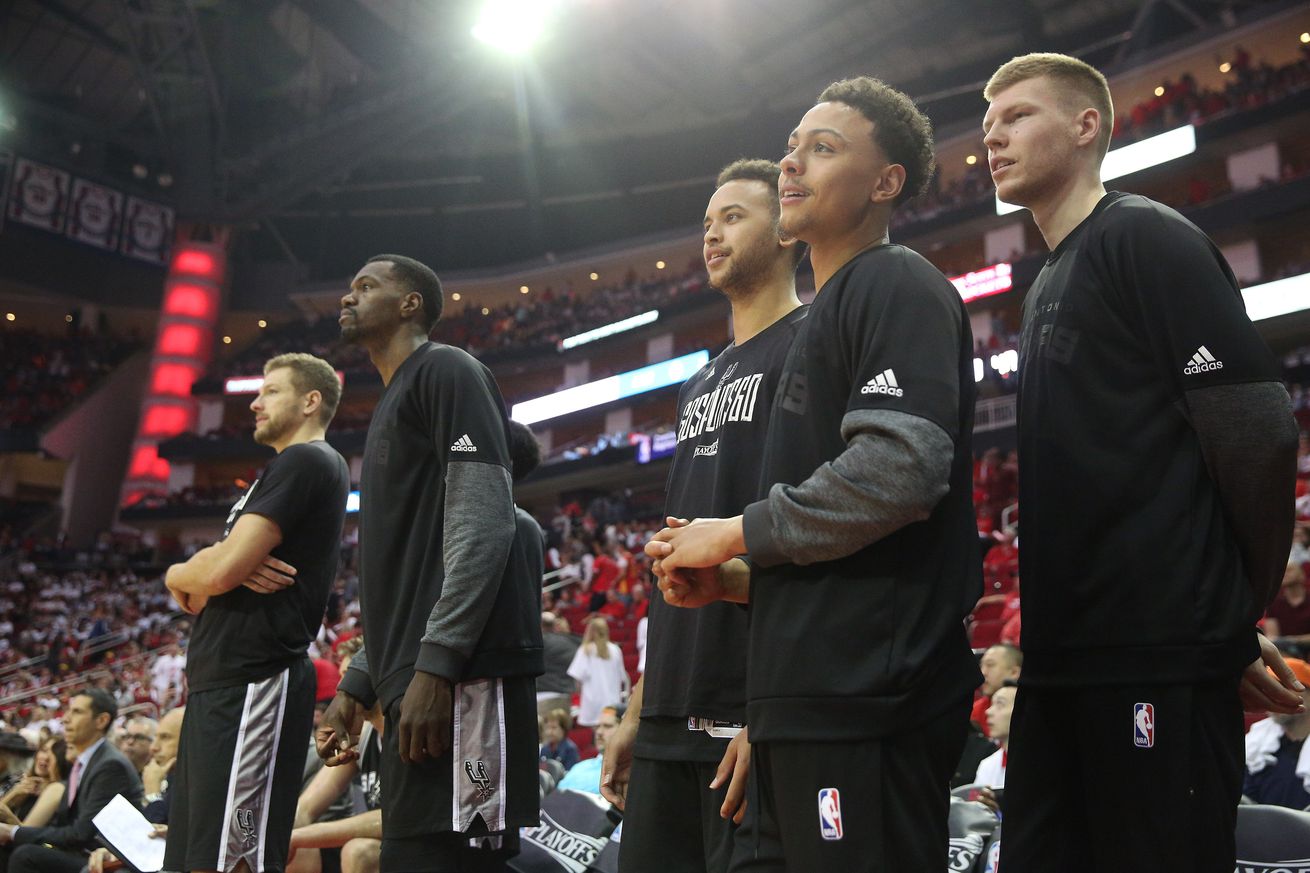 The 2016-17 Spurs were one of the few teams to buck the small-ball trend. That should change next year.

While the league continued its march towards greater pace, space and lineup versatility, last year’s Spurs were an evolutionary atavism, the NBA’s ornery champions of the long two. They leaned on one of the deeper (and more effective) big-man rotations, ranked 27th in pace and took the 25th-most three-point attempts.

That all made sense given their personnel and the system they were moving on from, but circumstances have changed. This summer’s roster moves make a shift to small ball almost inevitable, with the team suddently short on bigs and stocked with positionless, multi-skilled players who could be sharing the floor more than ever.

There are 96 total minutes between the power-forward and center positions every game. Last year, LaMarcus Aldridge averaged 32.4 minutes, and Pau Gasol averaged 25.4. It’s doubtful Aldridge’s numbers go up as he recently turned 32, while 37-year-old Gasol has at least two more years in San Antonio and will be coming off of Euro 2018 play, giving Pop all the more reason to manage his playing time. Penciling them in for 57 combined minutes seems generous for the purposes of this exercise.

Dewayne Dedmon and David Lee are both gone (although Lee still hasn’t signed anywhere), and Joffrey Lauvergne, the last big on the roster, has never even averaged 18 minutes per game. If you project him at that (again, generous), that leaves roughly 21 big-man minutes left on nights when all three suit up. Now, you could overlap those three so that the Spurs always have two traditional big men on the floor, but that would still mean 11 minutes per game where they would be rolling out someone like Kyle Anderson or Davis Bertans at center, which would seem less than ideal.

It’s likelier that Pop staggers those three out, which could mean pushing small-ball time close to that 21-minute total on many nights, with multiple wings on the floor and Bertans, Anderson, Kawhi Leonard and new Spur Rudy Gay all getting reps at the four.

We saw a little of this last year

The key word here is ‘little’ and most of it involved the Latvian rookie. Almost all of Bertans’ minutes last season were as a small-ball four, whether that was because Pop valued his ability to pull power forwards away from the basket or was reluctant to have him guard threes on the perimeter. The results were largely mixed.

Offensively, Bertans looked far more comfortable than your average rookie, showing off range that extends comfortably to the BIG3 four-point spots. He fit in well with many of the bench lineups thanks to both the spacing he provided and his high basketball IQ, and good things tended to happen whether he was firing away or simply making the right play:

That time we passed the ball around the world…

Defensively, though, he had trouble contesting shots without fouling, and he gave up twenty or thirty pounds to traditional bigs who regularly knocked around his Vincent Adultman-like frame. He posted the same rebound rate (6.9%) as 39-year-old Manu Ginobili and the team’s overall rebound rate dropped from 51.7% to 50.3% when he was on the floor.

Bertans may or may not end up an effective small-ball four, but where I like the idea of him the most is in positionless, three-wing lineups, where his strengths shine and his weaknesses are shored up by guys like Leonard and Anderson.

This opens things up for some intriguing lineups that would play into San Antonio’s already-free-flowing style, and Pop may dedicate a large chunk of the season figuring out what combinations work best. Play Leonard and Gay together and you’ve got two big wings that can post up the smaller man anytime they like, or attack the rim off the dribble. Leonard is emerging as a playmaker and Gay, as highlighted in this excellent BBallBreakdown piece, is probably underrated as a passer:

Complement them with. say, Dejounte Murray and Danny Green, and you’ve got length for days that can switch defensively and wreak plenty of havoc in passing lanes. In case you’ve forgotten how crazy-long Murray is:

Gasol has already extended his game beyond the arc, leading the entire league in three-point percentage last season. Aldridge has that range, as well, shooting 41.1% last year on 56 attempts. If he trends away from his low-efficiency fadeaways and towards more threes, the Spurs’ offense could look as modern as any team’s.

There will be new challenges

It’s known that Aldridge has (or at least had) an aversion to playing the five. But even if you get past that (the position has, after all, evolved from the days where every center was a banger that had to get X low-post touches per game), there are other obstacles the Spurs will face.

All lineups, big and small, may suffer from a lack of off-the-dribble creation with Tony Parker sidelined and swing man Jonathon Simmons in Orlando. The Spurs offense relies foremost on ball movement, but the ability to get past defenders or create when chased off the three-point line is also important to keep defenses honest.

Rebounding is another area of concern. The 2016-17 Spurs were the league’s 6th best rebounding team in both overall and defensive rebound rate, a strength which no doubt contributed to their league-best defensive rating. Dedmon was the most proficient rebounder of the group, pulling down 21.1% of all available rebounds, and Lee (16.9%) was third. New Spur Lauvergne (14.9% over his three-year career) won’t likely be a force on the boards, and could be a liability in units he’s anchoring.

As mentioned with Bertans, the Spurs have options to shore this up. Anderson, Leonard and Gay are all strong rebounders, and Murray projects to be one as well for his position.

Gay is the X factor here

The more I read about Achilles injuries, the less optimistic I am about the former King’s chances to be the kind of player many hope he can be in San Antonio. And being on the wrong side of 30 certainly doesn’t help. But the Spurs likely wouldn’t have signed him if they believed he couldn’t make an impact. He may end up minus a step, but given his transition to playing more minutes at the four, that may not be that big a concern anyway.

If health is on Gay’s side, he fixes a lot of issues the small-ball lineups and the roster in general have. He’s not only a solid rebounder, with experience playing power forward from his time in Sacramento, but he’d also be one of the better shot creators on the team. He’s a good spot-up shooter and probably undervalued as a defender (he ranked 8th among small forwards in defensive real plus-minus last year).

PATFO may have gone after Gay regardless of their wider roster plans — he is, in a vacuum, a relatively low-risk signing with high upside. But he also makes a lot of sense both on this roster and on a team that could be moving towards more dynamic, smaller lineups.