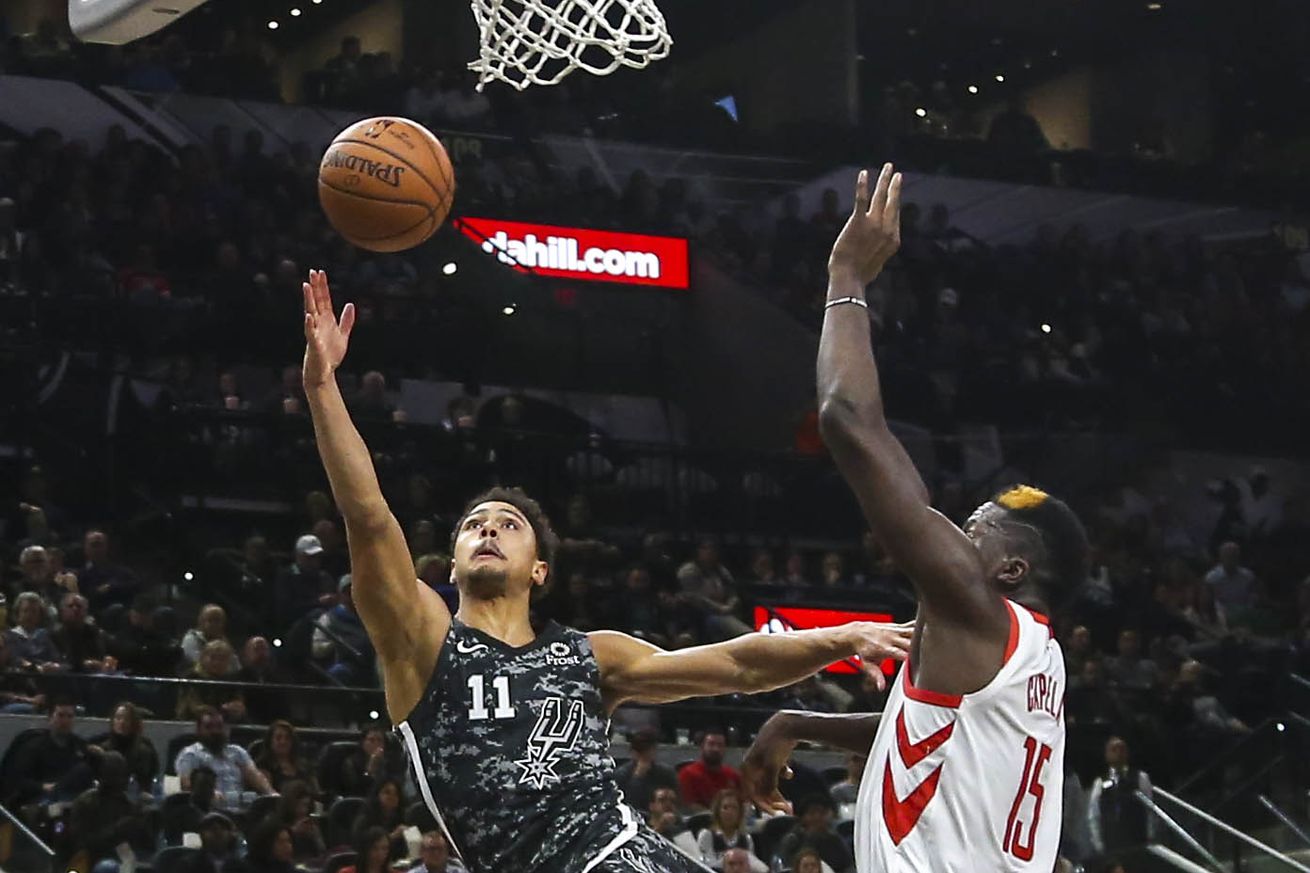 The undrafted third-year guard has thrived as an unlikely starter trying to help this Spurs team stay afloat.

Beginning with Dejounte Murray in 2016, Derrick White in 2017, and Lonnie Walker IV this past summer, the Spurs have selected guards in the first round of the past three drafts, presumably laying the foundation for the backcourt of the future that we might have been able to preview as early as, well, now.

Like many things in San Antonio lately, that hasn’t gone according to plan — Murray was lost indefinitely to an ACL injury in preseason, Walker to a knee injury he’s still rehabbing from, and White, after dealing with his own leg issues, is still finding his comfort level within the San Antonio rotation. Thus, it’s not exactly by design that one of the few fixtures of the Spurs’ starting lineup has been undrafted and undersized third-year combo guard Bryn Forbes, a player whose contract last season wasn’t guaranteed until January 15th and whose role at a loaded position was unclear heading into this season.

And yet, the 25-year-old is excelling, providing the team with welcome stability and floor-spacing while averaging a career-high 13.9 points per game. He’s one of three Spurs to start all 16 games, alongside All-NBAers DeMar DeRozan and LaMarcus Aldridge, and it doesn’t look like he’ll relinquish that spot anytime soon, especially after dropping a season-high 20 on 7-of-8 shooting on Monday. Of all NBA players taking more than 5 three-point attempts per game, only Steph Curry is shooting a better percentage than Forbes’ 47%. He’s also been remarkably consistent, keeping his turnovers low, scoring in double figures in 14 of his 16 games (he had 7 in the other two), and sustaining a high motor at both ends of the floor.

While it says something about the state of the team that Forbes is currently third in total points scored (209) and minutes played (462), it says more about him as he attempts to be the next Spurs success story. For every Jonathon Simmons there’s five Brandon Pauls, and the difference lies in the opportunities that present themselves and the work that player puts in.

When viewed in that light, one can’t help but appreciate the focused rigidity Forbes brings whenever he’s on the floor. He’s basically a basketball G.I. Joe, his face locked in a perpetually intense expression and his shoulders always squared and ready to shoot, whether stationary or on the move. He’s been doing both way more this year:

“He has a green light for sure,” Gregg Popovich affirmed last month. That freedom is obvious not only in Forbes’ shot volume but in the kinds of looks he’s now seeking out within the offense.

Last year, Forbes’ remit was simple: catch the ball above the break and briefly contemplate shooting the three; if it wasn’t there, he’d take two quick dribbles to the elbow and either pull up for the open jumper or reset the possession. Fin. He still plays at the same metronomic rhythm he did last year, but he’s becoming less predictable — which is helpful as teams actually start game-planning for him. He’s doing more to help initiate the offense through the pick and roll, as well as attacking the rim rather than picking up his dribble at the foul line. He’s currently taking 21.2% of his shots at the basket, up from 16.7% last year, and is showing greater confidence in finishing against rim protectors.

Those drives have naturally included one of Forbes’ pet plays: the wrong-footed finish. He’s not quite on the level of teammate Patty Mills, who has an arsenal of nifty moves around the rim, but his tendency to push off the right foot on right-handed layups is something that goes back through last season and to his college days.

Dunno if I’ve ever seen anyone favor finishing off the same foot he takes off from as much as Forbes.

He gets the and-one here over Ben Simmons. pic.twitter.com/ZsXvMERkbn

This year, the motion looks more fluid, and we’ve seen it function more to his advantage against formidable defenders.

almost certainly the best one yet pic.twitter.com/TnuKo7CPPr

In a literal and figurative sense, Forbes’ third NBA season is starting off on the right foot. His production has been crucial for a Spurs team that’s still finding itself, but it’s even bigger for him as he looks to make a name for himself in the league. “He’s come a long way,” said Pop. “I’m really happy for him; he’s carving out a career.”