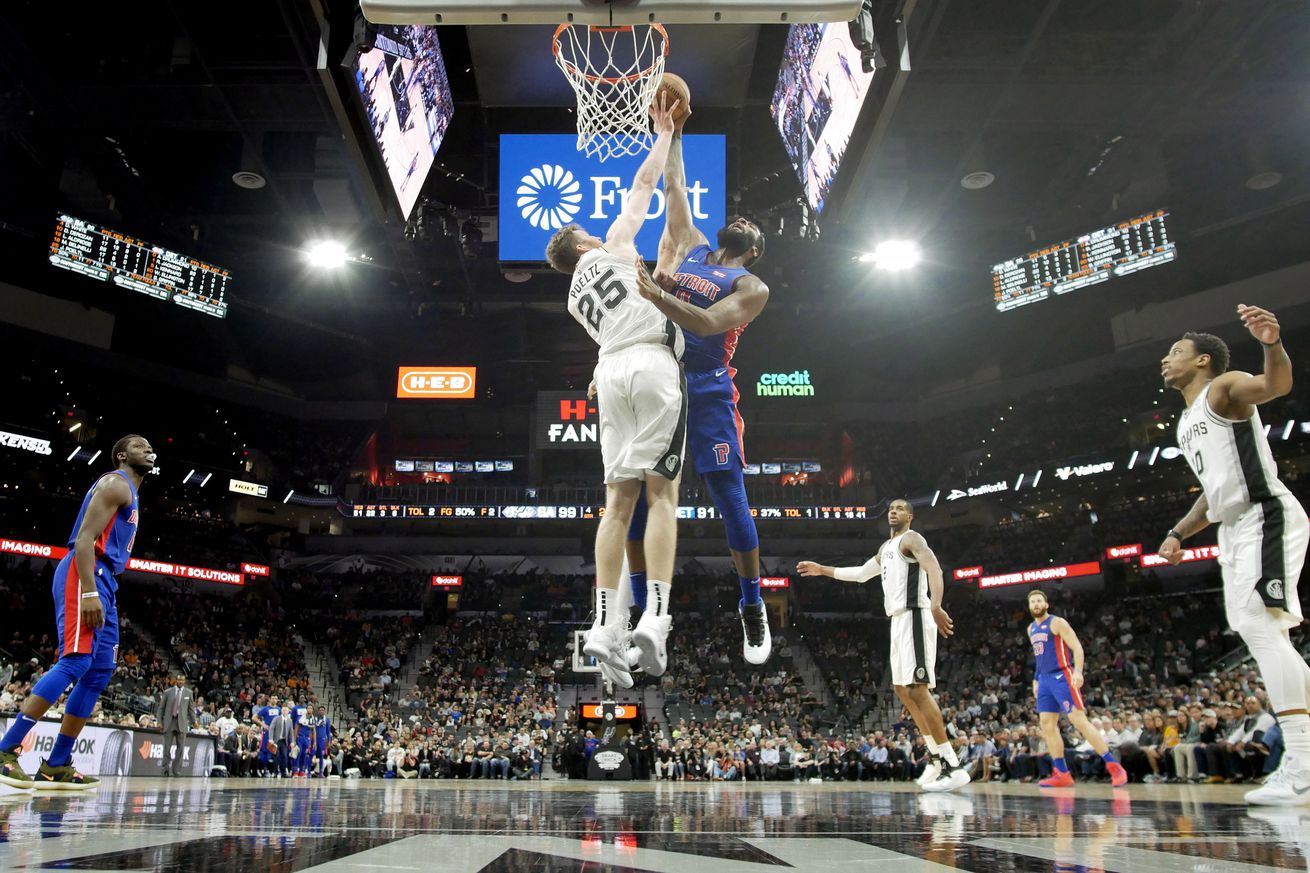 Taking a look at improvements all young Spurs can make.

After arriving in San Antonio as little more than an apparent throw-in on the franchise altering trade that brought DeMar DeRozan to town, Jakob Poeltl began the season as the Spurs’ 3rd big behind LaMarcus Aldridge and Pau Gasol. Fortunately for Jakob (and the team), Pau was forced to sit out by an injured foot for 2 months from early November until early January, giving the young Austrian a chance to grow into a bigger role.

Apparently, that was all he needed. By the end of January, Jakob’s play had made Pau clearly expendable, leading to his eventual buy out. That Jakob proved to be a dependable big capable of cracking the rotation so quickly was a pleasant surprise, as was his ability to supplant an established veteran on a team that values continuity as much as any in the league.

But Jakob went even further, seizing a starting job by shoring up the team’s defense in a twin towers alignment alongside LaMarcus. With Derrick White, Bryn Forbes, and DeMar DeRozan filling out the rest of the starting five, the Spurs gave up just 104.3 points per 100 possessions, a full 7 points per 100 lower than the team’s season average, despite playing the bulk of their minutes against their opponents’ best players.

Unfortunately, they were even better at keeping themselves from scoring, managing a paltry 99.5 points per 100, resulting in an ugly net rating of -4.8 over 375 regular season possessions. Their struggles were nothing if not predictable, as a lack of outside shooting led to spacing issues that exacerbated their already sub-optimal shot profile and low free throw rate while the two big lineup failed to compensate with improved offensive rebounding.

For the first 6 games of their first round match up against the Nuggets, that lineup appeared to find its footing, outscoring the Nuggets by 17 points over 71 minutes of play. But that changed in Game 7 as the Nuggets exposed those spacing issues with aggressive help, leaving the Spurs’ offense gasping for air.

If Jakob is going to maintain his starting role, he and the Spurs will have to find ways to manufacture a little more breathing room. There are a lot of ways to do that, but for a big man like Jakob, becoming an off-ball threat is a little more complicated than it would be for a guard or wing.

He doesn’t have much range and isn’t likely to develop enough to significantly impact the game with his shooting. According to Cleaning the Glass, he’s only taken 9 shots outside 14 feet in his career, and his free throw accuracy is troubling at best. Jakob’s 53.3% was the 5th worst in the league among players who appeared in at least 70% of their team’s games. He should be able to improve — he appears to have decent touch — but there’s a long road between being a 50% free throw shooter and knocking down catch and shoot jumpers.

He’s not much of a ball handler either, so he’s not going to be doing a whole lot more than taking 1 dribble on his way to the rim. As the lone big in a spread pick and roll offense, as he was with the second unit for much of this season, that’s all he really needs to do. But if the Spurs are going to try to keep him in the starting lineup, they’re going to need more than that.

One of the main reasons teams can help so aggressively off Jakob at this point is he only has about 4 tools in his bag when he gets the ball out on the floor. If he has a lane to the rim, especially when he catches on the move, he excels at using his two steps to get to the basket and has great touch once he gets there.

He made 70% of his attempts at the rim this year. That’s not quite an elite mark for a big, but it’s very, very good.

When he’s in the middle of the floor, he’s also able to read weak side help and consistently hits the open shooter in the corner.

When his path to the rim is cut off and that passing lane isn’t open, Jakob has an okay half-floater/half one-handed set shot out to about 8 feet, although he rarely uses it.

He made 47% of his shots in the short midrange this season, mostly because he only takes these shots when they’re wide open. Otherwise, he immediately passes out or dribbles into a hand off.

Jakob rarely hangs onto the ball very long. With such a short decision tree, that makes sense, but it’s an important part of his role in the offense. The Spurs, however, need him to be able to do more with the ball without holding it any longer.

That means reading more of the floor and making more aggressive passes.

Jakob sees that LaMarcus has a seal on Jamal Murray and considers the pass, but he has to make it immediately to give LaMarcus a chance to do something with the ball before Nikola Jokic recovers. Once he decides not to make that pass, he makes one read, seeing that Murray is on LMA’s back, and sends it cross court out to DeMar in the left corner.

That’s not a bad play, and it worked out in this case as DeMar drew a switch driving through the lane then tossed an alley oop right to the rim for LaMarcus. But it shouldn’t have required DeMar to make a great play; LaMarcus should’ve had a layup right away. Once that opportunity was lost, Jakob should’ve hit Derrick White cutting in from the left wing.

The wing appears to be a bit of blind spot for Jakob, because he’s missed that read pretty often.

While it’s fair to say Jakob can’t see Bryn Forbes on the left wing here, he absolutely knows Dennis Schroder is helping way too far off him. Instead of getting Bryn a look from three or the chance to attack a closeout, LaMarcus catches it with Steven Adams in good position.

Aside from reading the floor and hitting the open man, Jakob also needs to learn to manipulate defenders to generate open looks.

When Jakob receives the ball, he’s got Murray stunting in off Derrick and Paul Millsap inside the restricted area. Jakob chooses to kick the ball back out to his right rather than challenge the defense, and Derrick makes that work by driving into the lane before hitting Bryn on the left wing for a three.

But again, this play should’ve been simple. From here, Jakob needs to make Millsap choose between him and LaMarcus. Trapped inside the restricted area, it’s unlikely Millsap could do much to challenge Jakob’s shot without fouling, but even if he could, Jakob needs to be able drop it off with either a bounce pass or a lob over the top.

Once Jakob is capable of taking advantage of these situations, the Spurs offense will have a much better flow when both he and LaMarcus are on the court. Specifically, if he can punish teams for helping off him to contain the Spurs’ ball handlers, it will make the game much easier for the entire team.

Whether Jakob can learn to exploit those 4-on-3 opportunities by becoming a weapon on the short roll will go a long way towards determining the team’s offensive ceiling with their preferred twin tower arrangement.

There are plenty of other things for Jakob to work on as well. His free throw shooting is a good place to start, but he could also afford to spend some time in the weight room. Though he did an admirable job defending the Nuggets’ All-Star center, the Joker’s 20+ pound advantage proved to be too much at times.

On the whole, Jakob had a remarkable first season in the silver and black. He’s only 23 years old with plenty of room to improve. Now, as he heads into the offseason with a team known for its player development, he has a chance to cement himself as a key part of the Spurs’ future plans.