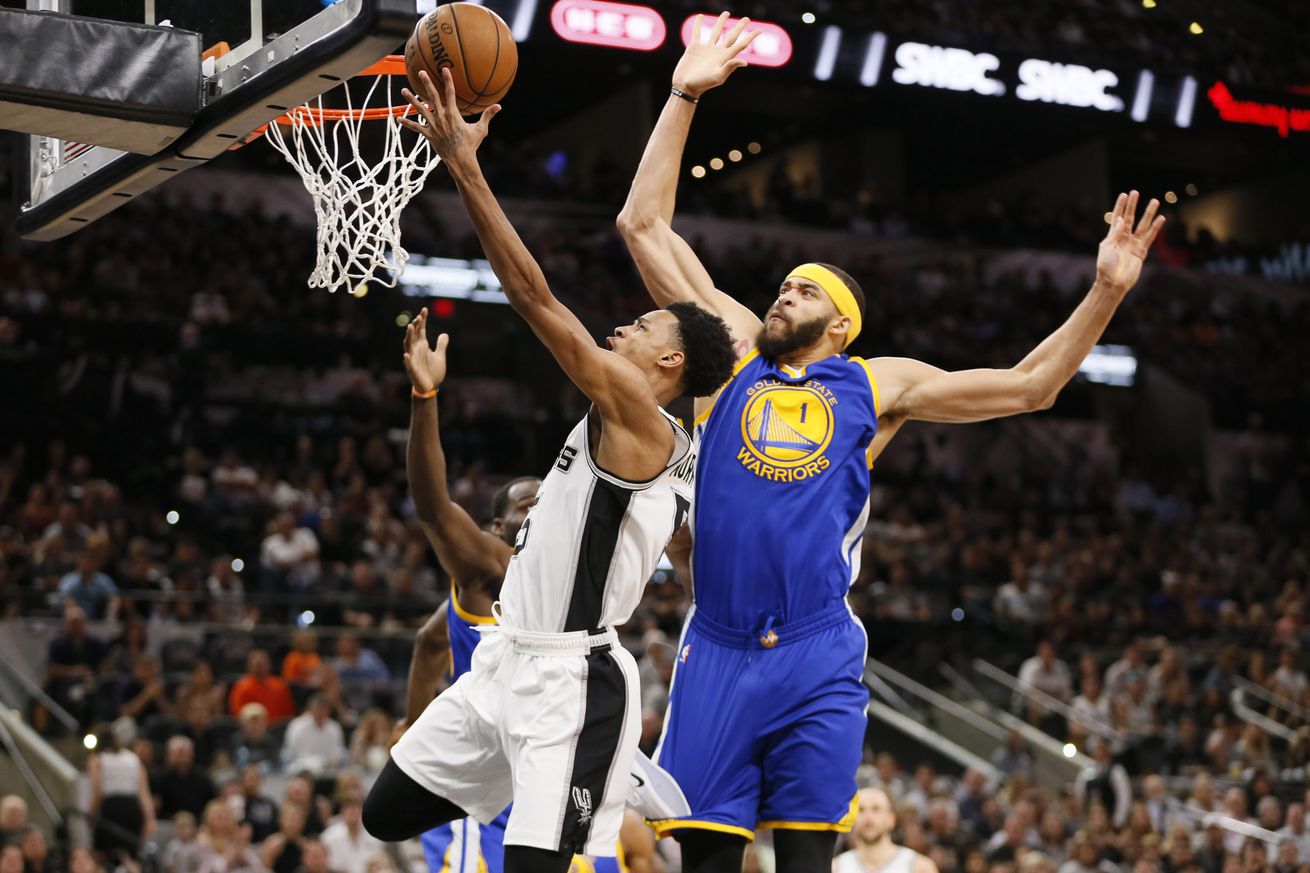 The season has ended, but the dream still lives

Be proud of the Spurs, my friends. As hopeless situations go, their Western Conference Finals series against the Warriors was akin to the Battle of the Alamo. There was simply no real possibility of overcoming this All-Star team masquerading as an NBA franchise. How much the presence of Kawhi Leonard might have mattered is a debate to be had, but I’m not interested in it. I’m sure Pop will ultimately use the experience to better his team, to provide motivation, and to teach.

Just as the injury to Tony Parker bought Dejounte Murray valuable playoff experience, the injury to Kawhi allowed Jonathon Simmons, Kyle Anderson, and Davis Bertans to contribute in a place and time where they might otherwise have sat passively from the Spurs bench. It can only help for next year, when “Remember the Western Conference Finals” or some less stilted variation will echo throughout San Antonio the way a similar call once sounded at the Battle of San Jacinto.

Like a reincarnated William B. Travis cyborg, Kawhi will be back next year to draw lines in the sand. Murray will return with a season and a few playoff series under his belt, no doubt bulkier in body and in mind. He showed tremendous heart going against MVP candidates and super teams, though he needs to develop a jump shot to be truly lethal. The Spurs have people for that sort of thing. LaMarcus Aldridge will be back, even if you’d like to take him down to Mustang Island and bury him up to his neck in the sand after the job he did against Golden State. Part of me feels like facing that kind of defensive pressure probably wasn’t in the job description when he signed his contract two summers ago.

After that, things get a little murky. The Spurs’ current salary structure is such that 2018 is the magical year for clearing cap space, which means there’s limited possibility of adding a big splashy free agent this offseason. SA can match any offer for Simmons, but after his breakout performance you have to figure a team desperate for athleticism will put up a number that makes it tough for the Spurs to keep him. After a memorable series against Houston, Patty Mills was a ghost in the Conference Finals. He will still get paid, and the Spurs may not want to devote long term resources to a physically limited player with his skill set.

And then there’s Manu. My theory is that the outpouring of appreciation from fans toward the end of game 4 might have swayed him the opposite of whichever way he was leaning prior to the game. Maybe he decides it’s the right way to go out, or maybe he reminds us all that nobody gets to decide when he’s done but him. “It felt like they wanted me to retire,” Manu said jokingly of Spurs fans after the game. But Manu has always gone his own way, and the game 4’s unofficial retirement party may have been the motivation he was looking for to get back at it.

Right now, let’s just say Manu is standing at the beach where all the retired NBA greats go when their careers come to an end. He’s sitting in the parking lot with one sneaker unlaced, preparing to jump into the sand. But he still hasn’t taken that sneaker off yet.

If and when Manu retires, there will be no shortage of tributes, including those written by the writers and readers of Pounding the Rock. But right now isn’t the time for retrospectives, not when the Spurs have such a bright future ahead of them. It’s easy to fall into the trap of thinking that Conference Finals berths are a foregone conclusion when half of Pop’s 20 seasons with the team have ended four wins or fewer from the Finals.

But this year’s Spurs were a huge question mark following Tim Duncan’s retirement. Players like Aldridge and Pau Gasol were brought in to paper over that gaping hole, but for all practical purposes this was a rebuilding year. How many teams go to the Western Conference Finals and go up on the number 1 seed by 25 points in a rebuilding year? Expect more of the same next year, but with the added benefit of experience for players who were rookies this year: Murray, Bertans, and Bryn Forbes. Now they have a taste of the playoffs, and they have the taste of defeat.

Every year since the Spurs won the 2014 championship, they’ve advanced another round in the playoffs. Although it didn’t feel like it at the time, that ring was effectively the end of the Duncan Spurs and Kawhi’s tutelage. The presence of Pop and Tim, Tony, and Manu, and the 60+ win regular seasons have masked the truth that this is a rebuilding team that’s learning how to win. With each season, their best player adds something new to his game. Now it’s up to Kawhi Leonard to lead the Spurs to the next plane.

After what transpired this year, I pity the team that tries to get in his way.