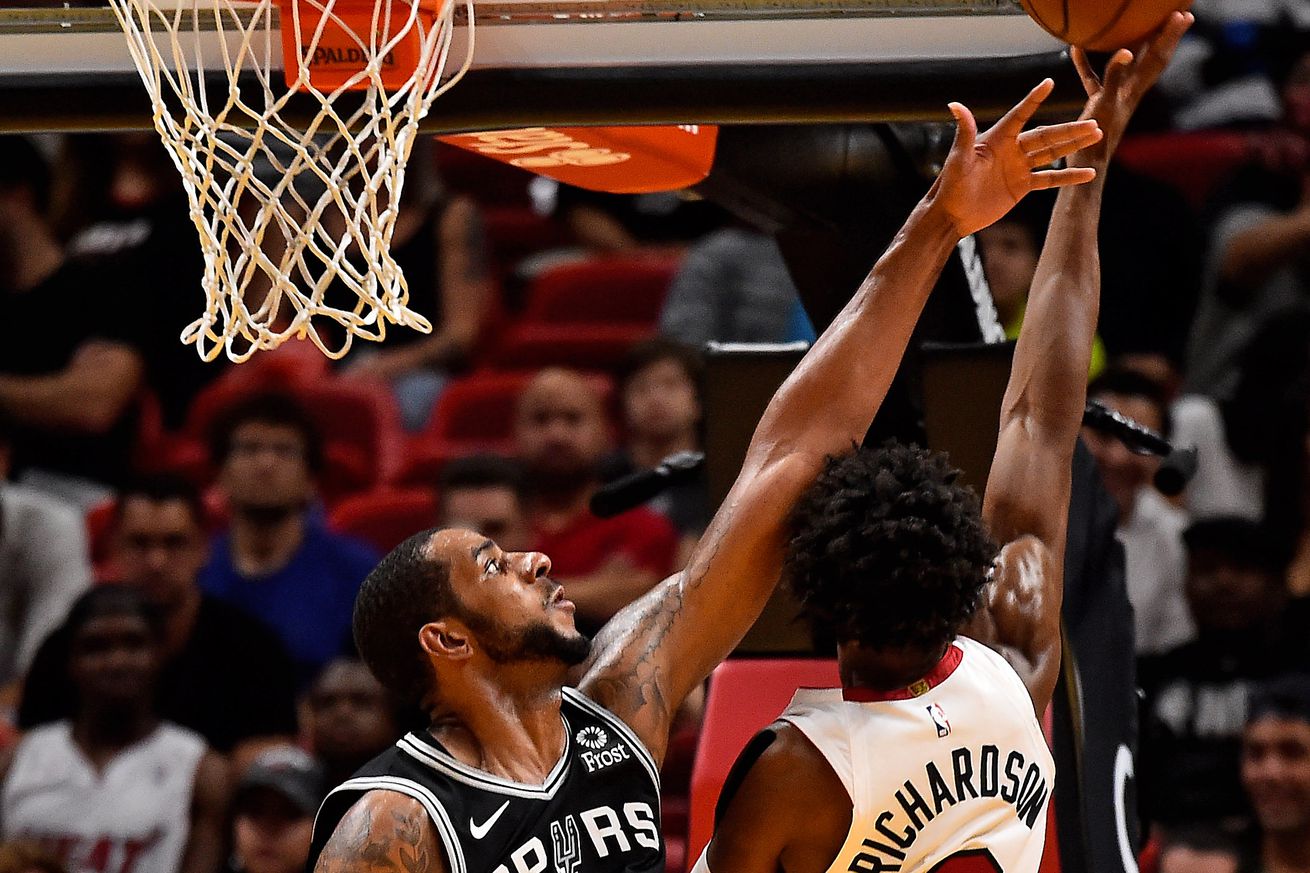 Hassan Whiteside dominated on both sides of the court, helping the Heat beat the Spurs for the first time since LeBron left town.

The Miami Heat ended a nine game regular season losing streak to the Spurs tonight, which dated back to the Spurs’ 2014 championship season. Neither team was at full strength, with the Spurs missing Pau Gasol, Rudy Gay, and Dejounte Murray and the Heat missing Dwyane Wade, Goran Dragic, James Johnson, and Dion Waiters. Derrick White returned for the Spurs, putting in fifteen minutes of predictably rusty play, but showed flashes of the kind of point guard play the Spurs need to help take some of the burden off of DeMar DeRozan’s shoulders.

If there’s something I’ve learned about the Spurs over the years, it’s that they are excellent at not repeating past mistakes. I was certain the Spurs were going to overcompensate for the previous game’s horrendous start and jump all over the Heat early. The Heat must have missed the memo, as they exploded for an early 15-0 run, mostly at the hands of Hassan Whiteside.

Whiteside had five of his nine blocks in the first eight minutes of the game, with each block coming against a different Spurs player. The Spurs are not a team that scores a lot of buckets inside the painted area – coming into tonight they were 29th in the NBA at 40 points a game – but with Whiteside manning the painted area, the Spurs ended up with only 24 points in the paint tonight. After the game, Pop said “I think he [Whiteside] had 37 blocks at half,” which strangely enough is the exact number I came up with in the unofficial stats I store in my brain during games. NBA.com has the official number at eight, but I think they are mistaken.

Whiteside didn’t just dominate on the defensive end. He put together ten points in the first quarter, and ended the game with a season high 29 points. Throw in 20 rebounds, and it’s clear the Spurs had absolutely no answer for Whiteside tonight.

After the early 15-0 run from the Heat, the Spurs spent the rest of the game trying to play catchup. To the Spurs credit, they never gave up nor seemed phased. Patty Mills kept the Spurs within shouting distance in the first half, scoring 14 points. Davis Bertans also showed signs of life, hitting a couple of three pointers in the first half. Mills and Bertans ended the game with 20 and 19 points respectively, though it took Mills 22 shots to get his 20 points, compared to Bertans’ 10 shot attempts.

The Spurs began the second half down eight, which felt like the absolute best case scenario. A Mills three pointer two minutes into the third quarter put the Spurs within five points, but the Spurs would only score two points over the next four minutes, and the Heat were once again able to extend their lead to double-digit points. It felt like the game was slipping away late in the third, but Bryn Forbes was able to bring the Spurs within 11 with a three pointer to end the quarter.

Wayne Ellington made his presence felt to start the fourth, hitting two three pointers and extending the Heat lead to 19 points. Nothing really seemed to happen throughout most of the fourth quarter, and an uninspired loss felt inevitable. With four minutes to play in the game, the Spurs found themselves down by 14 points. A four point run by DeRozan brought the Spurs within ten with three minutes to play. Over the course of the next two minutes of game play, the Heat would turn the ball over five times. Two of those turnovers led to easy baskets by Forbes, but the other three turnovers ended up leading to missed three pointers by Spurs players. Those misses proved to be too costly to overcome, and the Spurs found themselves on the losing end of another fourth quarter comeback.

The Spurs drop to 6-4 on the season, with their next game coming against the Houston Rockets in San Antonio on Saturday.

The Heat were able to neutralize three of the four main statistics in which the Spurs had an advantage coming into the game. The lone exception was three point shooting, where the Spurs shot a solid 40% to the Heat’s 31%.

Neutral statistics were all either won by the Heat or remained neutral. Out of all the statistics the Heat had the advantage in coming into the game, fast break points was the only one that proved to be advantageous for this Spurs in this one.

Considering that limiting the impact of Whiteside was likely a key to the game for the Spurs, allowing him to dominate on the boards and fire up the crowd with his blocks is not likely going to sit well with the coaching staff. I saw several plays where the Spurs’ players had inside position on their opponent, only to watch the opponent out muscle (or hustle) the Spurs player to the rebound.