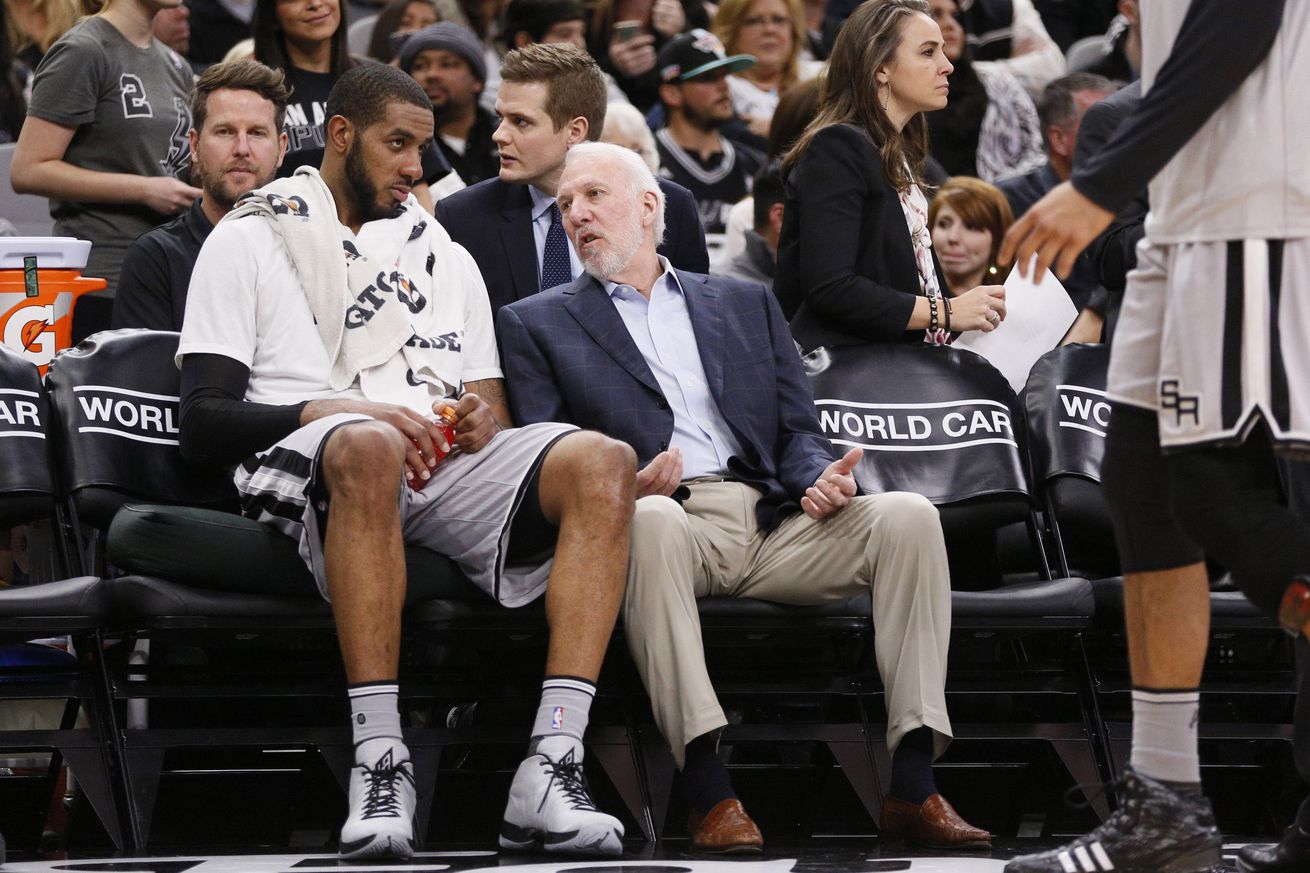 …can all go jump in a lake.

With 43 wins already on the board and 8 games still to go, the Spurs are poised to blow by practically every preseason win total prediction made. 1 more victory, in fact, will push them past the Westgate’s preseason over/under of 43.5 — a number that came out before Dejounte Murray’s season-ending injury, mind you — which was perhaps the easiest over bet of all time.

Instead of missing the playoffs entirely, or at best, fighting to sneak in as the 8th seed, the Spurs have a 6.5 game advantage on the 9th placed Kings and a real chance at finishing as high as 5th.

But to do that they’ll need to continue their recent winning ways as they navigate a sneakily challenging last two weeks of the season. Despite having the 2nd easiest remaining strength of schedule, per Tankathon, the Spurs face several potential pitfalls.

The first comes Tuesday night against the Hornets, a good home team with its playoff hopes, though slim, still alive thanks to Jeremy Lamb’s incredible buzzer beater on Sunday. The Hornets are 23-15 at home and have a net rating of +4.5 in those games, according to Cleaning the Glass. Combined with the Spurs’ season-long road struggles, this game could easily get away from them if they aren’t focused from the tip.

A home game against the Cavaliers on Thursday is up next, and with the Bulls breathing down the Cavs’ necks for the 3rd worst record (and thus a 14% shot at Zion), they have every reason to lose, something they will likely easily accomplish in San Antonio.

After that, the Spurs will have two days off before hosting the Kings, a team they’ve lost to twice, though both games were in Sacramento. The Kings will likely be officially eliminated from playoff contention by the time they get to San Antonio, as they have road games against the Mavericks, Pelicans, and Rockets before then. They will also be on a road SEGABABA coming from Houston, so its unlikely the Spurs will face their best effort. Still, the Kings are young and dangerous team, for whom rising in the draft lottery is irrelevant.

Two nights later, the Spurs will host the Hawks, a team that is essentially locked into the 5th best lottery odds. The danger with this game is that the Spurs could already be looking forward to a SEGABABA of their own as they’ll travel to Denver to play the Nuggets the next day. The Hawks also employ a shifty young guard prone to absurd scoring outbursts, a prototype that’s equaled Spurs’ issues all season long.

Once they get to Denver, the Spurs will have to deal with the 2nd best team in the West, and the 2nd best home team in the NBA. Per Cleaning the Glass, the Nuggets have a net rating of +10.7 at home, and they’ve lost just 6 of their 36 games there. The Nuggets won’t have a rest advantage, though, as they play the Warriors in Oakland the night before with a 7:30 (PT) tip. That game may well decide the 1 seed, so the Nuggets will likely be fully committed to winning, and less concerned about saving something for the Spurs.

After that, the Spurs will fly across country for a meeting with the Wizards, who are locked in a battle with the Grizzlies and Mavericks for the 6th, 7th, and 8th best lottery odds. Then the Spurs will travel to Cleveland for another game against a team with little incentive to win.

The Spurs’ last game of the season will come at home against the Mavericks. Regardless of the lottery-related implications, the Mavericks will want to close the season with a win, especially in San Antonio. Although they’ll be on their own SEGABABA, having played the Suns in Dallas the night before.

Strength of schedule and home/road splits aside, the Spurs head into the playoffs having played their stars more than at any time in recent history. Both DeMar DeRozan and LaMarcus Aldridge are on pace to play more than 2600 minutes, something no Spur has done since Tim Duncan in 2007-08. Much of the team is likely playing with bumps and bruises, and a night or two off as they approach the playoffs would probably be good for everyone.

Moving up in the standings sounds nice, but if it comes at the cost of not entering the playoffs at full strength, it’s rarely worth it. And if the Spurs’ aren’t concerned about the standings, there’s no way they get to 50 wins.

Then again, given the catastrophic injury to Jusuf Nurkic, there’s probably more incentive than ever to fight for the 5 seed. Not seeing the Warriors, Nuggets, or Rockets in round 1 is probably the #1 matchup concern of every team in the lower half of the Western Conference playoff picture. If the Spurs want to increase their chances of seeing the 2nd round, closing out with a winning streak is the best way to do it, regardless of the implications.

On top of that, the Thunder have the league’s 5th toughest remaining schedule and the Clippers the 7th, per Tankathon. Plus, the Jazz and Thunder, both currently a game ahead of the Spurs, still have to play each other 1 more time, meaning 1 of them has at least 1 guaranteed loss coming.

Of course, the Spurs have shown themselves to be especially vulnerable to trap games and playing down to their opponent, having lost to 3 of the NBA’s 4 worst teams this season. But this version of the team appears to have most of their focus issues sorted out, having taken care of business in their rematch with the Knicks last week and against the short-handed Celtics on Sunday night.

The game against the Hornets may well be the bellwether. If the Spurs win, they will likely continue playing for seeding, pushing as far as they can go. With every game winnable, there’s simply no reason to let off the accelerator just yet, especially considering how well they’ve been playing.

Since the All-Star break, the Spurs have been the 6th best team in the league, with a net rating of +4.8, and that includes those embarrassing losses to the Knicks and Nets. It’s not a home-driven sample size issue either, as the Spurs have played 8 games in San Antonio and 7 on the road.

Assuming their three-point shooting returns at some point – they’re hitting just 34.8% since the All-Star break, 18th in the league, though they still lead the league over the full season – the Spurs may well be able to play even better than that.

If that’s the case, it’s not unreasonable to think they can finish strong. That means 50 is still on the table. That means 50 may even be likely. That means more than half of y’all are wrong.