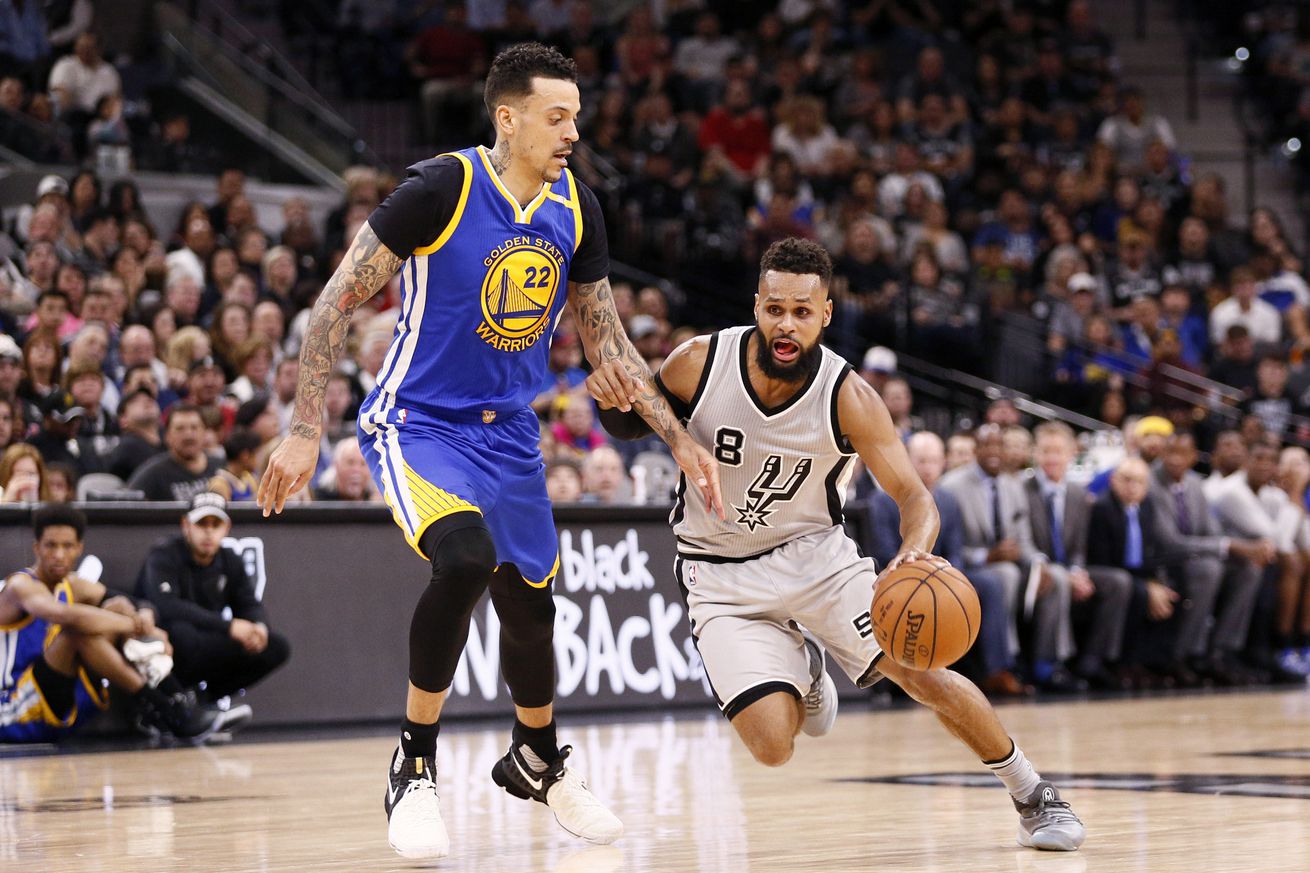 With the headliners out, Patty Mills and the gang propelled the Spurs towards the number one seed in the West

What were you doing during the first Spurs-Warriors matchup? I was doing my taxes. AT&T staff were apparently showing fans eating nachos on the jumbotron. Little Emilio of Monterrey, Mexico (a huge Warriors fan) was sleeping on his mother’s lap.

No disrespect to Patty Mills (who tied a career high with 21 first half points) and Ian Clark (who scored a career high 36 for Golden State), but this wasn’t what we had expected. Sending out B-lineups in a game with such monumental stakes is, to quote Manu Ginobili, “awkward.” It’s tantamount to going into a giant court case with nothing but paralegals and My Cousin Patty representing the state and the defendant.

In case you’ve been away for awhile, the Spurs have been chasing the Warriors for the 1 seed since the first week or so of the regular season. When Kevin Durant went down with a knee injury on February 28th, Golden State still held a four game lead over SA with two more head-to-head matchups left. Suddenly, the Spurs had an outside chance of snagging homecourt advantage in the playoffs by overtaking the superteam whose Finals berth this season seemed to be fait accompli. But with the Warriors still rolling out three All-Stars, most observers assumed their four game cushion would keep them at the top of the standings.

Even after losing four out of six games heading into Saturday night, Golden State held a 1 and a half game lead over the Spurs. What’s more, Kawhi Leonard, the Spurs’ Top 3 MVP candidate, was going through concussion protocol. That was followed by the announcements that, a) LaMarcus Aldridge was sidelined with minor heart arrhythmia and, b) the team would also be without 2/3rds of its point guard depth with Tony Parker and Dejounte Murray also being sidelined. It seemed that Golden State’s luck had finally turned.

Then, Warriors coach Steve Kerr made an announcement of his own, ensuring Saturday night would be a 100% All-Star free affair.

Obviously it’s awkward for a Spurs fan to say anything critical about a team resting their players. But the timing and scope of this decision by the Warriors struck me as odd. If rest is so important, why not stagger who rests? This is presumably the luxury having multiple All-Stars. The decision wasn’t made in haste, either. Kerr himself admitted that he’d contemplated as early as last summer resting his players for this particular back to back.

But to sit all your top players all at the same time seems a bit draconian. Why not sit Curry on the first night of the back to back so he can wistfully imagine what might have been had Minnesota drafted him in 2009 instead of Jonny Flynn? Then, against the Spurs, they could have sat Draymond Green and Klay Thompson with the knowledge that Kawhi Leonard was going to sit out (the announcement was made Friday afternoon before the Wolves game.) At least having Curry in the lineup gives you the undisputed best player on the court and more than a fighting chance.

By pitting their bench versus the Spurs bench, the Warriors essentially embraced the idea of losing their third straight game along with giving the tie breaker to their biggest postseason threat. Unless you’re truly confident that you can win in the playoffs without homecourt advantage, why would you give up such a huge advantage for the sake of rest?

“I truly feel for the fans who bought tickets” Kerr said after the game, “but I have to do what I have to do. Our team has been through the wringer here the last couple of weeks. The travel has really worn us out.”

Hopefully, Emilio’s family, who drove seven and a half hours across the border from Monterrey and allegedly spent four figures on tickets, found the explanation satisfactory.

If nothing else, the topic of rest certainly afforded the ABC broadcast crew a topic of discussion during an otherwise uneventful second half. Though I don’t begrudge smart people like Jeff Van Gundy, Mark Jackson, Michael Wilbon and Jalen Rose their opinions, the topic places networks like ESPN and TNT in an interesting place. As one commentator noted, the NBA is such a successful international business, teams rightfully assume that fans will show up and continue to follow the game even if their favorite stars are out with injuries or for rest (to which last night’s sellout at the AT&T Center and the subsequent national discussion which surrounded the game must attest.) Owners and players are taking in more cash than ever before, with players having marketing opportunities that NBA stars could only dream of 30 years ago. Why risk catastrophic injury by playing tired?

And the root of much of the league’s income is, of course, from television, which was borne out by David Stern’s $250,000 fine of Pop and the Spurs for sitting four of their top five players several years ago for a nationally televised game against LeBron’s Miami Heat. With the role and power that television networks have in determining start times for games and games being broadcast when teams are on back to backs or at the ends of road trips, it seems disingenuous for the employees for those networks to ask their on-air talent to criticize the players and organizations who respond to those situations by giving their players more rest.

As the Spurs’ second half lead stretched towards 30, even the starting reserves got a chance to rest. Mills, the first half hero, played only five minutes. The magnitude of Kerr’s decision (both for the fans and from a basketball standpoint) became clear. Should the Spurs manage to meet and beat the Warriors in the playoffs this spring, their fans and Golden State fans alike will look back on this night as the time Steve Kerr had the chance to put his foot on the Spurs throat and elected instead to take off his shoes and lay down.

For San Antonio, the win means both everything and nothing. They are still technically behind the Warriors in the standings, and even if they were to secure the one seed there’s no guarantee their best squad could beat the Warriors’ best. For once, it was gratifying to see the media and fans’ ire mostly be directed at another team resting its players rather than the Spurs (sadly, there were still a few SA “fans” who managed to accuse Pop of resting Kawhi and LaMarcus.) Who knows whether Pop, being the good sport that he is, would’ve seen the announcement that Kerr was sitting his All-Stars and used it as an excuse to get more rest for his guys even if they’d all been healthy. And with all the season scoring lows the Warriors have been putting up lately, maybe the final score would’ve looked exactly the same even if all the stars had played.

All we know now is that, even in the age of the Superteam, the NBA is as unpredictable and crazy as it has ever been. We also know that the Spurs’ bench looks like the best in the league, capable of scoring 60 in a half and of blowing out teams on its own. And we know Patty Mills could get a contract the size of Australia this offseason. Come April and beyond, the Spurs will need all their stars present and fully healthy to make a run.

But times like these are why the Spurs have built and maintained depth while other teams have been cashing theirs in to sign big free agents. At least for one night, the fans were treated to a collection of benchwarmers who played like a Superbench. Kawhi Leonard is rightfully in the discussion for MVP this season, and should in many ways lead it – but in securing the tiebreaker over Golden State, right now it’s Patty Mills and Company who are looking like the MVPs in San Antonio.