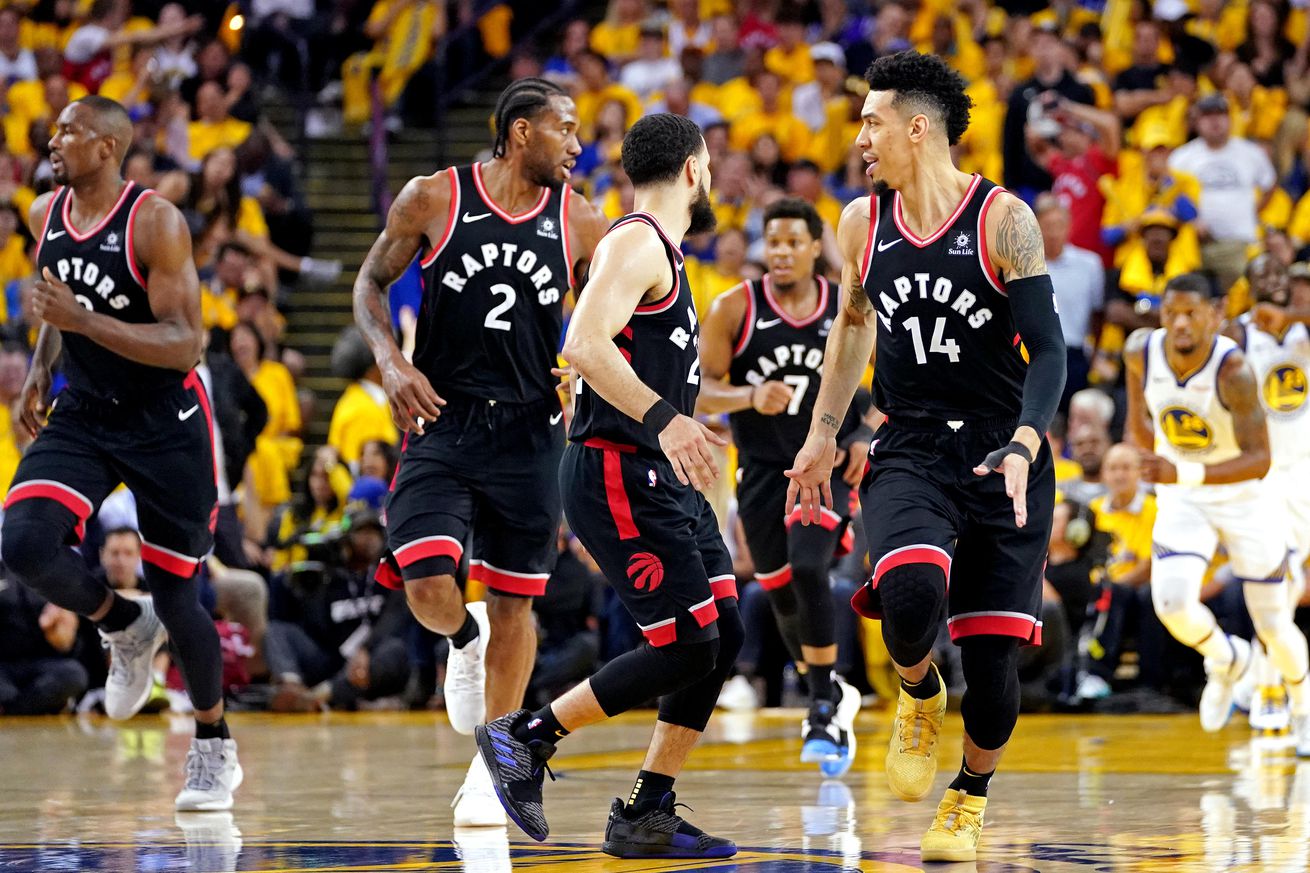 What a wild game that was.

Game Three was fascinating, both in the lead-up (would Klay Thompson play or not?) and in the game itself (would the Raptors actually beat a wounded team in a game that the Raptors absolutely positively had to win?). And while the first question was answered early, the answer to the second question wavered between “well of course they will win” to “wow, will this half-Warriors team actually come back on and win this game?”

Check the box score: Every Raptor who shot the ball in Game 3 made 50% or more of their shots. Has that ever happened before? Another fun stat: The Raptors scored 123 points on 82 shots.

In contrast, the Warriors went 39.6/33.3/85.3. Yuck. They only stayed in the game as long as they did because they got 8 more offensive rebounds and shot 9 more free throws. And because of Stephen Curry.

Speaking of a great line, Curry’s line was 25 points, 8 rebounds, and 4 assists. Oh, that was at halftime. If Curry repeated that line in the second half, he would have wound up with 50 points, 16 boards and 8 assists. Of course, at halftime the Warriors were down by 8. So Steph repeating his first-half stats would have meant he did that in a game his team lost by 16. Alas, he did not repeat his first half line. He wound up with “only” 47 points, 8 boards, 7 assists, plus 2 steals — and his team lost by 14.

As pointed out to me by a friend before Game 3, while we all recognize what a great player he is, Curry strangely remains underrated. Games like this remind us of his unique and wonderful talents.

At the end of the day, the Raptors won a game they had to win, the undermanned Warriors (words we haven’t spoken in years) fought hard and lost — and we have no idea who will, or should, win the NBA Championship.

Other thoughts, starting with my ex-Spurs:

1. After the first two games, I pointed out that Kawhi Leonard was clearly playing hurt, with none of the athleticism and explosiveness we have all gotten used to. I also pointed out that virtually none of the announcers or analysts have mentioned this fact. True to form, Mark Jackson’s pregame comments about Kawhi were typical Jackson clichés about Kawhi needing to “step it up”. Thankfully, it was obvious from the start of the game that Kawhi felt better. (When I was coaching, and scouting for players, we used to say we could tell if someone was “a player” by watching warm-ups. Last night, I wrote in my notes, after the first two times he touched the ball, that Kawhi was moving much better.) He was not 100% Kawhi, but he clearly was moving better — maybe 70%. And 70% Kawhi is pretty damn good.

2. My other ex-Spur, Danny Green was the DannyGreen!! Spurs fans remember so fondly. And while he was not 70% like Kawhi, DannyGreen was 60% — from the three point line. 18 points on 6 threes. This was the Danny Green Spurs fans loved — including the breakaway blocked shot which demonstrated his hustle, timing and singular defensive talent. It was great for this Spurs fan to see him do it again on the big stage. Remember that time when we ran a poll earlier this season asking for SpursNation’s favorite ex-Spur? Danny Green won easily.

3. Spurs fans must have felt a sense of déjà vu on the several plays in which Kawhi manned the middle of the break, Green flared to the corner, Kawhi passed it at the perfect moment, and DG3 drained the corner jumper. DejaVuDanny!

4. The other ex-Spur, Steve Kerr, had another excellent game coaching his short-handed team. Kerr rightfully got credit for inserting DeMarcus Cousins into the starting line-up for Game 2, as he recognized that Boogie’s entire mindset was as a starter. Kerr started Cousins again in Game 3 — and quickly recognized that Game 2’s success was not going to be repeated. Seeing that Cousins was ineffective, Kerr played him only 19 minutes, three less minutes than Aussie Andrew Bogut, who was playing in the Australian Basketball League a few months ago.

5. Before the game, Jeff Van Gundy said the Warriors were home to play “in their depleted state”. Was he referring to California?

6. A big question going into Game 4 Friday night is whether the Raptors can shoot like this again. In Games 1 and 3, they made their shots and won. In Game 2, they did not, and they lost. Sometimes it really is a simple game.

7. Assuming Klay plays (effectively) in Game 4, one would expect the Warriors to win in front of their home crowd. Assuming Kawhi continues to get healthier, an 80-90% Kawhi will be even better going forward. So the real question may be whether Kevin Durant makes it back, and whether the Warriors can integrate his talents seamlessly (not necessarily a given). If so, the Raptors (up two games to one, almost up three – zero, with homecourt advantage) will likely be underdogs. (Current Vegas odds have the series basically a toss-up.) If neither Klay or KD come back Friday night, or they do and the Raptors win Game 4 anyway, the Warriors will likely never play in Oracle Arena again.

A Spurs fan’s reaction to the historic Game 3 of the NBA Finals
Source: Pounding The Rock