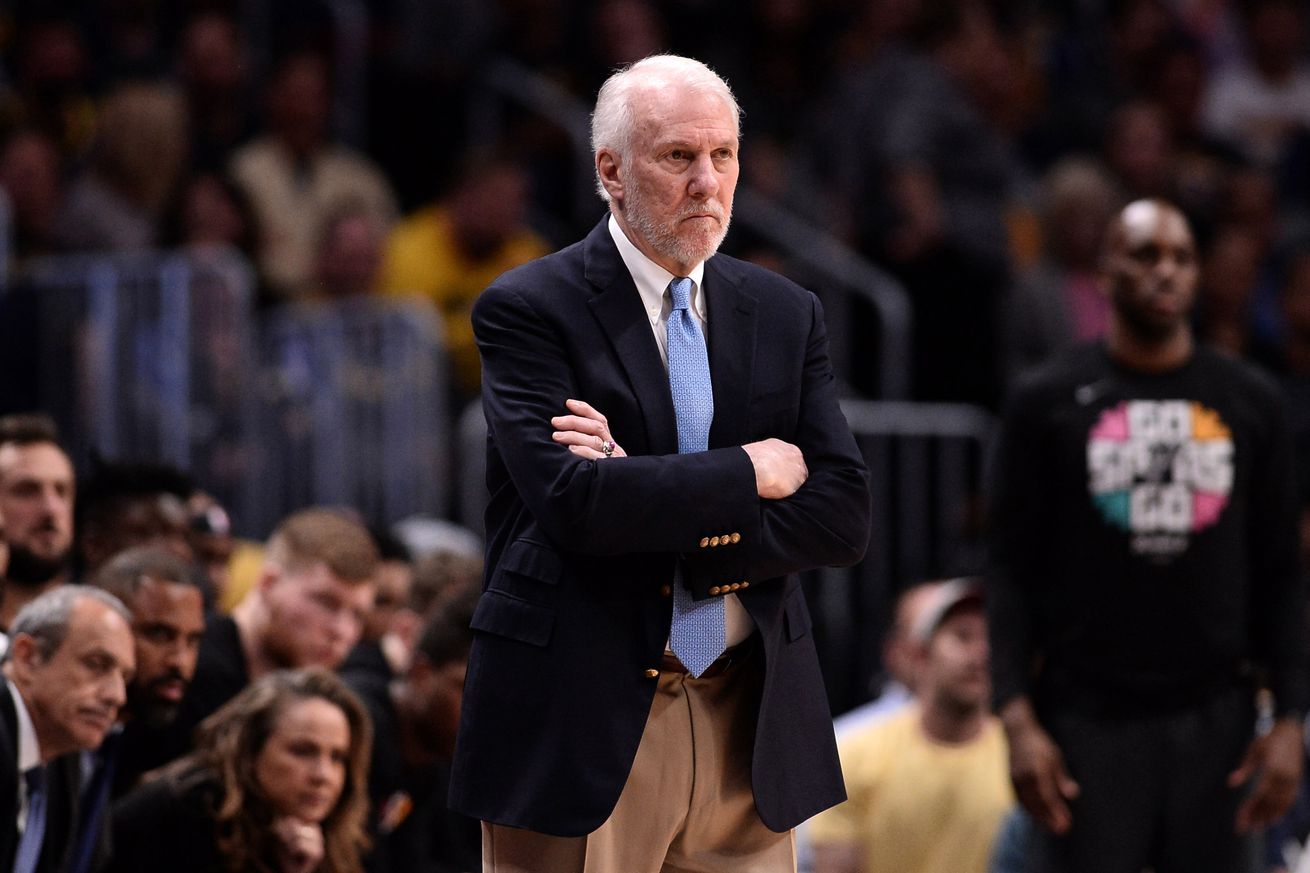 Predicting which teams will make the playoffs in the West, including the Spurs (unlike some projections).

Fivethirtyeight.com posted their record projections for the upcoming NBA season last week, and in an ongoing trend, the Spurs are not expected to do well. In fact, this may be the lowest they have been projected to finish yet, with just 37 wins and a 20% chance of making the playoffs based on this particular formula.

As Jacob Goldstein of BBall Index recently discussed with PtR’s Bruno Passos after his model predicted the Spurs would win just 39 games, it is important to remember that these projections are based on mathematical formulas and cannot take certain aspects into account that the human mind can. (For example, due to his superior advanced stats, computers are probably seeing the loss of Davis Bertans as a bigger hit to the Spurs’ roster than it will actually be.)

Still, even if the West did get stronger this summer, 37 wins and the 12th seed seems pretty low for a team that won 48 games last season with roughly the same roster and will have Dejounte Murray — a defensive stud with determination to prove himself on offense — back on the court, a more developed Lonnie Walker IV (who just tore up the Summer League), and shored up holes with additions like DeMarre Carroll. Not to mention there is other interior improvement to expect — DeMar DeRozan being more comfortable in his second season in the system is one aspect a computer can’t predict — and they still have Gregg Popovich as head coach.

It’s hard to imagine this seemingly improved Spurs squad will win 11 fewer games than last season, and because of that I decided to create my own Western Conference playoff projections and predict where the Spurs will actually fall this season without any computer formulas. (Hint: they’ll be higher than 12th.)

I believe that the team that took seven games to beat the Spurs in the first round this year is going to be first in the West next season. They’re going to come into this next season with a lot to prove and will do just that. While a lot of the other teams in the West have new players to break in and will need time to adjust, the Nuggets are coming in with the same group as last year — including possibly the best young core in the league — giving them an advantage over nearly every other team in the West. Their style of play is very similar to the Spurs, and with Nikola Jokic and Jamal Murray leading the way, they should take another step forward this season. As for how they will do once they’re in the playoffs. I think the Nuggets still need more time before they are true title contenders, but when just discussing the standings, they have this whole regular season thing down.

As tough as it is to admit, Kawhi Leonard is going to lead another team to the second seed in the playoffs. It’s hard to deny that such a fantastic player, with his new accomplice in Paul George, isn’t going to do well during the regular season. Doc Rivers took a group of average players into the playoffs last year, and with two superstars in their prime, he’s going to take them even further. Kawhi is where he wants to be, and as long as he doesn’t get sucked into the Hollywood limelight, he will be contending for yet another title. Still, his need for rest games will likely keep them from earning the top seed in the West.

I would imagine Blazers fans are just as annoyed with the above-mentioned projections as Spurs fans. After having a great season last year and adding Hassan Whiteside to their lineup, the Blazers are always looking to prove themselves during the regular season. This was a tough pick because there is reason to believe that the Lakers would do better than the Blazers, but the Blazers play so hard and are so difficult to beat at home that I couldn’t put anyone else above them. Damian Lillard and CJ McCollum get more and more refined together every season, and they are going to sneak up on the other Western Conference teams just like they always do.

LeBron James and the Lakers are going to take it easy this upcoming regular season. They have a solid team, and adding Anthony Davis is going to be exactly what they need to get them back into the playoffs. I wasn’t always a LeBron fan, but I’ve learned to really respect him as a player and am excited to see what he does as the starting point guard. He doesn’t care about what seed he is, which is why they are going to do what it takes to just barely get home-court advantage. He’ll go into beast mode and give his all once the playoffs start, but not before.

Mike D’Antoni has a lot on his plate. With James Harden and Russell Westbrook together again, this is going to be the biggest challenge he has ever had not because of the lack of talent, but because he has two of the most ball-dominant players in the league now (and one can’t shoot). That being said, it will be interesting to see what D’Antoni can do with them. As an offensive genius, he is one of the few coaches in the NBA who can handle a challenge like this. The Rockets are still going to throw up a lot of threes, but adding Westbrook means a bunch of adjusting during the regular season, and it will likely take until around the All-Star break before they find their footing.

Adding Mike Conley and Bojan Bogdanovic to this team keeps them in the playoffs and possibly even making the second round this time. Their offense should improve with those two likely replacing Ricky Rubio and Jae Crowder in the starting line-up, and their already superior defense shouldn’t see much (if any) drop off. Donovan Mitchell is going to have an even better year, and they are going to be the dark horse coming out of the West.

They are making the playoffs, and anyone who doubts that needs to look back at the 22 previous seasons. Murray is going to bring a strong backcourt defensive presence, adding Carroll to the squad will add some extra physicality that has been lacking, and Pop is going to do what he does best in maximizing each player’s talent.

They retained Rudy Gay and are adding Trey Lyles, who I think is going to have one of his most efficient seasons. He’s coming off a down year, but if anyone can get the best out of him, it’s the Spurs. He has the tools to be something special if he gives his all and is hitting his threes.

One thing I am curious to see is how Pop adds Walker to the lineup. With a stellar summer league performance, he is definitely going to be looking for some more playing time. Bryn Forbes proved a lot this past season, so Pop will have to balance the minutes between those two. (Or maybe Marco Belinelli will be the odd man out.) Derrick White has become a fan favorite with the effort and hustle he puts on the floor.

The Spurs may not hit full stride right away, but they will follow their usual pattern of exploding when they get that plethora of home games across December and January, ahead of the Rodeo Road Trip — where they should also do better than the last two years now that there is some roster continuity and most of the players on the team have been through it before.

I have the Spurs at 7th because while the teams above will be hard to top, I do see them beating out the Warriors, who have a lot of adjustments to make after losing Klay Thompson for most of the year and adding D’Angelo Russell to their squad (more on them below). The Spurs are going to have to work harder than they ever have before and maximize their players’ abilities to their fullest, but they have shown over the past 22 seasons that they can do just that.

Not to mention, they added Tim Duncan to our coaching staff, giving our boys the best kind of mentor and someone with a handful of rings to show them what it means to be a champion. The system will prove itself once again.

Finally, I have the Warriors as the last team out of the West to make the playoffs. Losing Kevin Durant is going to hurt, and Thompson’s injury is going to leave Steph Curry without much help, but they’re still going to be a force to be reckoned with. I predict a bounce-back year from Draymond Green now that he is out of Durant’s shadow with something to prove, but with such a competitive conference, I don’t see them beating out any of the teams above. They have too many adjustments to make.

The Western Conference is going to be a battle, and no matter what happens, the eighth seed is going to have a chance to beat the first seed. One could even argue that the Spurs would rather face the Nuggets in the first round instead of the Clippers, which would be the case in these standings. (I know Pop doesn’t play those games, but it would be cool to get some revenge against the Nuggets. Would it be as cool as getting the chance to beat Kawhi? That’s for you to decide.)

There are a lot of other good teams in the West who could makes some noise. The Mavericks are going to come in with some extra talent, the Thunder still have guys on their squad who can produce, and the Pelicans have a new young core led by top overall pick Zion Williamson that is going to be very good once they develop. The West is going to be so much fun to watch.

Still, Spurs fans shouldn’t worry. This is far from the first time they have been underestimated, and yet they always prove the naysayers wrong. This season will be no different, and I can already hear the national media saying how the Spurs proved them wrong again.

Where do you think we will end up this season?

A Spurs fan’s preseason ranking of the Western Conference
Source: Pounding The Rock