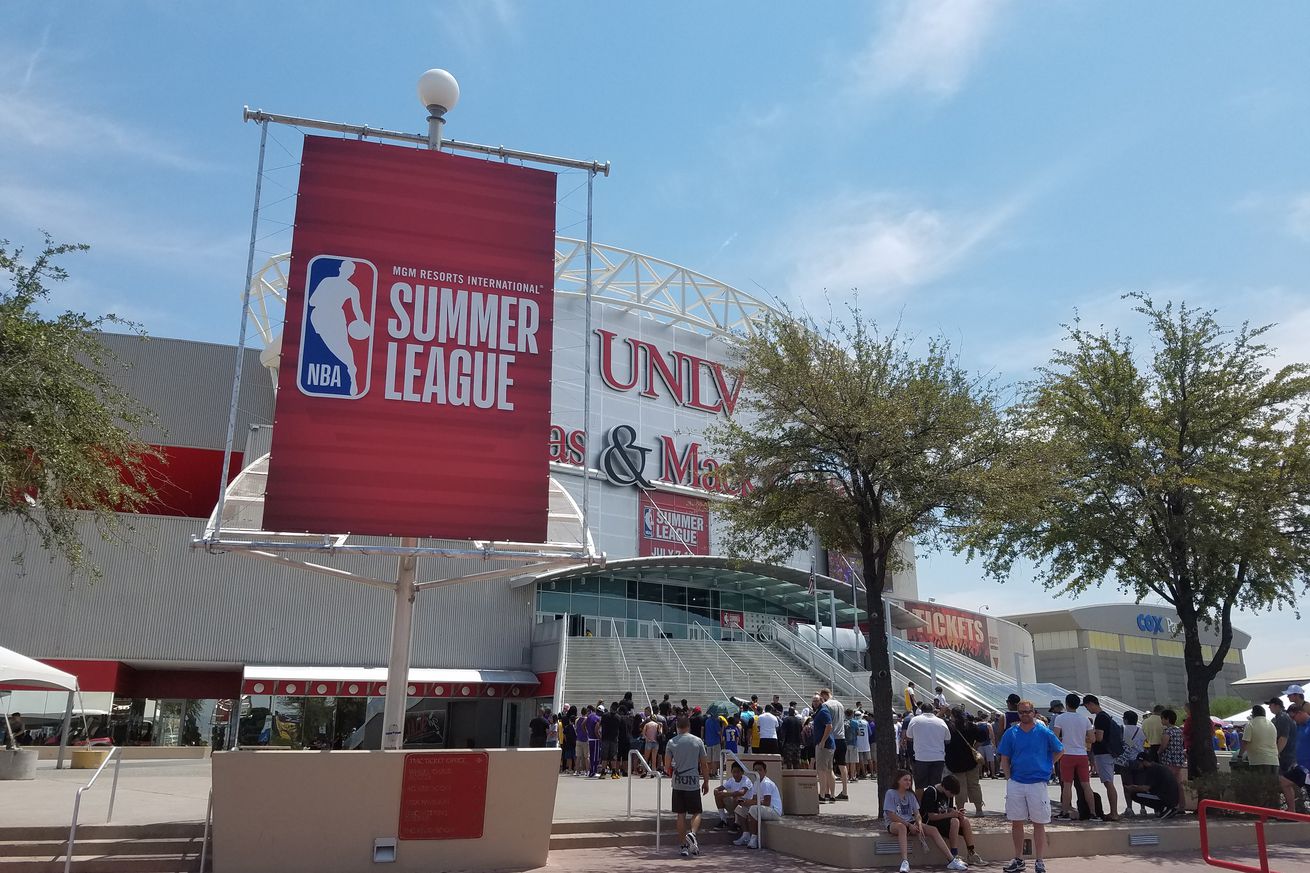 A trip to the desert provides a glimpse at basketball’s ability to self-sustain.

Ball is life, gives life, in the NBA’s midsummer oasis

“It’s a dry heat”—-that was the overarching theme of my first texts home from Vegas, having arrived well before the start of Summer League and with little to do but putter along the Strip. I spent most of that time following NBA news and trying to detect the early signs of Summer League among the throngs of punters, T-shirt-certified Party Specialists, and swimming-suit-clad bodies sprawled supine on the sidewalk. None of them knew who Shams is.

You don’t sweat there like you do in San Antonio — it’s a dry heat, after all — but you still feel all 115 degrees of it. As the sun beats down, the moisture slowly, quietly exits your body, leaving behind a fine film of salt on your skin and a thin line of chapped flesh where your lips used to be. One moment I’m people-watching; the next I’m certain I’ll die if I don’t immediately chug a pitcher of water. Then suddenly the Spurs announce they’re signing of Rudy Gay and all thoughts of self-preservation dissipate with whatever moisture I have left as I read everything I can find about Achilles injuries.

They’re not ideal conditions for organic life to thrive, but the NBA’s premiere offseason competition continues all the same. While it was once relatively easy for bloggers to get media access, and nearly every fan could count on an up-close experience, this year’s LVSL reached new heights of spectacularity. That included the first full sell-out of the Thomas and Mack Center and the adjoining Cox Pavillion, thanks in no small part to the city’s proximity to LA and the hordes of Lonzo-mad Lakers fans that made the trip. I attended the first Saturday of games and arrived at noon, only to find hundreds of fans were already waiting outside. It was a larger crowd than even the event organizers seemed to have prepared for, leading to a blitz through the front doors as everyone looked to claim the best seats possible.

I met up with Pounding the Rock’s Recap-Maester, Mark Barrington, who was also in town for one hot minute. Beers were consumed, basketball was discussed, and I showed him a surefire way to lose money at roulette. We also caught San Antonio’s first game of Summer League, a barn-burner against the Summer Heat which they lost in the final seconds, in spite of Bryn Forbes’ best efforts.

Forbes has gone nuclear in the desert, one of the few bright spots in an otherwise average-to-disappointing Spurs offseason. He’s not only been the most-polished Spur on the floor; he’s leading scorer for the entire Vegas Summer League, at just over 29 points per game. He’s knocked down threes, looked good off the dribble, and shown a sweet touch from mid-range. He looks to be in excellent shape, as does his game, which could portend good things if PATFO retain him for a second season (he’s currently non-guaranteed).

But what happens in Vegas sometimes stays in Vegas, at least in terms of scorching summer performances. While rising superstars like Blake Griffin, John Wall and Damian Lillard have all been standouts, other SL MVPs include Josh Selby, Jerryd Bayless and Glen Rice Jr, with the most ideal realistic scenario for Forbes being to end up in bucket number three, joining the ranks of Spurs summer alums Jonathon Simmons and Kyle Anderson who have kept their stocks trending, sustainably, in the right direction.

I spent some time with other SBNation bloggers, who are all stupid talented and incredibly passionate basketball junkies; being in a room with a group of them was like stepping into a three-dimensional NBA Twitter timeline, albeit with much better takes. Between that and geeking out at every journalist I saw courtside, I realized that I was experiencing Summer League on many different levels; both a spectator and something of an enthusiast.

Around those two courts where young and fringe-level talent scrimmage for eight days, an entire basketball ecosystem spirals outward. It starts with the players, many of whom have no realistic chance of making an NBA roster, but extends to the fleets of coaches and assistant coaches, agents, scouts, journalists, bloggers and fans, who may all collectively find themselves in an arena better suited for a junior-college team. There, relationships are fostered and careers are made in the middle of that dry Vegas heat. Ball isn’t just life — it gives life.

The Spurs are a microcosm of that. If you’ve caught a glimpse of their bench this summer, you’ll have seen two long rows of aspiring basketball minds, which include current members of the team’s staff, a handful of European coaches who have flown over, and one Ginobili. The group watches studiously, passes quarterly box scores at each intermission, and eagerly listens to each huddle run by Summer Spurs head coach Will Hardy. Across the floor you may have seen, sitting in the back row, all the team’s heavy hitters, from Gregg Popovich and R.C. Buford to Becky Hammon, Ime Udoka and Chip Engelland, all watching the team’s year-round program at work. The games don’t matter, but basketball always does.

Obviously, plenty of people have, actual/practical/financial/professional reasons for attending Summer League, and I wouldn’t begrudge them for spending more time moaning about having to be at the event (the last in the NBA’s expansive calendar). But for me, Vegas was a chance to appreciate basketball and the league in different ways, and I hope to make my way back again. I’ll remember to pack chapstick next time.