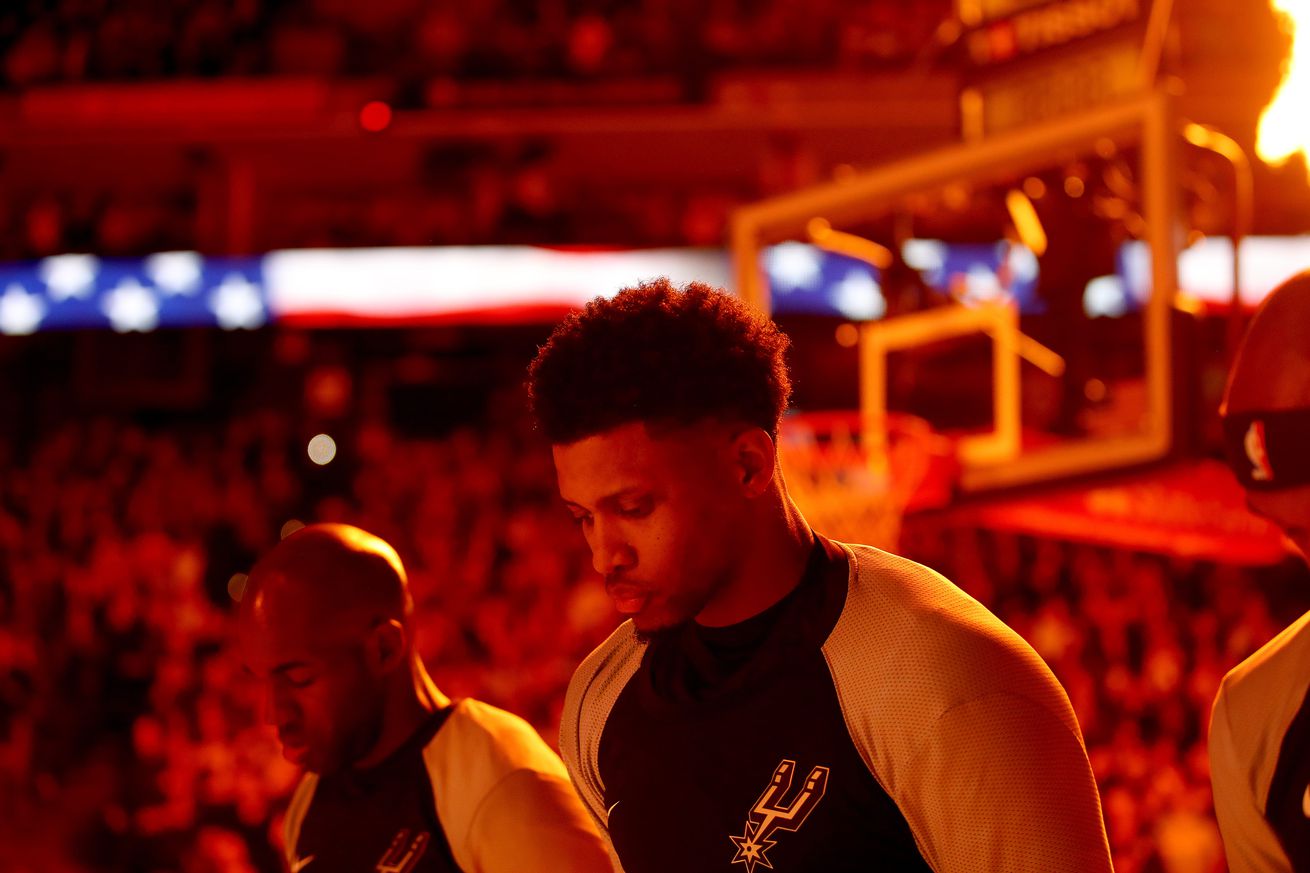 Love in the time of the Warriors.

As my sister and I walked into Oracle Arena earlier this month, I can’t say we were expecting much of anything out of the Spurs.

The night before the game it was announced that DeMar DeRozan and LaMarcus Aldridge would be sitting out and, as much as I love the motley collection of bandits we’ve assembled to wear Silver & Black this year, the chances of them waltzing into Oakland and pulling off a heist here felt pretty slim. I hoped they would maybe land a few punches and I would get the opportunity to watch some our young guys compete against the toughest competition this sport has to offer. A true, low stakes learning experience that would have me leaving the arena hopeful and excited for the future.

The Golden State Warriors are a generational collection of talent and I don’t think that’s even remotely hyperbolic to say. Not since the days of yore when like six NBA teams roamed the earth has this much skill and ability pooled together in one franchise. The starting lineup that walked out on the floor against the Spurs in this game featured Steph Curry, Kevin Durant, Klay Thompson, Draymond Green and DeMarcus Cousins. I’m not going to sit here and rattle of their list of accomplishments because, frankly, we don’t have enough time. Suffice it to say, they are extensive.

But I was determined to have fun. I was going to watch a team of guys I’m rather fond of square off against the Evil Empire. What a lark! What a fun and joyous basketball event!

Kevin Durant started the first quarter by making his first six shots. This didn’t seem weird or anything but it did feel a little ominous. It was the casual nature of this hot start that was particularly unsettling, almost like an automatic, quick 12 points from Durant were a given. The Spurs, to their credit, didn’t seem to be as intimidated by this display as I was. They gamely fought through it, hit a few shots of their own, and finished the first quarter down 2.

They weren’t doing anything out of the ordinary to slow the Warriors down, really. They were simply putting in the work. They crisply rotated on defense, limited second chance opportunities, and avoided letting any of their guys break out in transition for easy buckets. You could almost talk yourself into this being a viable strategy to win as long our guys kept hitting their shots and their guys didn’t go all supernova from deep like they’ve been known to do. I didn’t believe in miracles quite yet, but I was willing to consider the possibility.

With 3 minutes left in the 2nd quarter, Patty Mills knocked down a three to make the score 50-53 and the Warriors took a timeout to regroup. The arena, which had maintained a frenzied level of noise all night, had reduced down to more of an annoyed simmer. I made eye contact with a smattering of other Spurs fans in attendance and we all had the mischievous glow of kids who know that their bed time was 20 minutes ago but were still up watching TV. I turned to my sister and said the fatal words the would end up dooming the Almost Spurs in their efforts…

“You know, if we can keep this within 3 at halftime, I think we might actually be able to pull this off.” – Me, an Idiot

The next three minutes were equal parts horrifying and mesmerizing. The Warriors came out of the timeout like a hyperactive puppy that’d been let off it’s leash. Draymond tossed an alley-oop to Iguodala for a four point play. Klay Thompson picked Jakob Poeltl’s pocket and sprinted off for an easy layup. Belinelli missed a layup and four seconds later Steph drained a three.

Oracle arena was now a wall of sound, the fans overjoyed to see their favorite band finally playing the hits. In a less than two minutes, the Warriors had spun a 3 point lead into 14 without even really breaking a sweat. It was one of the most impressive displays of basketball I’ve ever seen. The Spurs managed to hold them scoreless for the remaining minute or so of the half, but the damage from this onslaught was done. In the 2nd half, the lead ballooned north of 20. Then 30. Then 40.

The Spurs simply had no answers for the Warriors. Does anyone?

I think it’s possible that we might’ve gotten desensitized to just how awesome the Warriors are and, when I say awesome, I don’t mean cool or good or fun. I mean it in the sense that they are awe-inspiring: extremely impressive or daunting; Inspiring great admiration, apprehension, or fear. That’s all I could think about sitting in my seat that night surrounded by people in blue and gold howling their heads off at each successive highlight taking place in front of their eyes. That this specific collection of talent is allowed to play on the same team is insane.

Not two months ago, you couldn’t log on to the internet without reading some piece about how the Warriors were falling apart at the seams. Draymond was yelling at Durant. Klay had his eye on heading to the Lakers. Steph’s injury issues were resurfacing. I must’ve listened to five different podcasts about how, no, really, this time it was different. This time all the winning and all the success and all the pressure was finally getting to the guys in the locker room. “Maybe this is the beginning of the end,” was the sentiment we all seemed to be desperately attempting to will into the universe.

I don’t know when the end is happening, but 2019 ain’t it. The Warriors are going to roll through the rest of the regular season, they are doing to dismantle every challenger in the playoffs and they are going to destroy whoever is “lucky” enough to make it out of the East. Oh, Giannis and Milwaukee are a sleeping giant over there? That’s a nice story. The Sixers have a Big 4 of their own, you say? Please. The Celtics always play the Warriors hard in the regular season? Seems legit. Every single one of these teams are bringing a knife to a bomb fight. The Warriors are playing a different sport than everyone else at the moment and the fact that they sometimes come down from Olympus and hang out with the mortals for a half or two doesn’t change that.

It’s fascinating to think about what keeps us engaged with a sport whose season is currently being bear hugged into oblivion by a rogue collection of Monstars. When the outcome of an individual season is all but ensured, why not take the season off? Why don’t we just come back in a year or two and see if things have gotten competitive again? Maybe some people have already checked out. It’s hard to blame them.

The unspoken contract that you sign up for as a fan is one that guarantees you a binary outcome to every season. Your team will either win the championship or it won’t and you’ve got a 1 in 30 shot at it. If this is the lens you choose to view things through, you are pretty much assured an unhappy existence in this sport. Even the Spurs, one of the most successful franchises in all of sports, has only managed to end the season with a win 5 times. If this were truly the only measure of success or happiness in the NBA then there is no way that the league could realistically keep going.

It’s safe to say that it’s not my favorite thing in the world that the Warriors, as they are currently constructed, exist. I think it’s annoying and frustrating and, sometimes, just a little bit unfair. However, they have forced me to reckon with what’s important to me as a fan. I don’t tune in on a random Tuesday night to watch the Spurs take on the Hornets because I think this matchup has some bearing on the outcome of this season. No, I tune in because I enjoy watching them play.

It’s a joy to see Derrick White go from being a lanky kid with a goofy haircut to being an indispensable part of the starting lineup. I’m heavily invested in watching DeMar DeRozan adjust and adapt to his new surroundings in San Antonio. I love seeing LaMarcus Aldridge become a leader on his own terms. It’s truly been fascinating to watch this franchise go through it’s various sea changes over the years. Go ahead and chart the journey in your head from David Robinson and the Alamodome and Fiesta colors through the Tim, Manu and Tony era all the way up to Lonnie Walker stepping on to the floor in Oakland the other night all wide-eyed and eager to prove himself as the next chapter in a storied legacy. This is the narrative that matters. This is the story that keeps us engaged.

I walked into the arena the other night thinking that I would leave it hopeful and excited about the future. That did not happen in the moment. In fact, I walked out into the night utterly gobsmacked after watching them lay waste to the Spurs in front of my eyes. It shook me to my core to witness firsthand the unstoppable force that’s been assembled up there in the Bay Area and I think it may have broken my spirit for a while.

Now that the shock has worn off, I think I’m starting to feel the hope and excitement return. The existential threat of a team like the Warriors will always color the everyday narrative in a certain light, but the reality is that they are just a chapter in the larger story. A challenge that our heroes will face along their way. One day, the Warriors run of dominance will come to an end, just like all runs inevitably do, and when that happens, the league will still be here and the teams will still suit up and the players will still go out and play. Whether we choose to care about it is entirely up to us.

The Spurs play the Raptors on Friday. I don’t think either team is going to win the championship this year.

I can’t wait to watch.