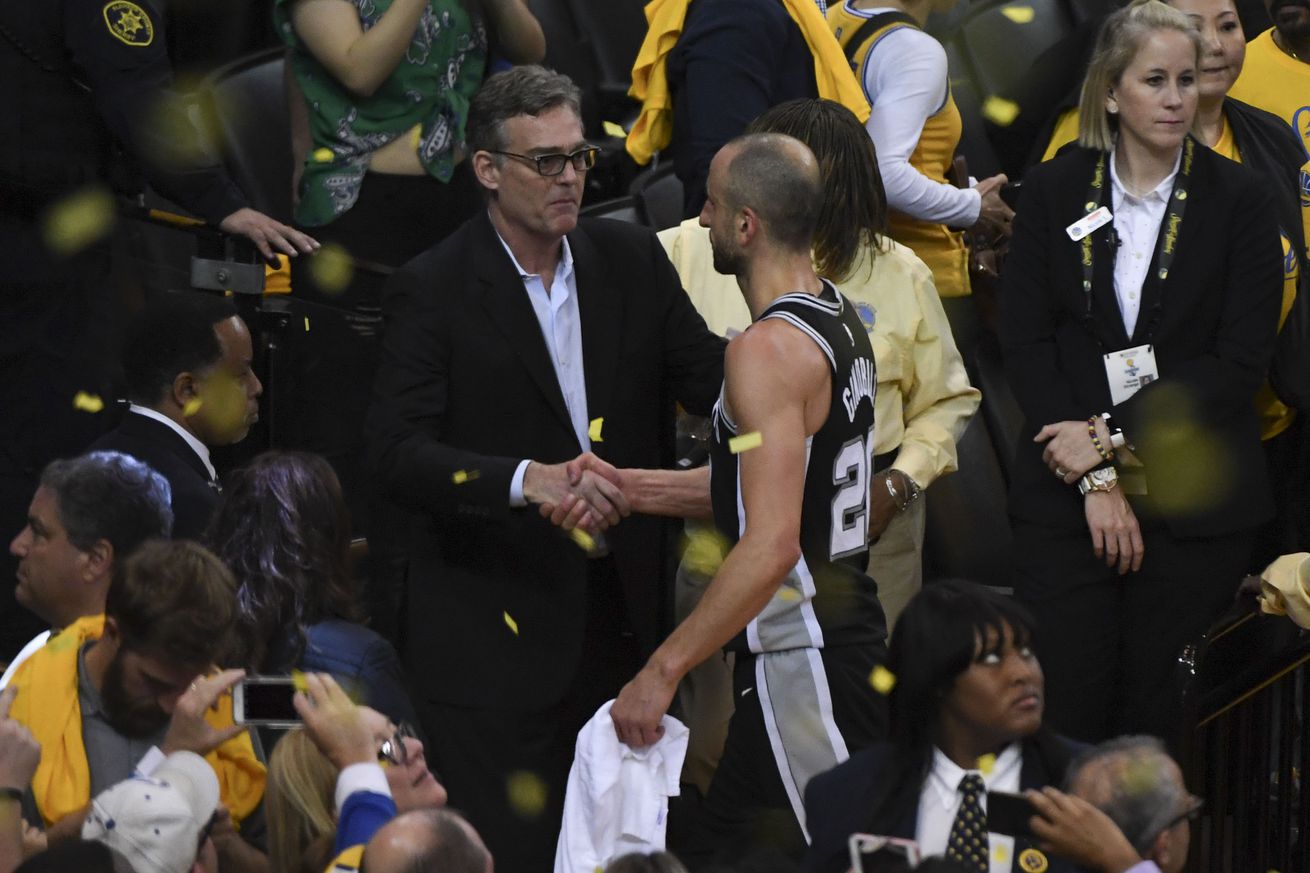 With the NBA draft coming up – after which the San Antonio Spurs will be once again be complimented on finding a good player that everyone else missed – it is time for my “end of the season” post.

At this point last year, I wrote:

This season confirmed what Spurs fans hoped for – they can survive (and thrive!) post-Duncan, and they have a transcendent star.
…the Spurs are the one team that can wonder “what might have been” if things had gone differently [i.e. had Zaza had not broken Kawhi] And that fact allows the Spurs to look back on the season with satisfaction. They can legitimately say they accomplished all they wanted to, did better than expected in the regular season with the second best record in the league, and went down fighting to a better opponent – but possibly “better” only because healthier.
That also means the Spurs can go into next season with hope – unlike the rest of the NBA. Which means the Spurs had a good season.”

Unfortunately, while the Spurs entered the 2017-2018 season with hope, the drama with their “transcendent star” overshadowed almost everything that followed. Kawhi’s issues proved to be totally unlike the normal situation in which the injured player undergoes surgery and the team has a reasonable estimate on the player’s return. The Spurs, and Kawhi, instead suffered through the frustration of never quite knowing…. anything.

Spurs fans, including me, never gave up hope for the Hail Mary pass – a Kawhi return. Even as the final weeks of the regular season wound down, all of us wondered whether the next Pounding the Rock headline would be “Kawhi Cleared for Full Contact Drills, Expected to Return Wednesday Night Against….” Of course, we never got to read that headline.

As a result, despite the high hopes entering the season, and the Spurs overperforming for much of the year, 2017-2018 was an odd, and somewhat lost, year. And we will never know what might have been. Especially in light of the latest Kawhi reports, we may never even get to see “what might have been” one year removed.

With 2017-2018 in the rearview mirror, we now begin the long wasteland of days, weeks and months with no NBA games at all. I will spend the dog days of summer thinking back on my favorite NBA memories.

As is now a tradition, like “One Shining Moment” at the end of March Madness, I will end this season with a list of Favorite Memories. Some from the distant past, some from the recent present.

I have replaced some past favorites with new ones, but the list will begin with the identical favorite thing that led off last year’s list. Of course, that “favorite” has a bittersweet feeling to it now – but it absolutely remains one of my favorite memories, and I am sure it is one of yours. Unfortunately, it looks like it will only be a memory going forward, not to be repeated or ever replaced:

Kawhi Leonard D’ing up on LeBron, or Durant, or Westbrook, or Curry, or Harden or whoever else Pop sends him after,
Coop in a defensive stance,
Stephen Curry looking for any opening to shoot a 3,
Kyle Anderson Slo-Moing a faster stronger defender,
DFish bellying up on a guy who is bigger faster quicker and more talented (even though Tony still dominated him),
Second-year players (like Dujante Murray and Davis Bertans) and D-Leaguers (like Bryn Forbes) developing before our eyes,
Jerry West dribbling hard right and pulling up for a jumper,
The Spurs Beautiful Gaming the Miami Heat off the floor in the Redemption Finals,
Robert Horry spotting up in the last minute of a playoff game,
Danny Green snuffing out an opponent’s fast break,
Wilt finger-rolling,
Victor Oladipo escaping OKC,
Magic in the middle dishing this way, wait, no, that way,
Patty Mills water-bugging into a three from down under,
Rick Barry under-handing,
The Oui Frenchman tear-dropping,
The Greek Freak Euro-stepping,
Dirk step-backing,
LaMarcus Aldridge mid-ranging (and saving the Spurs’ season)
Earl the Pearl spin-dribbling,
Klay Thompson heating up,
Pistol Pete (or Ricky Rubio) behind-the-back passing,
Chick Hearn hyper-ventilating,
Dr. J dunking,
Popovich teaching,
Worthy baseline spinning,
Westbrook attacking,
Lebron chasing down a seemingly uncontested breakaway lay-up,
The Great Duncan blocking a shot, controlling it, and throwing the long bounce outlet pass,
Stockton pocket passing,
And, of course, My Man Manu returning (por favor) — and giving basketball fans everywhere Uno Mas,

Yep, those are my favorite things.