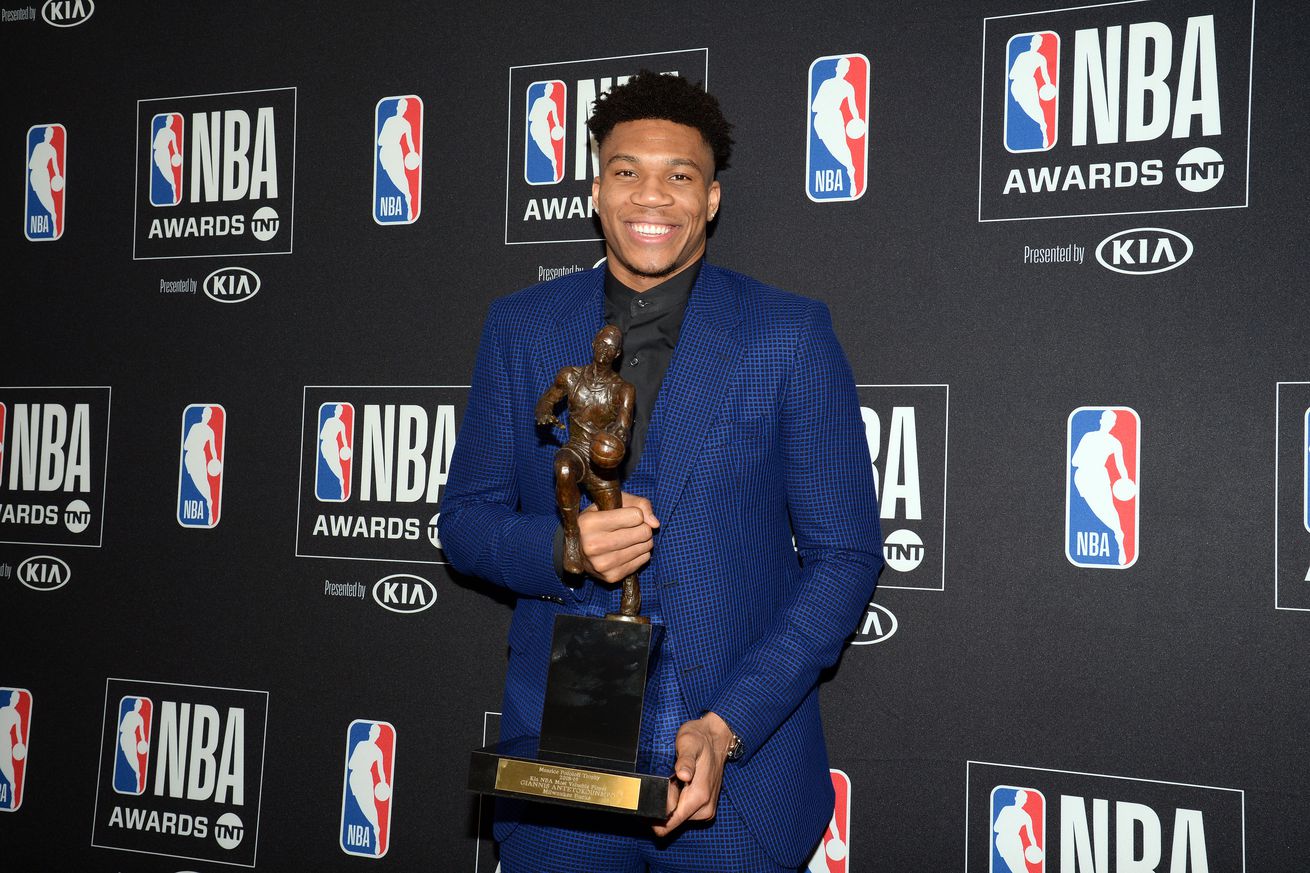 Recapping the 2019 NBA awards and determining if any Spurs are due for awards in 2020.

The NBA Finals wrapped up two weeks ago and the 2019 Draft is in the rear-view mirror. With all those important landmarks behind us, the league has finally announced the long-awaited winners of their many prestigious honors.

While we can all agree the NBA Awards Show isn’t the most timely ceremony of the year, TNT kept the presentation both heartfelt and cheery. A handful of new winners were ushered in, and a few familiar faces walked the stage to add to their trophy collection.

Who took home hardware? Did the voters get it right? And which of one of your San Antonio Spurs could be in the mix for an award next season?

Most Improved Player of the Year Award

‘It always seems impossible, until it is done.’@pskills43 | #WeTheNorth pic.twitter.com/Vz34DoagWk

Who Deserved to Win: Pascal Siakam

Pascal Siakam was the clearcut favorite for this award and the media members hit this one right on the head. Not only did the Cameroonian forward make considerable strides on the court this season, but he did so while seeing his role expand significantly for a championship contender.

Rarely do players take on such a heavy load without taking a hit to their efficiency, yet that’s exactly what Siakam did. His shooting percentages spiked across the board and his per game numbers improved in all categories but one.

This was an easy choice for everyone, and it really wasn’t that close.

Dejounte Murray was due for a breakout season before he tore his ACL in preseason play last summer, and he’s worked hard to get back on the court.

The fourth-year guard has been an absolute gym rat, and his minutes are set to rise once he takes back starting point guard duties. If he can turn his practice into production, few players will have an opportunity to catch him in the Most Improved Player of the Year race next season.

Get used to hearing his name this summer. Dejounte should be one of the most popular preseason picks for this accolade.

Rookie of the Year Award

Who Deserved to Win: Luka Dončić

There was little doubt who would win the second award of the night. Trae Young was spectacular, and Deandre Ayton was solid, but it’s hard to compete when your competition is mentioned in the same breath as LeBron James and Oscar Robertson on a nightly basis.

Despite coming in at just 19-years-old, Luka Dončić often looked like a man among boys last season. The Slovenian sensation dominated defenses in his first go-round and gave Dallas a foundational piece to build upon.

Dirk Nowitzki may be gone, but the future of Mavericks basketball is in good hands.

Although it’d be nice to see a San Antonio Spur in contention for Rookie of the Year, I wouldn’t hold your breath. Gregg Popovich is notorious for making rookies earn their minutes, and next year will be no different.

Keldon Johnson’s mix of defense, athleticism and shooting will give him a chance to see the floor, but that won’t be enough to compile the numbers necessary to come close with the rookies receiving the reigns from day one.

Sadly, no Rookie of the Year Award is making its way to Alamo City in 2020. Regardless, Keldon should be an intriguing pickup for the Spurs.

Sixth Man of the Year Award

Who Deserved to Win: Lou Williams

No surprise here. Lou Williams took home his second straight Sixth Man of the Year Award and third in his 14-year career.

The six-one guard led the league in bench scoring and became the NBA’s all-time leader in points scored off the bench this season. Did I mention he provided a steadying presence for an overachieving Clippers team that beat all odds to make the Western Conference Playoffs?

This was another no-brainer. Williams was born to get buckets.

Whether or not White places a bid for the Sixth Man of the Year Award will be entirely up to how Pop decides to utilize him.

If he can provide a spark off the pine like Manu Ginobili, then White has a fighting chance. If he starts next to Dejounte Murray, you can forget about it.

Even if he can’t contend for this end of the year honor, keep an eye on Derrick to challenge Murray for Most Improved Player next season.

Rudy Gobert wins the DPOY, & I still say he’s the most underrated player in the league. The guy does so many things the avg NBA viewer won’t see. pic.twitter.com/ZM9eRL8feJ

Who Deserved to Win: Rudy Gobert

Paul George and Giannis Antetokounmpo truly made convincing cases for this award. Unfortunately for them, Rudy Gobert made a better a one.

Gobert may not be the best perimeter defender in the league, but the mere sight of his insane wingspan is enough to deter slashers from attacking the rim. He sent shots into the stands and spearheaded one of the league’s best defenses this season.

Make it back-to-back Defensive Player of the Year Awards for the Steiffel Tower. It’ll be no small task to three-peat in 2020, but I have no doubt he’ll be in the conversation.

It’s no accident Murray became the youngest All-NBA Defender in NBA history two seasons ago. He was regularly assigned to lock down the best player on the court every night, and he was doing a fine job of it too.

The lanky point guard has added muscle to his slight frame since the last time we saw him, and he’ll be eager to show off that new-found strength on both ends of the floor.

Don’t sleep on the emergence of Derrick White on the defensive end either. The added help of another elite defender will go a long way for making Murray stand out from the crowd.

The @Bucks‘ Mike Budenholzer accepts the 2018-19 Coach of the Year trophy! pic.twitter.com/0f4hcaJKy8

Who Deserved to Win: Doc Rivers

I love Mike Budenholzer as much as y’all do, but Doc Rivers got the short end of the stick tonight. The Clippers roster was a revolving door and the man still made it work.

Los Angeles traded their best player at the deadline and somehow improved their record in the standings. That doesn’t happen unless you have an excellent head coach at the helm to keep morale and focus in check.

Budenholzer was no schmuck, Doc was just better.

There isn’t much to say here. Gregg Popovich is one of the greatest coaches in the history of professional sports and his impressive resume backs it up. Should he find a way to exceed expectations, then he has a legitimate shot to be named Coach of the Year for the fourth time in his illustrious career.

Most Valuable Player of the Year Award

Who Deserved to Win: James Harden

Listen, Giannis Antetokounmpo was a force to be reckoned with in the 2018-2019 regular season. I’ll even admit the Eastern Conference was better than it’s been in years. However, that doesn’t change the fact the Western Conference is a different beast altogether.

The Greek Freak was the best player on the team with the best record in the league, but James Harden and the Rockets weren’t far behind, and that has to count for something in a conference that’s home to superior competition.

Harden scored the most points per game since Michael Jordan averaged 37.1 during the 1986-1987 season. And forget the notion the score-first shooting guard can’t defend. It isn’t true.

Giannis would have been a deserving winner in almost any other year, but 2018-2019 was the James Harden Show. Even if history forgets, The Beard had a season for the ages.

If he couldn’t sneak his way into the All-Star game, (in perhaps his best season as a pro) he won’t be winning an MVP next season.

No knock on DeRozan, he’s one of the best in the game. DeMar simply isn’t an MVP caliber player and that’s okay.

A Spurs’ eye view of the 2019 NBA Awards Show
Source: Pounding The Rock