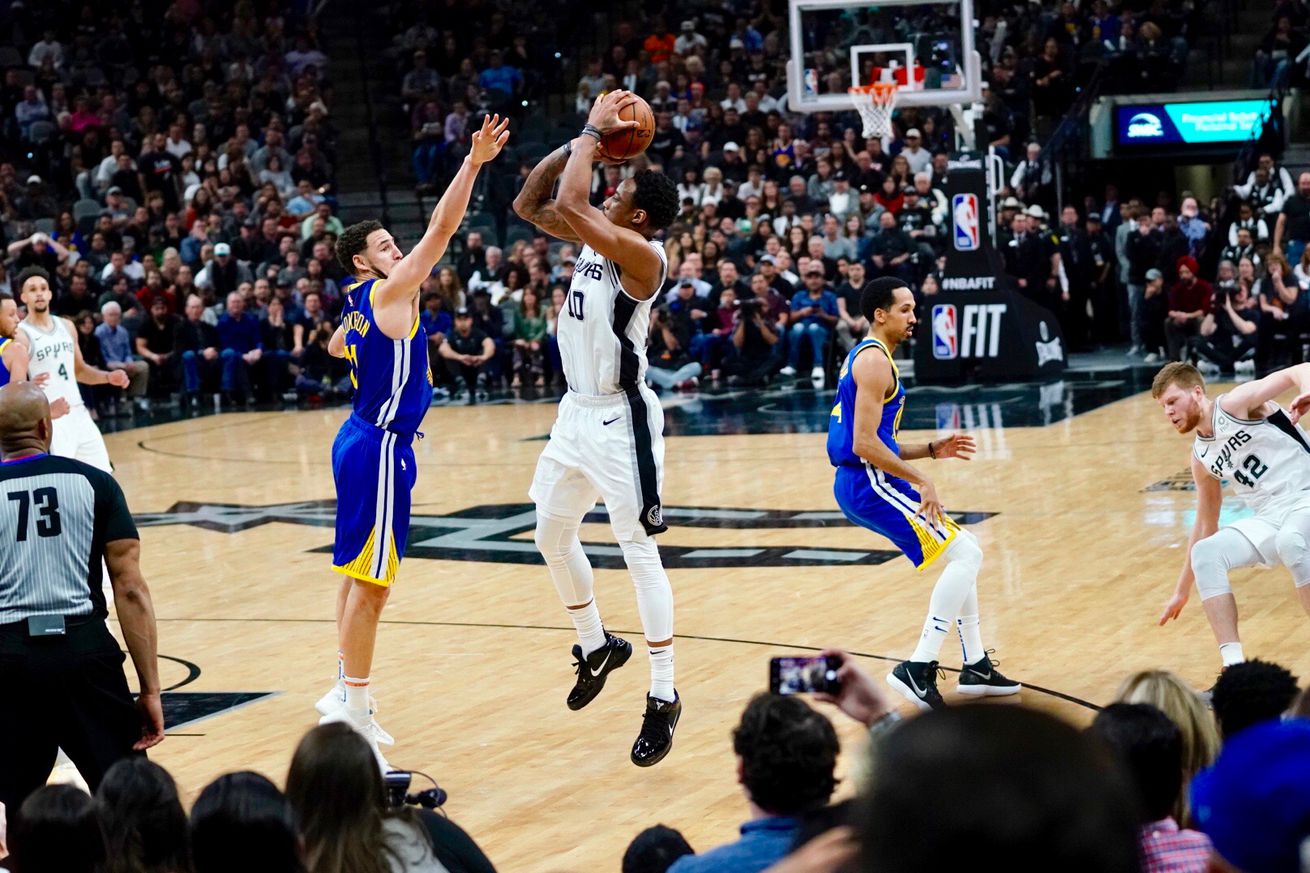 DeMar DeRozan has evolved into team-first star and is ready to prove his nay-sayers wrong.

It’s late in the fourth quarter, and the Spurs are clinging to a 109-105 lead over the Golden State Warriors. Late in a clock-burning possession, with 1:29 left on the game clock on 8 seconds left on the shot clock, DeMar DeRozan has the ball in his preferred spot in the left block.

The defender, in this case Klay Thompson, is draped all over him. He rotates to face the basket, takes a dribble, pump fakes, but there’s still no room to operate, and the clock is winding down. He maintains his pivot foot, does a 360 degree turn to create some separation, and pulls up for the contested shot with two seconds left on the shot clock. Swish.

DeMar goes to work in the midrange late in the 4th! #GoSpursGo

This may seem like a classic DeRozan play, and it is. It also demonstrated exactly what he has become in being part of the Spurs compared to his days with the Toronto Raptors, a team he loved and never wanted to leave. There, he was a superstar with less of a system to work within and more freedom to operate on his own. He also had a reputation for fading in the postseason, getting too bogged down in isolation, and not playing enough defense.

Following his trade to San Antonio, he had to evolve. Even if his notoriety as an inefficient gunner is overstated, there’s no denying that he has improved as a play-maker under Gregg Popovich’s watch. His career-highs of 6.1 assists and 27.3% assist percentage prove as much. Think about that: more than one of every four of his passes immediately leads to a basket for his teammates. He’s also having one of the best shooting seasons of his career. That’s not the player we were “warned” about from skeptical Raptors fans.

Similar to Rudy Gay, DeRozan is finding his most efficient form as a Spur and is shedding his reputation as an East Coast superstar with a sketchy playoff history. As such, he is becoming what passes for a star in San Antonio: unselfish, but capable of taking over when needed. All of which was on display for a national audiance with his 26 points, 9 rebounds and 8 assists against the defending champions, a stat line that would have been the night’s headline with the addition of a board and two dimes — just like it was for the one he got back in January against the team that traded him.

It was a celebrated feat, but one that seemingly took the last bit of wind from his sails to accomplish before he began his winter slump due to exhaustion and nagging injuries after he averaged the third most minutes in the NBA through December. In true Spurs fashion, he fought through the pain and was rewarded with the bright side of not making the All-Star team for the first time in four years: rest. Ever since the Spurs returned from the break, he has been rejuvenated and confident while leading the Spurs from the brink of failure to looking like a team capable of making some noise in the playoffs.

He has found the right balance between creating for his teammates and picking when to attack for himself, like that complicated shot over Thompson. While DeRozan may have never doubted his ability to make it, it was a long road getting there. The pressure was building, but he remained calm and decisive. Even his teammates knew this was his moment, allowing him to operate on his own, even in a play that seemed designed for a pass.

While that shot may have looked all but impossible to some, it never was for DeRozan. Just like many thought it was impossible for a superstar in the tenth year of his career to evolve in a new system, he has proven them wrong again by calmly just doing what he does and not listening to those distant whispers from up North saying to enjoy him now, because he’ll be gone for the playoffs.

He has spent his entire life proving people wrong, and he’s ready to do it again, even if those people who are doubting him now are the ones who used to believe in him the most.