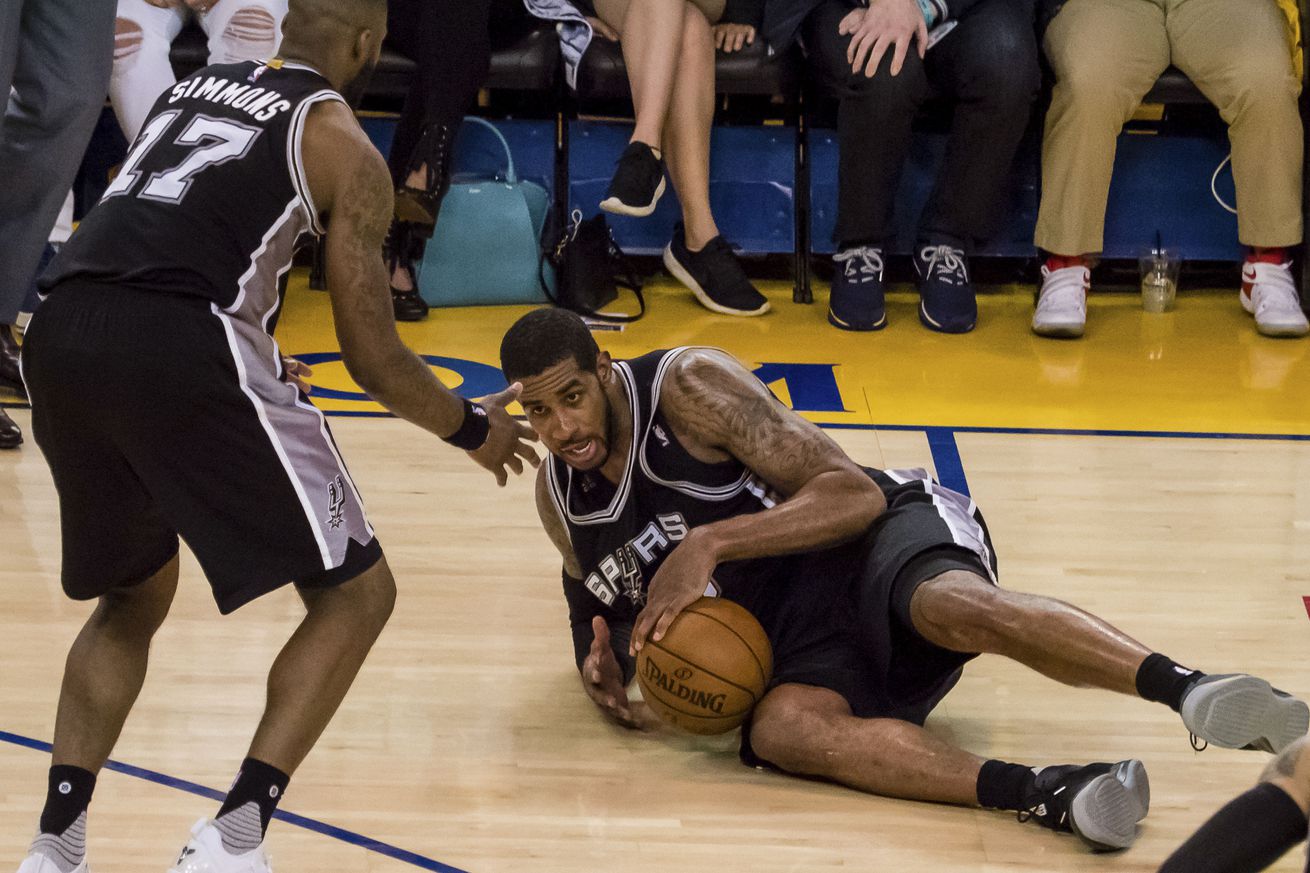 Whether Kawhi Leonard is available or not, the Spurs’ power forward needs to get well in the Western Conference Finals.

Much has already been said about LaMarcus Aldridge’s level of play in this postseason, and that’s because, frankly, there’s a lot to say. When he’s rolling, like in the Game 6 series-clincher against the Houston Rockets, it’s obvious why he was the most coveted free agent on the market in the summer of 2015. However, performances like his 4-for-11, four-rebound outing in Game 2 against the Golden State Warriors on Tuesday leave Spurs fans justifiably discouraged. Most confounding about Aldridge’s inconsistency is not so much the lack of production, but rather his wavering aggressiveness. When he is assertive and decisive, he can be one of the most impactful offensive bigs in the league. But his aggression comes and goes.

It seems as though the quicker Aldridge makes his decisions, the better he plays, and conversely the longer he holds the ball the more likely he is to miss or turn the ball over. I wanted to see if the eye test was substantiated by the numbers, so I compared his field goal percentages based on how long he held the ball before shooting. Here’s what I found (all numbers from NBA.com):

There are a couple things to note here: a) Aldridge has, on average, shot worse the longer he’s held the ball, b) he’s holding the ball a bit longer during these playoffs than he did during the regular season (note the frequencies). These patterns seem to hold, regardless of how hot Aldridge is from the floor. Take Game 6 against Houston, widely considered Aldridge’s best game of the postseason. He shot 16 of 26 from the field. More specifically, he shot 14/20 (70%) on shots where he held the ball 0-2 seconds. But he shot just 2/6 (33%) on shots when he held the ball for more than two seconds.

In addition to comparing Aldridge’s FG% by touch time, I also looked at number of dribbles:

Here, the correlation isn’t as linear, but two things jump out. Aldridge shoots much better when he doesn’t have to put the ball on the floor, and the frequency with which he dribbles before he shoots has increased enormously during the playoffs. Now, the first part makes sense – catch-and-shoot field goal attempts are generally higher quality shots than pull-ups or multi-dribble post-ups. The issue is that 58% of Aldridge’s shots came on zero dribbles in the regular season versus just 47% during these playoffs. One reason for this is the way Aldridge is getting his shots has changed in the postseason.

During the regular season, 19.1% of Aldridge’s shots came from the pick-and-roll, where he averaged 0.94 points per possession, a very solid number for a big who is primarily picking-and-popping. However, in the playoffs, just 10.8% of his possessions are being used as the roll-man, and he’s scoring an atrocious 0.64 points per possession. You can make the argument that he isn’t making shots out of the pick-and-roll, so they stopped running it for him. But the counterargument would be that Aldridge hasn’t been able to find a rhythm because he’s running it so infrequently in the postseason.

Some of those pick-and-roll possessions have turned into Aldridge isolation plays. He’s only using 7.7% of his possessions on ISOs, but that’s more than double his 3.4% isolation usage during the regular season. Regardless, Aldridge has not been good in isolation this year, regular season or postseason.

This season, Aldridge isn’t showing the kind of lift and explosion he had earlier in his career. His points must come from using his strength to get good position so he can use his size to shoot over defenders. One way to do that is to put in work before he gets the ball. Watch how lackadaisical Aldridge is in establishing position on this shot, prior to the catch:

Compare that to how much effort he expends burying Draymond Green here so that he can take a short fadeaway:

Aldridge can still be an All-Star level player on offense, but only when he’s playing aggressively and making quick decisions with the ball. Whether Kawhi Leonard returns for Game 3 or not, the Spurs will need Aldridge to play without even a hint of tentativeness to have a chance to win a game against the Golden State juggernaut.