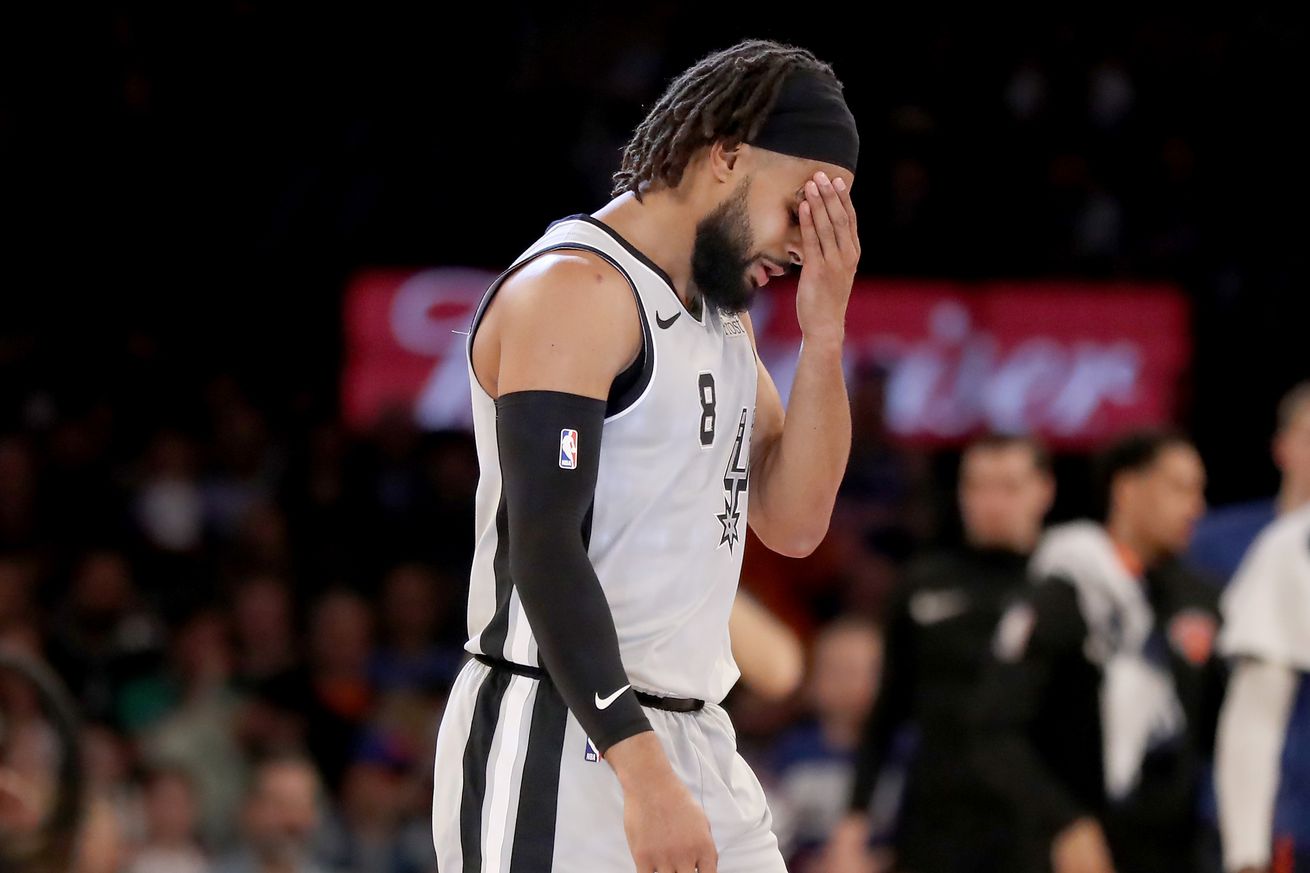 How to lose badly when you shouldn’t lose at all

The Spurs’ embarrassing loss to a tanking Knicks team that hadn’t won at home in nearly 3 months was chock full of poor effort and bad defense. Exacerbated by the Knicks’ hot shooting from deep, the Spurs’ inability to contain penetration left the team searching for answers.

The Knicks made a ton of threes, hitting 16/37, their 2nd highest total of the season, which made the difference in the game. With the Spurs hitting just 6 of their 24 attempts from the arc, if either team had shot their season average, the game would’ve been tied. But there’s little evidence that defenses have much impact on opponent three point percentages.

Players and teams get hot sometimes. When Damyean Dotson is hitting these in your face, there’s not much you can do.

But it really shouldn’t have mattered. When they’re locked in, the Spurs are good enough to overcome this type of shooting disparity. The silver and black squad that showed up to MSG on Sunday afternoon wasn’t ready for that kind of effort.

It was pretty obvious early in the game that the team’s energy level was low.

Rudy Gay comes up with the steal and hits Patty Mills running up the right side. But then Rudy and Marco Belinelli slow to a comfortable jog and watch as Patty tries a difficult contested reverse layup. John Jenkins slides right by them both to grab the rebound and brings the ball back up court.

On the other end, Patty hustles into position but tries to go under a moving screen from Mitchell Robinson, and with Jakob Poeltl dropping to prevent a drive, leaves Jenkins wide open from three. Instead of grabbing a 1 point lead, the Spurs found themselves down by 4 again.

That type of poor effort plagued the team throughout the game, but was especially visible as they gave up lob after lob in the 2nd half.

The first came just a few minutes into the 3rd quarter, and is the most understandable mistake of the bunch.

Dennis Smith Jr. draws the switch but Davis Bertans cuts off his penetration, so Smith feints a retreat to the three point line, drawing Davis back out for another attack. As soon as he gets enough room, Smith gets back to his right hand and blows by Davis. Jakob slides over to stop the drive, and DeMar DeRozan helps on Robinson, fouling him to prevent the dunk.

In real time, it’s hard to spot the mistakes, and it’s easy to blame Davis for the blow by. But that’s not really fair. Nobody should expect Davis to stop Smith here. His job is to push Smith towards the help defense, and though he doesn’t do as well as he needs to, the result should still not have been an easy lob.

The problem is that Jakob is still attached to Robinson when Smith starts to drive and DeMar is still as close to Alonzo Trier in the weak side corner as he is to his help responsibility. Knowing that Davis is going to need help, both should be pre-rotated, with Jakob spending as much time as possible a step or two farther away from Robinson, between Smith and the rim, before resetting his 3 second clock by stepping out of the lane or getting back to his man.

At the same time, DeMar should be essentially on Robinson’s back, able to contest the lob while still threatening the passing lane between Smith and Trier. But they’re both late, and by the time Jakob slides over, Smith is able to get the lob up in the air, and all DeMar can hope to do is foul hard enough to make Robinson earn his points at the line.

Sadly, the Knicks’ next two lobs were even easier.

Dante Cunningham just lets Robinson run right behind him, without so much as a stern glance in his direction.

Rudy’s in the right place here, down on the block, so when Jakob shows on the pick and roll he can pick up Robinson. Quincy Pondexter would then zone up the weak side by dropping down between Emmanuel Mudiay and Dotson in the corner, closing out on the first pass and relying on a rotation to close out to the second. But the play never gets that far because Rudy, for some reason, is still late getting to Robinson.

The 4th quarter was much of the same.

DeMar actually rotates on time on this one, but goes to the wrong spot. He can’t contest the catch, and the only thing that prevents another dunk is LaMarcus Aldridge hustling back down into the paint.

It’s Patty’s turn to be late this time, and his slap on the wrist just tacks another point onto the play.

Help is on the horizon. They’re much better with Derrick White on the floor, but he can’t fix all of this by himself. Every player on the court has to be aware of what’s going on, anticipate what will happen next, and be prepared to execute their help responsibilities. There’s simply no other way to defend NBA level offenses, even the bad ones.