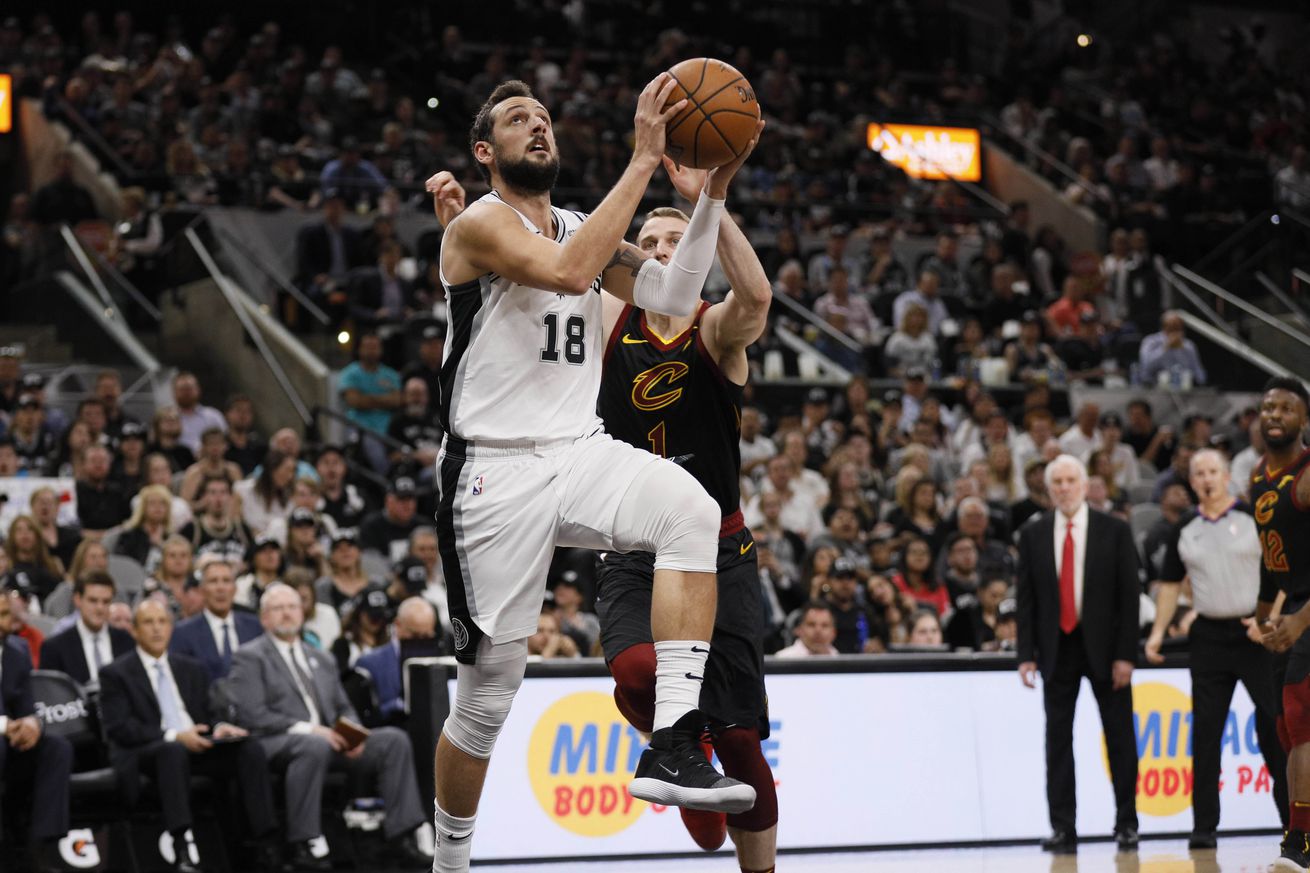 For better or worse, Belinelli was exactly who we thought he’d be.

I love Marco Belinelli. He was a big part of one of the best San Antonio Spurs teams in the history of the organization. He’s both exciting and frustrating, oftentimes within the same game or even possession. He is worthy of the Marco Watch segments brilliantly constructed by Charlie Thaddeus. He would have been the perfect addition to a team featuring Kawhi Leonard. As it turns out, he was only a decent addition to a team featuring DeMar DeRozan.

It’s been noted many times before that the Spurs prioritized offense over defense last summer. They were so accustomed to finishing inside the top five in three-point percentage that I believe they overreacted slightly to last year’s outlier of finishing 27th overall. In a vacuum it seems to have worked, as the Spurs ended up 1st in three-point percentage this season. In actuality, the Spurs’ shooting woes would have almost certainly corrected itself by letting Kyle Anderson walk and resigning their other free agents.

Belinelli’s three point percentage of 37.2 was only the 8th best percentage on the team, lower than Pau Gasol, Davis Bertans, Bryn Forbes, Rudy Gay, and Patty Mills, all of whom were on the Spurs’ roster the season they finished 27th overall. It was simply — or not so simply — a team-wide shooting slump, likely having something to do with the distractions that surrounded the team during that time. Instead, the Mid-Level Exception could have gone towards signing a wing defender, something the Spurs were severely lacking this season.

There’s no way to sugarcoat it: Belinelli is really bad on defense. Pop jokes around to the media that Belinelli doesn’t play defense, which is frustrating considering I’ve seen countless Spurs players benched for missing defensive assignments. The fact that Belinelli gets a pass is beyond me. Mills and Forbes are not good defenders, but at least they show effort on that end. Belinelli just looks lost half of the time. His deficiency on the defensive end this season was reflected in his Defensive Real Plus Minus of -2.61, which ranked him 109 out of the 115 players in the NBA who are considered shooting guards.

Offensively, Belinelli was exactly who I thought he would be. His Offensive Real Plus Minus of +0.62 ranked him 25 out of the 115 players in the NBA considered shooting guards. We saw glimpses of the Beautiful Game Spurs this season, and Belinelli was one of the driving forces in those moments. He’s dangerous moving without the ball, never allowing his defender a moment’s rest.

In typical Belinelli fashion, he had a higher Points Per Possession (PPP) this season when he was guarded (1.207) than when he was unguarded (1.157). This was likely just a fluke, but I found it to be the most Belinelli thing ever.

With a PPP of 1.12, the Spurs were the number one team in the NBA in spot up shooting this season. Belinelli finished the season with a PPP of 1.079, which was the 5th best average out of the Spurs’ players who were part of the regular rotation. With that being one of his main skillsets, you’d like to see that number a bit higher, though he was by no means poor in this regard.

In the playoffs, the Denver Nuggets did a great job of nullifying the Spurs’ bench unit, and Belinelli was no exception. He averaged 5.9 points in 19 minutes per game on only 36.8% shooting. I wasn’t a huge fan of the fact that he continued getting minutes during his struggles, but in looking back at the series as a whole, so many players were struggling that I don’t think Pop had much of a choice.

The bench unit had been so good during the regular season that it was a bit of shock how they played in the postseason. Maybe it shouldn’t have been a shock considering the Nuggets were the best team in the NBA in defensive three point percentage during the regular season, and the Spurs’ bench consistent of a bunch of players who rely solely on moving the ball around to generate looks from deep. Even with the regular season success of the bench unit, I think the playoffs showed how the Spurs need playmakers coming off the bench. They can’t completely rely on generating open looks through ball movement when the opposing team has time to game plan for this exact strategy.

Because of Belinelli’s struggles on the defensive side of the court, he scores fairly poorly in terms of advanced statistics. Even with the Spurs’ bench playing well this season, his Value Over Replacement Player was 0.0 this season, meaning he didn’t really provide much value in his role. He ended the regular season with a positive net rating, with the majority of that damage being done against opposing benches. Still, I can’t penalize him for faring well against bench players, as that was the role he was expected to fill this season.

Belinelli is coming off a season where he put up numbers almost identical to his career averages. I wouldn’t feel too heartbroken if the Spurs were to reduce his role next season or move on from him this summer altogether if it means finding more of an identity on the defensive side of the court. What I’ve noticed from watching the playoffs this season — and most seasons really — is that scoring is fun during the regular season, but it doesn’t mean too much in the playoffs when the game slows down and the opposition has time to game plan. Teams who have shown they can get stops down the stretch of a game have been the teams with the most playoff success.

Belinelli played extremely well in the month of January, averaging almost 14 points on 47/46/97 percent shooting. I’m going to select two games from this timespan, which was a home-and-home against the Oklahoma City Thunder on January 10th and 12th. In those two games, Belinelli averaged 21.5 points on 14-20 shooing overall, 9-11 from three, and 6-6 from the free throw line. Watching the bench in the videos below kinda bummed me out thinking about their disappearing act in the playoffs.

For better or worse, Belinelli played exactly how I expected him to going into the season. The success he had coming off the bench during the regular season cannot be ignored, but his continued defensive struggles and issues in the playoffs left me feeling a bit cold when all was said and done.

Up next: Davis Bertans