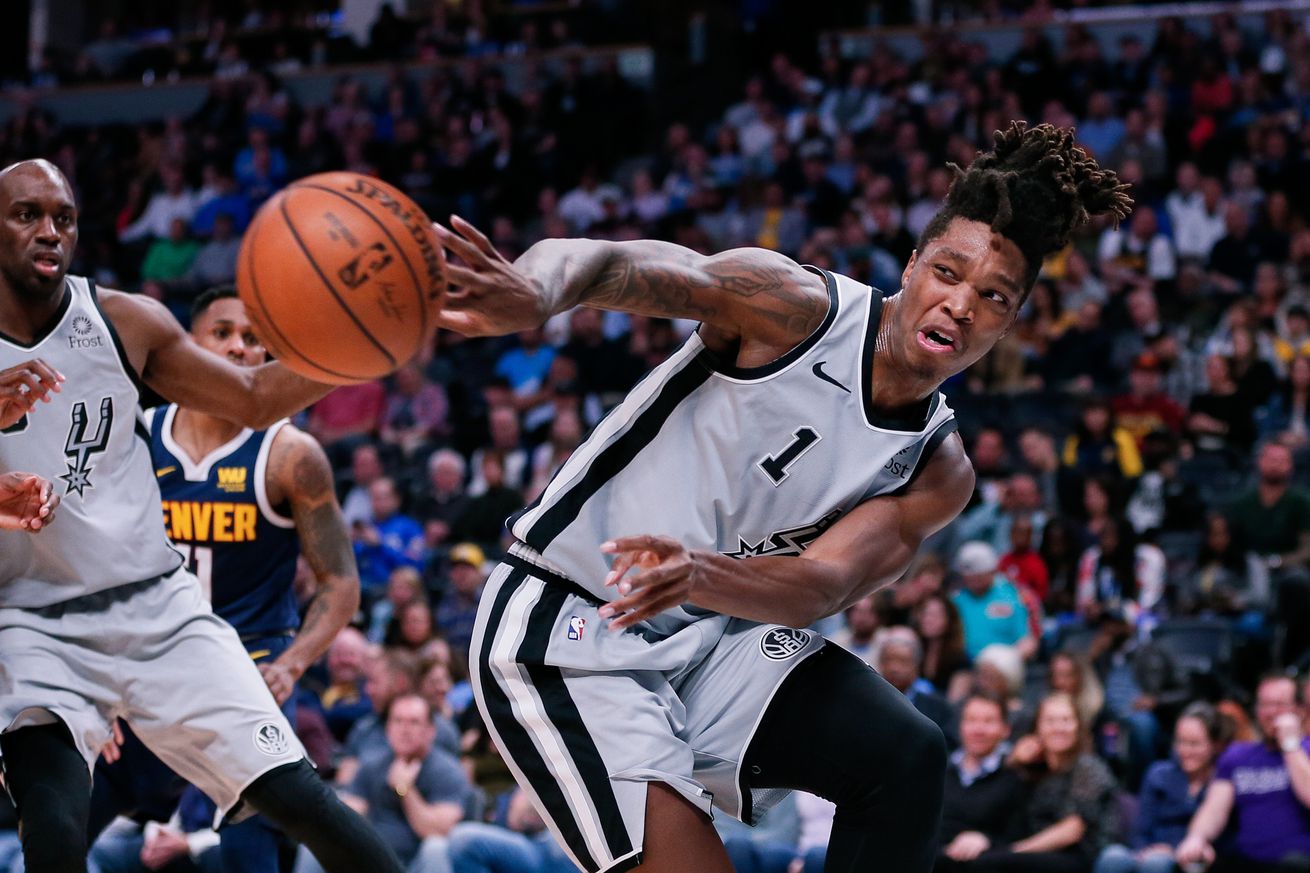 The high-upside rookie is still a work in progress.

Lonnie Walker IV was drafted 18th overall by the San Antonio Spurs in the 2018 NBA draft. The fact that 18th was the highest selection the Spurs have had since drafting Tim Duncan first overall in 1997 shows the greatness of the Spurs over the past two decades.

Fair or not, Walker IV was almost immediately considered a draft night steal inside NBA circles. After the draft, Spurs’ GM R.C. Buford talked about how they had explored the possibility of trading up to 11th to draft Walker IV since they did not expect him to still be on the board at 18. In the end, injury concerns caused Walker IV the drop slightly and the Spurs were able to draft him without having to give anything up. It seems as though PATFO truly got their guy.

Walker IV only played 118 minutes in the NBA, so his grade will be mostly based on his time spent in the G-League with the Austin Spurs.

If you were under the age of 25 and played the guard position for the Spurs, there was about a 100 percent chance you got injured in the preseason. Walker IV was no exception, tearing the meniscus in his right knee for the second time in under two years. With injury concerns surrounding Walker IV before the draft, this wasn’t the best way for him to start his career in silver and black.

His injury delayed his G-League debut until November 30. He was clearly itching to get on the court, as he put up 13 shots in 20 minutes. He connected on seven of those shots, showing a knack for getting to the rim along with a smooth mid-range game.

Walker IV had no trouble getting into the paint throughout the season, as 42.5% of his field goal attempts came from this area of the court. The issue came in his efficiency, where he connected on only 54% of his attempts from inside the restricted area and 39% from inside the non-restricted portion of the paint. In general, you’d like to see those percentages be above 60% and 45%, respectively. Below shows the shooting percentages of the other guards on the Spurs’ roster.

It is a reasonable assumption that the paint protection will be tougher in the NBA than what Walker IV faced in the G-League, so he will need to continue working on his body control and his ability to finish in traffic.

Walker IV will fit in nicely with this iteration of the Spurs, as he finds comfort in the mid-range. Around 35% of his shots came from this area, and he hit them at a respectable clip of 42.4%. He also shot 36% from distance, setting himself up to be a triple threat scorer in the NBA in a couple years.

Walker IV wasn’t much of a distributor in the G-League, averaging a decent but unspectacular 1.5 turnovers to 1.8 assists a game. He’s shown glimpses of great court vision though, so this is something I expect to become a strength of his over time.

He has all the tools to be a good-to-great defender at the next level. He averaged 1.2 steals in 27 minutes in the G-League, but he had the tendency of letting guards get past him on the wing. With even quicker guards in the NBA, this will be something he will need to work on. Luckily, the majority of the Spurs youngsters are above-average defenders, so he will have plenty of help.

Advanced statistics were not on Walker IV’s side. Due to his inability to finish in the paint and a propensity to shoot too often from the midrange, he ended up with a subpar TS% of 50.8%. He also had a net rating of -6, a Box +/- of -4, and a VORP of -0.6. Though some of this certainly had to do with the teammates that surrounded him, he also had a negative net rating when playing with Drew Eubanks and Ben Moore. This isn’t great considering those two players were the best two players on the Austin Spurs from a net rating standpoint.

Walker IV certainly has some fine tuning to do over the next couple years, but he’ll only be 20 years old when the 2019-2020 season begins so he has plenty of time to grow. His upside is off the charts, but it’ll be important for all of us to be patient in his development.

I expect Walker IV to have a more prominent role in the NBA next season, but he will need to continue working on all aspects of his game in order to find success. The good news is that he won’t be the focal point of the offense in the NBA like he was so often in the G-League, so he should have more room of which to operate. Of all the young players on the roster, he has the highest ceiling as a multi-faceted shooter. His ability to spread the floor will be extremely important, especially if the Spurs make some offseason moves to replace some of their veteran shooters with more capable defenders.

On March 8, the Austin Spurs hosted the Raptors 905 at the AT&T Center. My wife and I attended the game, and Walker IV’s performance in that game was a microcosm of his entire season. He went 1-6 in the first quarter, missing two point blank shots at the rim. He then disappeared for the 2nd and 3rd quarters, going 2-4 during that timespan. In an attempt to get the Spurs back into the game in the 4th quarter Walker IV took over, going 5-10 from the field including 2-3 from distance.

Even though he finished with 22 points and 6 rebounds, he finished with a team worst plus/minus of -15. His touch around the rim has not yet caught up with his speed and athleticism, oftentimes leading to a lack of control on his layups. He missed five shots from the paint in this game, four of which came from inside the restricted area. He also had the tendency to disappear through long stretches of games, something he will need to work through once he becomes more comfortable on the court.

I can’t completely ignore the advanced metrics and the inconsistency in the G-League just because I want to anoint Walker IV as the future face of the franchise. His athleticism, shooting, and defensive potential is something the Spurs desperately need more of, but it would be a mistake to put so much pressure on a 20-year-old on a team with plenty of veterans to help ease him into his role.

I don’t care what Stephen Jackson says while trying to stay relevant on television, I don’t buy into this narrative that the Spurs hold back their star players early in their careers. Kawhi Leonard had a lot of holes in his game five or six years ago, which is why we didn’t see him taking on a prominent role early in his career. Only through the hard work of both himself and the coaching staff did he get to where he is now. Derrick White would not have had the success he had this season had it not been for his experience in the G-League. Tim Duncan played almost 40 minutes per game in his rookie season, so when a player is ready, Pop has no issue unleashing him to the rest of the world. How many good, young players do we see flame out in the NBA because they are not put in the right position to succeed?

When Walker IV is ready, Pop will give him the opportunity to be the best version of himself.

Up next: Dante Cunningham