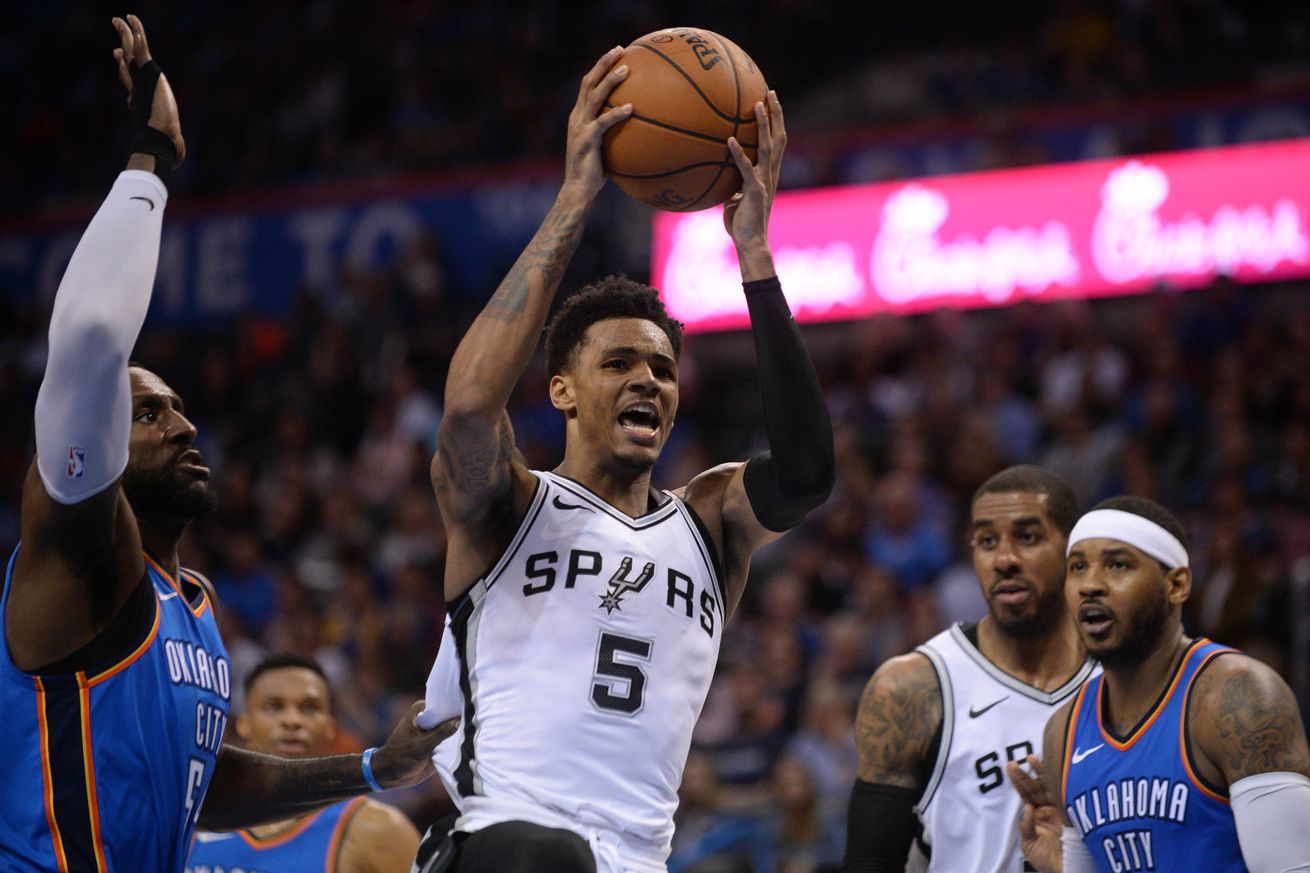 All it took was the season-opening tip-off vs. the Minnesota Timberwolves on October 18 for Dejounte Murray to make a bit of Spurs history. Specifically, he would become the first player not named Tony Parker to start the season at point guard for the Spurs in 16 years: an honor that previously belonged to Antonio Daniels in 2001. The fact that Murray merely scored the Spurs’ first bucket of the season on his way to 16-point opener was just the cherry on top.

However, while everyone knew he would eventually relinquish the spot back to Parker once he returned from a quad injury (which turned out to be in Game 20), Murray only maintained the job through the first seven games as inconsistency set in, and the world was reminded that he was in fact just a raw, second-year player with little prior NBA experience. After averaging a stat line of 13.3 points, 9.7 rebounds, and 4.7 assists on 56.7% shooting in his first three games, he would go on to average just 5.8 points and under 40% shooting over the next 44 games with just 11 starts.

Then, a huge decision was made by Gregg Popovich. For whatever reason — be it Parker’s stalling recovery, the need to infuse more athleticism into the starting lineup, or provide more play-making off the bench — Pop decided it was time to start Murray again, and this time he made sure it would remain his job for good. Over the final 34 games of the regular season, he averaged 10.5 points, 7 rebounds, 3.4 assists and 1.8 steals on 46.9% from the field. While the offensive numbers aren’t anything to brag about for a starting point guard in today’s game, it was his defense that would become his ultimate calling card.

With a 7’0” wingspan and improving basketball IQ, Murray can guard multiple positions and is learning how to be a menace to his opponents without fouling too much or falling for as many pump fakes. Despite a near 550% increase in minutes from last season, Murray still managed to slightly lower his personal fouls per 36 minutes from 3.2 to 3.1. Although his ball handling skills and decision making still need some work (besides Kawhi Leonard he averaged a team-high 1.7 turnovers per game), he never sulked or gave up on a play, but rather got back on defense, sometimes resulting in getting the ball right back.

All his effort on that end resulted in a All-Defensive Second-Team appearance, making him only the third Spurs guard to accomplish that feat (along with Johnny Moore and Danny Green). He was the only player in the NBA under 6’6” to record at least 400 rebounds, 90 steals and 30 blocks this season, and with 459 rebounds he set a Spurs franchise record for the most rebounds in a season by a point guard while grabbing an estimated 22% available rebounds when he was on the floor. Don’t be surprised if he breaks his own record multiple times as his minutes rise from the 21.5 per game he averaged this season.

Murray already has the makings of a true defensive stud, now he needs to keep working on the other half of his game if he wants to meet his true star potential. As previously mentioned, his decision making with the ball needs to improve, but even more so he needs to work on refining his shooting touch. While he showed improvement inside the three-point line this season with a developing floater and mid-range shot, his numbers are still below average for a guard, especially from beyond the arc, where he only shot 26.5% this season on 0.4 attempts per game, down from 39.1% on 0.6 attempts last year.

He doesn’t have to be a superior three-point shooter to be an elite guard, but developing his outside shot enough to at least keep defenses honest will help his driving and play-making ability, as well as make life easier for his teammates on the offensive end when defenders can no longer leave him alone once the ball is out of his hands. Another summer with Chip Engelland and some hard work should definitely help.

Even at 21-years-old Murray is already showing leadership qualities and a calm demeanor that the Spurs value. Combine those qualities with his superior work ethic, and he already has the looks of the Spurs next franchise point guard. Now it’s up to him to take things to the next level.

Up next: Manu Ginobili